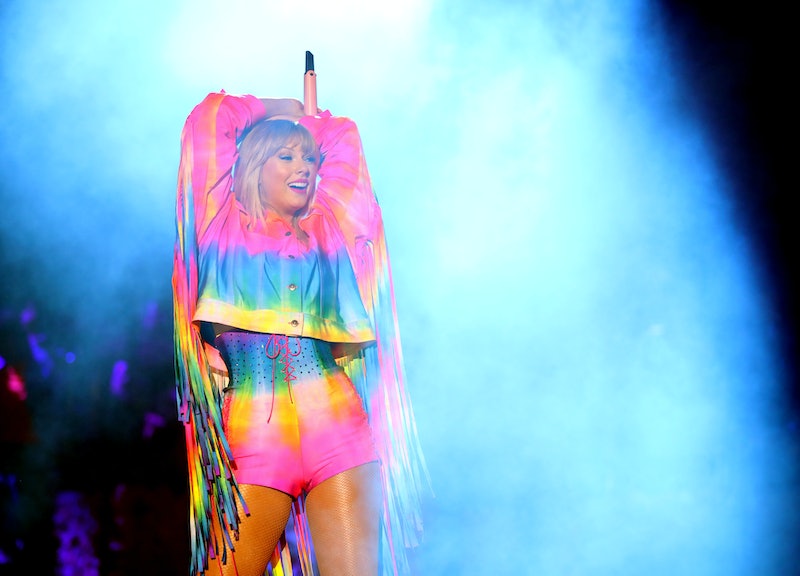 You probably never expected Taylor Swift to have a massive back tattoo, but it's 2019 and here we are. On June 14, Swift released her second single "You Need To Calm Down," and the cover may surprise you. On the single art, Taylor Swift's back tattoo is out in full force, but is it real? You probably already know the answer to that is no, but that ink is so massive that it deserves attention.

On June 13, Swift took to her Instagram account to announce several exciting things related to her new album. First, her full album will be entitled Lover. Second, she was releasing a new single "You Need To Calm Down" at midnight, and finally, that she and designer Stella McCartney are working on a collaboration. Basically, Swifties got a lot of new and exciting information all at one time.

The most immediate thing fans received, though, was Swift's new single, but they got another surprise, too: Swift's massive back tattoo. If you look at the single's artwork, it's not exactly hard to tell that the ink isn't real. However, that doesn't mean that it doesn't hold a special meaning for fans who have been following the "Me!" singer for a while now. Let's be honest, if you think that Swift doesn't know exactly what she's doing when it comes to imagery, you haven't been paying attention.

At first, viewers likely just see the massive expanse of butterflies across the "Me!" singer's upper back. However, the bottom portion of the tattoo is just as important. What seem to be two curled snakes are in the very center of her back, and if you followed Swift during the Reputation album era, you'll know that snakes were a major motif for her. The singer used the snake imagery to embrace and also combat the negativity surrounding her as well as confront the infamous (though now squashed) feud between she, Kim Kardashian, and Kanye West. Swift embraced the snake as a way to fight back during Reputation, but now, she's ready to move on. Her back tattoo proves it.

Swift's first single from her album, "Me!," featured a similar motif to the back tattoo on the cover of her new single. At the beginning of the "Me!" music video, fans are greeted by a snake slithering over the ground. Right before the animal strikes, it explodes into butterflies. It's an almost identical image to the one on Swift's back for "You Need To Calm Down."

If you think the snake to butterfly imagery Swift is repeating doesn't mean anything, you don't know the singer very well. Swift is all about leaving Easter eggs for her fans, and her songs and the imagery she chooses to use have long been about her personal life and personal growth.

With the massive back tattoo on the single's cover, Swift seems to be continuing to let her fans and the world know that she has moved on from the tough times of the Reputation era and is embracing all things beautiful, colorful, and positive. If you don't believe that, just listen to "You Need To Calm Down." Swift's lyrics are all about ditching the drama.

While a Taylor Swift back tattoo may not have been something you ever saw coming, don't worry. The ink is definitely not real, but it does represent the singer's move to a more positive, beautiful place. If tattoos are all about expression, then Swift is saying that it's time to spread her butterfly wings and fly.