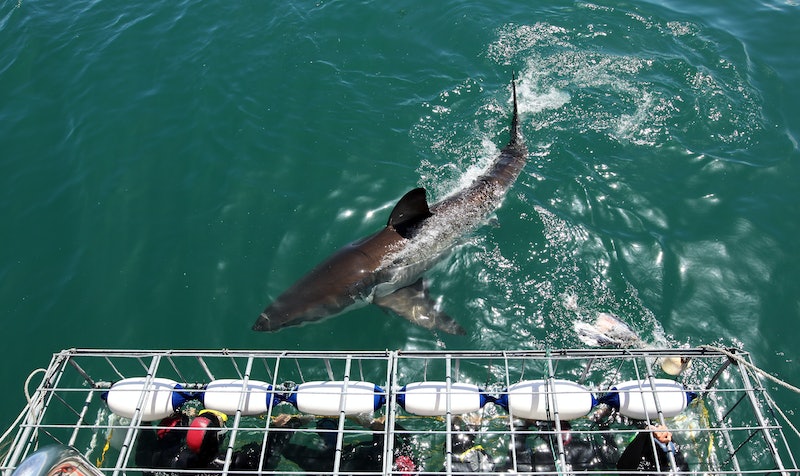 Shark Week is o-fish-ally upon us, and that means a fresh slate of shark-infested programming. Among the most dangerous-sounding draws on this year's Shark Week schedule is The Lost Cage, a special that follows a team of explorers floating in a "one-of-a-kind shark cage" like human lures in the open ocean. Longtime viewers know that investigators and divers have put their lives (and limbs) on the line for research before, so it shouldn't come as a surprise that The Lost Cage is a true story.

With little information outside of the promotional description, ("A team of explorers float in a one-of-a-kind shark cage, 500 miles into the Gulf of Mexico. Acting as human lures in the open ocean will they encounter its deadliest shark?”) it's difficult to tell what the show will entail or what facts are backing it. But in recent years, Discovery has recommitted itself to educational-only content when it comes to Shark Week, so the events in The Lost Cage are, indeed, real.

Some may recall that the network caught flack in 2013 for a handful of "fictionalized" documentaries. First, with Megolodon: The Monster Shark Lives, which followed a fake narrative suggesting the massive (but extinct) species was still roaming around the ocean, and then again with Voodoo Shark, about a mythical shark monster called "Rooken" that dwells in the Louisiana Bayous.

Both championed pseudoscience over cold hard truths, marking a shift from Discovery's informative focus to pure, unabashed entertainment. They were ratings magnets, to be sure, but many fans weren't pleased, and some of the researchers depicted took umbrage with the way producers went about it; Marine biologist Jonathan Davis, who was featured in Voodoo Shark, claimed to Gizmodo in 2014 that he'd never been given a straight answer as to what the project was about or how his interviews would be included. He said:

"I asked a few of the crew members, including the producer, what the show was going to be about. I never got a straight answer and the producer seemed to avoid the question. I was just told it would be combined with some other filming to make one show about Louisiana shark research."

Instead, he continued, they edited his comments to make it look like he believed in the Rooken and was searching for it, when in actuality he was simply studying bull sharks in Louisiana's Lake Pontchartrain.

Other scientists, like Ellen Prager and David Shiffman, told NPR in 2015 that they were fed up with Discovery's tendency to emphasize shark attacks and feeding frenzies — a rare occurrence in the wild — as well as what they perceived as misleading frameworks and a general neglect for factual accuracy. "[Megolodon] was presented in such a way that you could very easily watch it and not know it was fictional," Shiffman told the outlet at the time.

In response, Discovery vowed to "turn over a new fin" and stop producing fake documentaries. ""We've toyed with a lot of different types of storytelling over the years," Howard Swartz, then the head of development and production, told NPR. "And I just think now in a forward-looking direction, I think we wanna focus more on the research angle."

This year's schedule, for the most part, seems to reflect that. There was some creative maneuvering when it came to the much-hyped face-off between Michael Phelps and a (superimposed) great white, but let's be real, we all knew he wasn't actually going to race a shark in unprotected waters, and he was upfront enough about that in interviews. So The Lost Cage should be strictly factual too — which makes the human lures bit all the more intriguing.