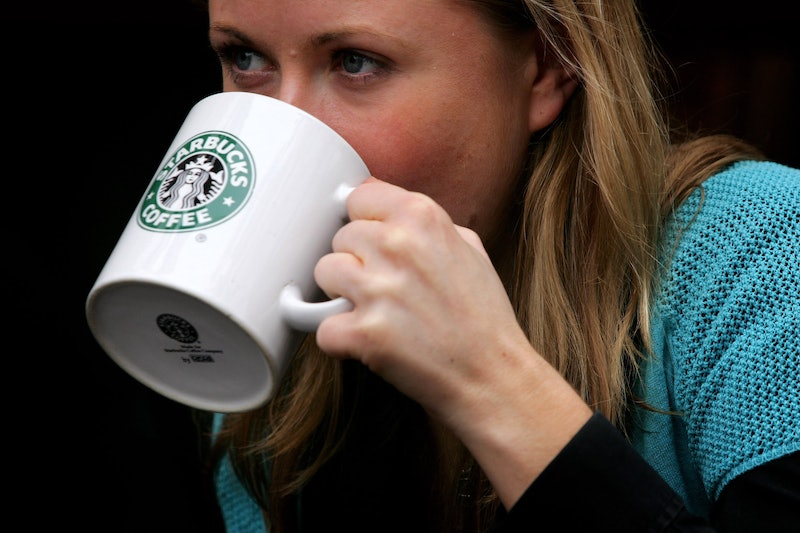 If you haven't been following the official Starbucks Pumpkin Spice Latté Twitter account, you're missing out — follow that sassy tweeting cup of pumpkin goodness ASAP. But, if you have been following it, you know that it's been throwing all sorts of clues and cryptic messages our way, basically announcing that the return of the PSL is imminent... but not saying when, because of course, they want to keep us all on edge.

I mean, you literally might be pulling your hair out trying to understand what the heck it's trying to tell us, and I don't blame you. I'm pulling out hair out over here, too. Yesterday, the official PSL account tweeted a picture of the latte surrounded by popcorn, with text reading "STARBUCKS FACEBOOK. SEPTEMBER 1ST. I'M EXCITED POPCORN'S EXCITED GET EXCITED!!!". Mind you, if you're not familiar, the PSL always tweets in a sort of vague, millennial, netspeak — because it's talking to its biggest fans in a language they speak. So it's not the wording of the tweet that has us confused, it's moreso the lack of words that's really making us wonder.

It's not clear when the PSL will be returning, but it is clear that something big is happening on Sept. 1, and that we'll need to head to Starbucks' Facebook account to see what it is. The account kept teasing that date and after Starbucks employees on Reddit reported that they had already received their PSL materials.

It's not clear what exactly will happen on that date, but here's what we can assume from the clues:

It's Got Something To Do With The Release

Whether or not the PSL will actually get released tomorrow remains to be seen, but what we do know for sure is that this Facebook announcement will come first. And we have a good feeling it will all make sense after we tune in to Facebook.