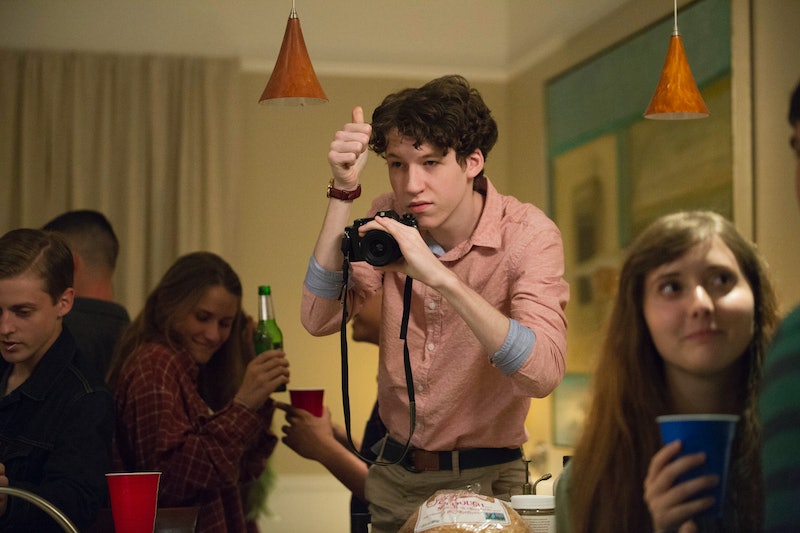 The first season of 13 Reasons Why was notable for the sheer scope of teenage trauma that it portrayed. The show pulled no punches capturing self-harm, depression, sexual assault, and many other dark aspects of teenage living. The Season 1 finale indicated that Season 2 could add a new topic to that list: gun violence. It won't be revealed until the season's premiere on May 18 whether 13 Reasons Why Season 2 has a school shooting, but the show has laid down a clear hint of who may end up pulling the trigger if there is one.

UPDATE: According to The Hollywood Reporter, Season 2 "focuses in part on a plot having to do with a thwarted school shooting." Netflix cancelled the show's premiere to be sensitive to the fact that a school shooting occurred in real life in Santa Fe, Texas the same day the season dropped on the streaming site. "Our hearts are with the victims of the Santa Fe High School shooting, and with all victims of gun violence. In light of today's tragedy, we are cancelling the 13 Reasons Why S2 premiere event tonight," Netflix said in a statement, per THR.

EARLIER: The finale of Season 1 featured one noticeable act of gun violence — Alex Standall turning a gun on himself and attempting suicide. However, those who haven't been keeping up with the series since watching Season 1 may have forgotten another important gun in the Season 1 finale — or rather, a variety of guns in one box that Tyler owns.

In the finale, Tyler not only explored an arsenal hidden in his bedroom — he also examined pictures of everyone who he felt had wronged him — removing Alex from the list after some consideration. Could Tyler be planning his own public response to his torment — opting for violence against others where Hannah Baker felt the only solution was to commit violence against herself?

While Tyler removed Alex from his makeshift museum of people who have hurt him, the faces of Bryce Walker and Courtney Crimson were still visible — hinting that Season 2 could feature some major character deaths at Tyler's hands. Showrunner Brian Yorker told Insider, "I think Tyler suffers — especially at the end of Season 1 — from some severe social isolation."

It's clear that Tyler blamed Bryce, Courtney, and others for his social isolation in the same way Hannah blamed them for the pain she went through. While not explicitly stating that Tyler's plotline in Season 2 would revolve around violence, Yorkey mentioned that his storyline ties into the national conversations about guns and school shootings.

While all signs point to Tyler pointing a gun on his fellow students, Yorkey suggests that Tyler's final decisions won't end as tragically as Hannah's. "[Tyler is] thinking about making a tragic choice to restore to some sense of control or power, and I think we'll see over the course of Season 2 that he continued to struggle with that but that hopefully there will be a community that is able to support him in a way that maybe there wasn't for Hannah."

Tyler's story could end up being a foil to Hannah's — showing that teenagers on the verge of making violent decisions can be helped by getting the support of others. It's a nice message, but it may not be accurate to the reality of school shootings.

13 Reasons Why found itself drawing controversy in its first season for its graphic depiction of Hannah Baker's suicide, and not initially offering resources for viewers who may be triggered by the show's heavy subject matter. In response, Season 2 will feature no suicides according to Yorkey, and the show has a new introduction encouraging viewers to seek help if they've been through similar traumas. While the show has answered to past controversies, there's a chance that a shooting plot could face a lot of the same critiques that the show faced after Season 1.

Premiering only a few months after the devastating Parkland shooting, in a year where there have been 21 school shootings as of May 11, 2018 according to CNN, it's more important than ever that depictions of gun violence on television are treated with care and accuracy. The reality of gun violence is that while bullying and social isolation can be connected to some examples of gun violence, the question of why people turn guns on their classmates is as complicated as the question of why people decide to take their own life. If 13 Reasons Why does decide to depict a school shooting, hopefully they learned their lesson from the criticism against Season 1, and do so in a responsible manner.