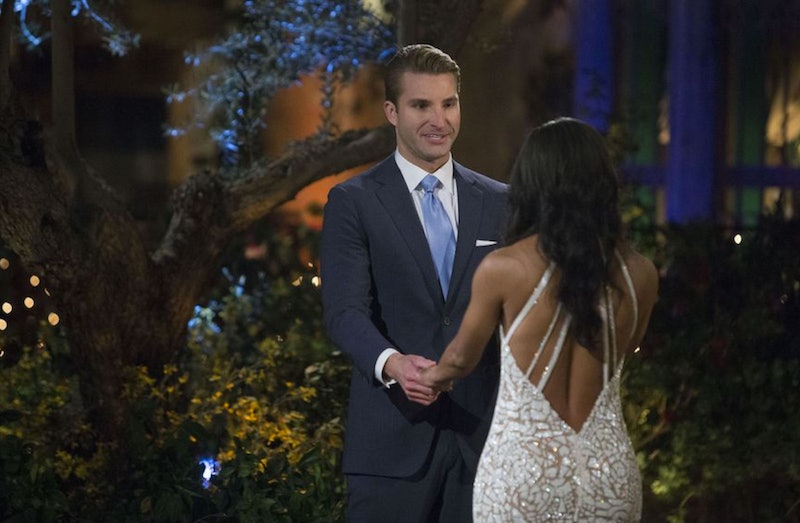 Paging Bachelor Nation’s resident Tickle Monster, there's a very important question he needs to answer. And that question: is Jonathan the Tickle Monster single after Bachelor In Paradise? On week three of Bachelor in Paradise Season 4, Jonathan Treece of The Bachelorette Season 13 joined the cast and hit it off with Christen Whitney and Jasmine Goode. Could either of these sparks still be flickering after Paradise? Granted, Christen and Jack Stone's connection seems to be more of a Thing than Christen and Jonathan's connection, and yeah, Jasmine and Jonathan's Thing didn't seem to be too serious of a Thing when Haley and Emily Ferguson had a date card, but there's still one whole episode left. AnyThing is possible.

As fellow Bustle writer Caitlin Gallagher observed, Jonathan and Jasmine’s social media behavior doesn’t seem like that of a present-day couple. For one thing, Jasmine tweeted, "'I don't see colors' haha love him @TickleJonBach." @TickleJonBach appears to be a fan account for Jonathan, not his real account. And, uh, tweeting at the wrong account would be a weird move if they were romantically linked? Same goes for Christen: Last week, she tweeted, "Guys. This was a serious moment@TickleJonBach is confident and he's fluent in sarcasm #respect#BachelorinParadise." There's that "Creepy TickleMonster" maybe-fan account again.

On to the next social media platform. Christen's Instagram account is locked, but Jasmine and Jonathan's accounts are open for all the world to see. And judging from their Instas, it looks like Jasmine and Jonathan probably didn't pursue something after the show wrapped, i.e., they haven’t posted any photos of each other. Yes, they could be dating and keeping their relationship under wraps so as not to spoil the outcome of the season, but that doesn’t seem to be Season 4’s style. (See: Amanda Stanton and Robby Hayes holding hands in public some months before the BiP finale even aired. Oh, also see: Taylor Nolan and Derek Peth’s engagement.) Keeping everything that happened on BiP plus their social media posts in mind, it's probably safe to assume that Tickle didn't end up with Christen or Jasmine.

Which brings us back to our original question: What's Tickle Monster's current relationship status? What's his post-BiP life all about? What information does the internet have for us? It's time to dive into his Instagram account and see if there are any clues about his love life.

He’s Been Going To The Beach With His Dog, Sheeba

In addition to hanging out by the ocean with his adorable pooch, Jonathan also encourages people to adopt a pet instead of buying. In one Insta post, he wrote, "When people ask me what kind of dog she is I joke she's a pound puppy people respond 'they are the best!'..it's so true!If you're in need of a pet I would encourage you to adopt, if you're looking to buy a pet...ill sell you a #Furby."

Gotta say, that is a huge plus for Tickle Monster. Also, how many Furbies does he have on hand?

Aw, what have we here? A trip to the ballpark with Ashely Iaconetti and future ex-couple Robby and Amanda? Before you think, "it's a double date," please consider Ashley I.'s Insta account. Nary a Ashely I. and Tickle Monster post to be found. It's (probably) not a double date.

He’s Gone Golfing With His Parents

Well, this pic of Tickle Monster hitting the links with his mom and dad sure is cute. Yay for family stuff.

Excuse me, an eight-mile paddle board race? How did their arms not fall off?

He Posted A Couple Of Pics With Bachelor Alum Angela Amezcua

Before Hurricane Irma touched down in Florida, Jonathan evacuated his home state and headed to South Carolina, where he hung out with Angela. Angela, as fans may recall, was on Nick Viall's season of The Bachelor, and it looks like she and Tickle Monster are pals. Before you get too excited, it's worth noting that there really isn't anything particularly lovey dovey about the photo captions though; it seems like they really are just friends. So uh, maybe it's just a platonic Bachelor Nation duo.

There really don't appear to be any Instagram posts about a significant other. Tickle Monster is either (a) in a relationship and being very private about it, or (b) he is not in a relationship at the moment. (Wow. What a pair of bold and ambitious hypotheses, right?) Whether he's in a relationship or not, it looks like he's been living it up post-BiP.

Hey, maybe something will happen on the BiP finale that will surprise Tickle Monster fans. And if he didn't find love on BiP? No big deal. There's plenty of tickling to do in the real world, too.