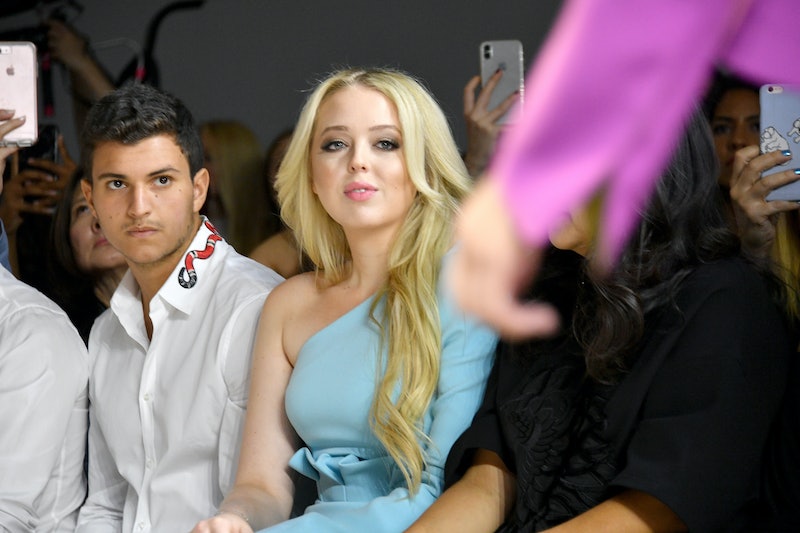 President Donald Trump has five children, and while the older ones — Donald Trump Jr., Ivanka Trump, and Eric Trump — are constant fixtures in the public eye, the younger two — Tiffany Trump and Barron Trump — live relatively free of attention. Still, one of them will be joining her father on a big upcoming trip: specifically, Trump's state visit to the U.K. If you were wondering whether Tiffany Trump is going to the U.K., you now have your affirmative answer, but she doesn't always join her father on his presidential travels.

New York Times White House reporter Maggie Haberman shared the news of Tiffany's travels on Twitter, saying that the state visit was "set to include not just the president’s children who work in the White House, but also his other adult children," implying that Tiffany would be joining in. A White House official also confirmed to Bustle that the trip would include Ivanka, Eric, Donald Jr., and Tiffany, plus Jared Kushner and Lara Trump, Ivanka and Eric's spouses, respectively.

While Tiffany has recently ruffled some feathers by taking international vacations that racked up sizable bills to be footed by the American taxpayer — at least $23,000 for a trip to Serbia and $20,000 for a trip to the Cannes Film Festival in France — she doesn't seem to travel with the presidential entourage as much as some of her half siblings.

A large part of the reason for Tiffany's absence from presidential events, of course, is the fact that she's currently a student at Georgetown law school. Some of those overseas trips, then, might not come at times when it's convenient for her to take breaks from school. For example, Ivanka and Jared accompanied Trump on his visit to the Vatican, according to NBC News, which took place in late March.

Despite her absence on most of her father's trips abroad, Tiffany often attends Trump family holiday gatherings, like their Thanksgiving celebration at Mar-A-Lago and some pre-Christmas fun in 2018. She has to split her holiday time, though, in order to spend some of it with her mother Marla Maples, with whom she is very close, according to The List.

During her time at Georgetown, though, Tiffany has attempted to stay as under the radar as possible, according to The Washington Post. While this doesn't always work, it does mean that it's so far been impossible to entirely trace her travels. She and her mother do sometimes post updates to Instagram that reveal where she's been, like when she went to London with Maples in the summer of 2018, or when she took an Easter trip to Mar-A-Lago in 2019. Her infrequent Instagram posts, however, haven't explicitly shown any international trips with the president.

Law school typically lasts three years, and Tiffany is currently in her second year, so she'll be done with her program in the fourth year of her father's presidency if she completes it along with the rest of her class. After that, maybe she'll have a bit more flexibility for international trips.