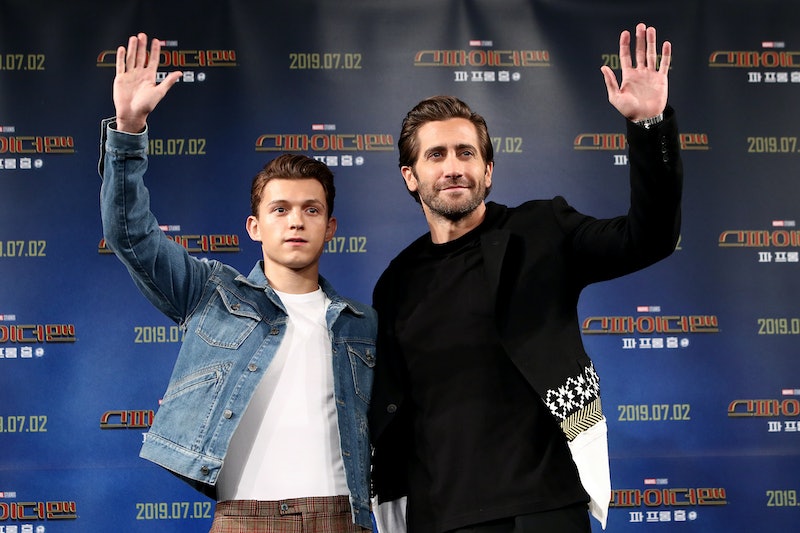 Marvel fans everywhere were shocked when Jake Gyllenhaal was announced as Quentin Beck a.k.a. Mysterio, but it turns out that the seeds for this role had been planted years ago. In a Entertainment Weekly cover story about his friendship with his Spider-Man costar, it was revealed that Gyllenhaal predicted his Far From Home role when he first met Tom Holland, long before the movie even began production.

Well, not exactly this particular role — but a costarring role, at least. According to the magazine, when the pair first met each other during a chance encounter at a restaurant, Gyllenhaal walked up to Holland to introduce himself — because even Oscar nominees are big fans of Spider-Man — and he told the younger actor that they would hopefully work together one day. Apparently, the feeling was mutual, as Holland recently revealed in a different EW interview that he's always wanted to work with the Donnie Darko star.

"If you look at any interview I’ve ever done prior to this movie and someone asked me, ‘Who would you work with if you could work with any actor?’ I would’ve said ‘Jake Gyllenhaal,'" he confessed. "And when I found out it was him, I was stoked, but also really nervous."

And while they say not to meet your heroes, for Holland, meeting and then working with Gyllenhaal was even better than he could have imagined. "It’s always a bit nerve-wracking when you meet someone you look up to," Holland said in the cover story. "I was just really grateful when I met [Jake] and I found out he’s a lovely guy and a great dude." The pair are now so close that Holland frequently asks Gyllenhaal for career advice, admitting to EW that, "He’s definitely someone I feel comfortable calling to say, 'Hey man, would you mind giving this script a read and letting me know what you think?'"

Despite the fact that Peter Parker (Holland) and Mysterio (Gyllenhaal) have a famously antagonistic relationship in the comic books — and a somewhat complicated one on the big screen — the two actors simply can't help but gush about one another in every interview they do. "He really, truly is a lovely soul," Gyllenhaal recently confessed during an interview with BBC's Radio 1. "He's good."

Speaking with Good Morning Britain earlier this month, the Oscar winner even admitted that their bond runs deeper than your average bromance. "It’s not even a bromance; it’s a straight romance," he said, which also helps explain why Gyllenhaal paid homage to Holland on Valentine's Day with a romantic video on Instagram.

Being so close with Holland also helped Gyllenhaal adjust to being a part of the Marvel Cinematic Universe — specifically, regarding Mysterio's elaborate, fishbowl-topped super suit. Though he admitted to Yahoo! that the "heavy" costume took some getting used to, Gyllenhaal soon came to love the suit almost as much as he loves his costar. "I didn't know how much I was gonna love it," he confessed in a recent interview. "I fell deeply in love with that suit. The other day we put it back on for some press stuff we were doing and, oh, the sweet feeling of tight spandex."

Whether it's the chance to slip back into his super villain spandex once more or the opportunity to pal around with Holland on the big screen again, it seems likely that if Mysterio is ever asked to return to the MCU, Gyllenhaal would jump at the opportunity.