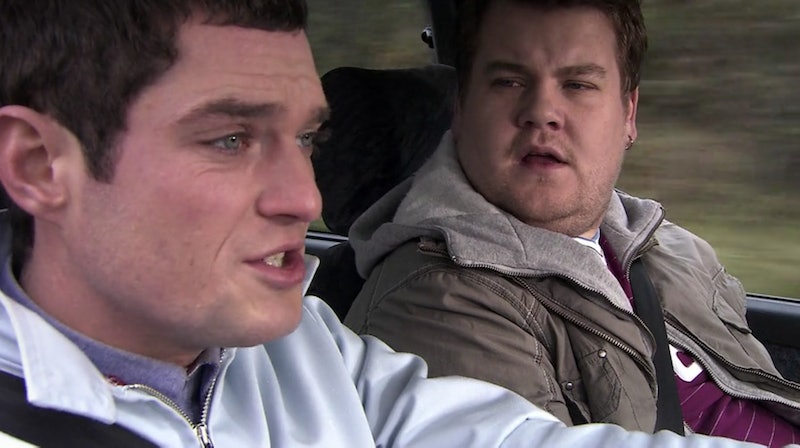 Fans of a bit of old nostalgia and top-notch British comedy will have been ecstatic when they heard that Gavin & Stacey was coming back to our screens. Sadly not a whole season, but a one-off Christmas special. I know, annoying, Christmas is forever away. However, like most Christmas specials, the show is being shot during this summer, and just recently James Corden dropped some hints about the Gavin & Stacey Christmas Special. Thank god. I need all I can get at this point.

Oh my days, it'ss been nine years since Gavin & Stacey had its finale. Nine effing years! Can you believe that? Ever since the show's end, fans have been dying for more — and it looks like the show's co-creator James Corden felt the same way too. Speaking to the Sunday Times, Corden said:

"We owed it to the ­characters. Let's see what they're doing. We wanted to see if there was something there. Once there was, my feeling was, life's too short."

I guess the main thing fans are dying to know is what the bloody hell is the special is going to be about? And will we ever find out what actually happened between Jason and Uncle Bryn on that mysterious fishing trip?

Corden, who wrote the show alongside Welsh legend Ruth Jones, dropped the news via his Twitter back in May.

Speaking to the Sunday Times, he did reveal that nobody would ever know what happened on the fishing trip but he also dropped a few tiny tidbits that are worth noting. During the interview, when asked if Brexit would feature, he it will, but it definitely won't be the focus: "We did talk about [Brexit]. But we just want the new show to be a nostalgic joy-bomb."

Mathew Horne, who plays Gavin, spoke to Radio 5 Live about the upcoming show. He kept fairly schtum but let people know that life is quite different for his character nine years later:

"There's very, very little I can give away — suffice to say he's a little bit tired. And he's a dad with an almost grown up child. I think the audience will be pleasantly surprised and warmed by what they see. I have every confidence people are going to really like it."

Speaking about the script, he shared his amazement at how Jones and Corden managed to collaborate so beautifully, despite trans-Atlantic issues:

"The script is really beautiful, it's really funny and it's really heartwarming. I think there'll be laughter and tears. Ruth and James have done an incredible job particularly considering they live in different countries."

Since the show ended, the cast have gone their separate ways. Corden moved stateside and gained a whole new legion of fans owing to his hit TV Show The Late Late Show With James Corden, which includes lit AF segments like Carpool Karaoke and Spill Your Guts or Fill Your Guts. Guys, he even hosted this year's Tony Awards. Meanwhile, Jones wrote and starred in Sky One's Stella and Matthew Horn and Joanna Page have appeared on both TV and film in the intervening years.

As there are six whole actual months before the show is going to air, only time will tell what clues will be dropped about the Christmas Special. Watch this space.