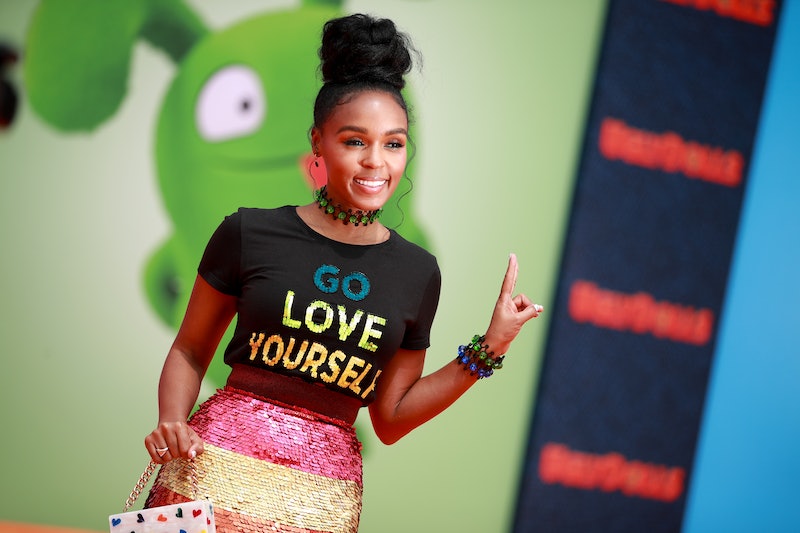 Janelle Monáe may be on Hollywood's it list, but she says she's still an outsider, a weirdo, an outcast. Despite several years of being told that she should forgo her dapper suits and androgynous silhouettes and forgo her eccentric approach to artistry and record more accessible music, the artist has continued to do things her way. She's difficult to categorize, which is exactly the point — the singer/actor/producer isn't looking to fit into any pre-cut molds. Instead, she hopes to help break them wide open for her fellow misfits, which is exactly why Monáe wanted to be a part of UglyDolls, the animated musical coming to theaters May 3.

"I'm a kid still," Monáe says, sitting at a desk in a room at the Beverly Hills Four Seasons. "I haven't grown up and I don't want to."

Today, she's wearing bold geometric earrings with a color-blocked suit and matching hairbands under a round black hat. She looks like a walking coloring book, filled out in hip bright Pantone hues — a look that is full-on Monáe as opposed to full-on Monet, if you'll allow the Clueless reference. Despite having performed a 90-minute set at Coachella less than 48 hours before, bringing her UglyDolls co-star Lizzo on stage for an epic and highly-Instagrammed twerk and booty bump session, Monáe is all mellow-energy and careful with her answers. Because while UglyDolls is essentially a movie for children created out of the popularity of a particular brand of plush toys, the story is one that Monae said she had a visceral reaction to when first reading the script.

The movie follows an UglyDoll named Moxy (voiced by Kelly Clarkson) who wants nothing more than to bring joy to a little girl in the Big World. But UglyDolls are sequestered in Uglyville, where they are unwitting outcasts kept out of Perfection, a nearby town full of perfect dolls preparing to present themselves to their individual chosen child. Monáe voices Mandy, a doll living in Perfection but hiding a secret — she wears glasses. Upon meeting Moxy and friends (voiced by Wanda Sykes, Gabriel Iglesias, Wang Leehom, and Pitbull), Mandy starts to see things more clearly — in the way that imperfections are actually quite interesting, and that pretty people such as Nick Jonas's snobby Lou can actually be very unattractive.

While she didn't have an UglyDolls movie growing up, seeing other black women like her on screen has been part of the reason why Monáe (who has also starred in Hidden Figures, Moonlight, andWelcome to Marwen, among other movies) wanted to get into acting in the first place.

"That's why I wanted to do this project in particular," she says. "I felt a lot of similarities with Mandy. I'm usually standing up to bullies and like Mandy, I'm on the side of the other. I know that there may be, just maybe, some other young black girls who can connect with Mandy and who may be wearing glasses and may be considered nerdy and imperfect. I know that they will look at this and see themselves and walk taller the next day because of this movie."

Monáe acknowledges the privilege she has in having a platform, but instead of making it sound like a sheer responsibility, she voices a desire to share the stage with others she sees as akin to her.

Although UglyDolls is geared toward a tot-through-preteen set, it easily serves as an effective allegory for what might be perceived as more adult subjects — subjects Monáe has taken on in her art in all forms, as well as in the press. She's playful with language at times, spending several years referring to herself as an android, but has been especially forthcoming about her intersecting identities as a queer black woman as of late, one who believes in freedom above all else.

"This is going to be an important film because it's going to have the minds and hearts of a lot of children and a lot of adults. And I think what we're saying is so of the times right now," Monáe says. "Even in our own country we're having to decide if we're going to be better allies to each other or if we're going to be abusers of power if we're going to stand on the side of the abuser of power or if we're gonna stand on the side of the marginalized and folks pushed to the margins of society because of how they look, who they love, what god they choose to serve, immigrants. I think that this film is a reflection of where we are in the world, and I'm drawn to giving folks an opportunity to have dialogue around important issues we need to be discussing. Because we literally depend on each other as a civilization."

Part of the appeal of UglyDolls for the artist were also her castmates: Lizzo, Charli XCX, and Bebe Rexha all voice perfect dolls known as SpyGirls who work for Lou, following Mandy and the UglyDolls in their efforts to make room for any doll to make it to be loved by a child in the Big World.

"We come from different walks of life and yet we can all see ourselves in this film and that's the beautiful thing about it," Monáe says, noting that she's a huge fan of her friend Lizzo, specifically. Memes of Monáe's support for Lizzo at Coachella have populated social media.

"I love her body positivity, I love how she is just representing for so many women around the world," Monae says. "She represents freedom and I love watching other free-ass motherf*ckers like Lizzo take over the world."

With powerhouse pop stars as part of the cast, UglyDolls is set to song, and duets like Clarkson and Monáe's "All Dolled Up" and "Unbreakable" are simultaneously adorable bops and empowering music mantras. Monáe says she's hoping people will enjoy the soundtrack as much as they do the story of the movie. "It was a great collaboration," she adds.

In this perhaps unlikely new project, Monáe will continue to spread that message of not just self-love and acceptance but celebration of the individual to a young audience, one that will surely be happy to see the person behind the character of Mandy is a purveyor of the same values.

"Beauty is in the eye of the beholder. I know that's super cliché but it's said for a reason," Monáe says. "I think it's the things that you do that make you beautiful. The people you help, the lives you change. Even the prettiest people can be ugly, deep down inside."