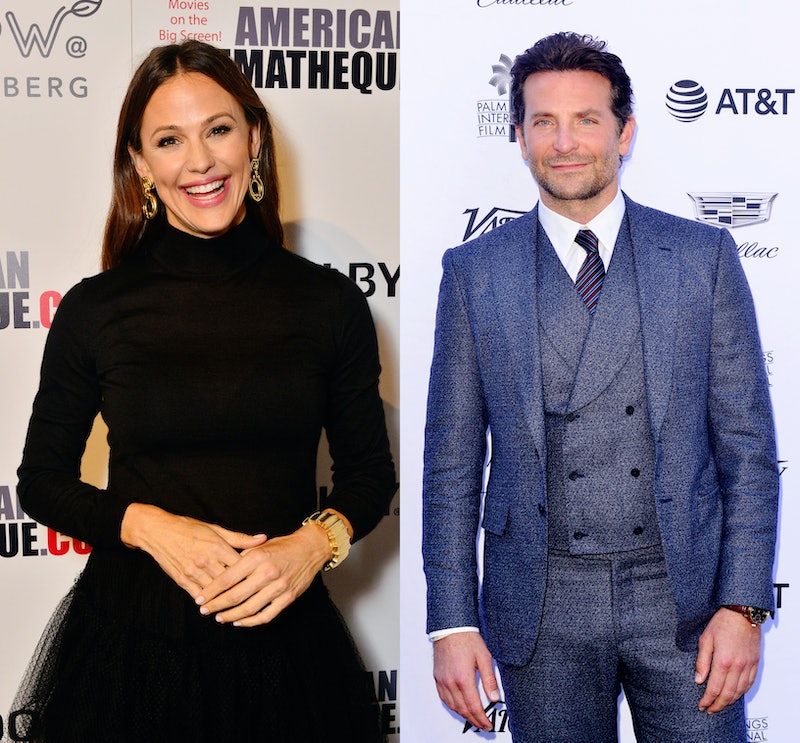 Fans of Sydney Bristow and Will Tippin, prepare to have your day made. In an Instagram post on Saturday, Jan. 5, Jennifer Garner wished Bradley Cooper good luck at the Golden Globes (and a happy birthday), while also teasing that she "taught him everything he knows." Basically, it's the sweet affirmation that the real-life friendship between the Alias stars is still going strong even though the show ended way back in 2006.

Garner and Cooper's friendship goes way back to their days on Alias where they played best friends Sydney and Will. Since then, they've traded in their spy credentials for major Hollywood roles and awards. Garner just recently wrapped the HBO miniseries Camping — her return to TV after years of starring in hit movies like Dallas Buyers Club, Peppermint, and Love, Simon. Meanwhile, Cooper is earning major accolades this year for not only his acting in A Star Is Born, but his directing of the film as well.

When the Golden Globes air on Sunday, Jan. 6, it could be a major night for Cooper, and Garner's made it clear that she's hoping her pal cleans up at the ceremony. Her Instagram post features a throwback photo from the set of Alias, along with the sweet caption: "taught him everything he knows. Happy Birthday, Bradley. Go get em tomorrow. We are all so proud of you. xxxx."

Go ahead and "aw," you know you want to, because Garner is definitely making you feels those sweet '00s vibes.

This is far from the first time that Garner has expressed her support of Cooper's career. In November, the 46-year-old actor gave a speech honoring Cooper at the American Cinematheque Awards that spoke to just how enduring their friendship has been through the years. As reported by Entertainment Tonight, Garner began her speech by telling the audience how she took her Alias co-star home for dinner when he first arrived in Hollywood. She continued,

"There is something about people who are the same in success and failure that makes us love them. Tells us, we know the very heart of them. I know the heart and stomach of Bradley Cooper. Bradley, what’s happening to you now is a pure joy to those who know you, especially to those of us who've known you from the start. It turns out you weren't just handsome all along. You were also a wonder, and you are welcome at my table anytime."

A Star Is Born is up for five awards at the Golden Globes, and there's an excellent chance that Cooper's film will earn him at least one trophy on Sunday night. No matter what happens at the Globes, though, it's clear that the actor/director has all of the support he could ever ask for from Garner. Even though it's been a while since these two last shared the screen, they're making sure Sydney and Will's friendship lives on through their very real BFF status.

And if Cooper does win, you can bet that Garner will be prouder than ever of her co-star — and maybe even taking a tiny bit of credit for his success. Because, hey, he did learn everything he knows from her, after all.