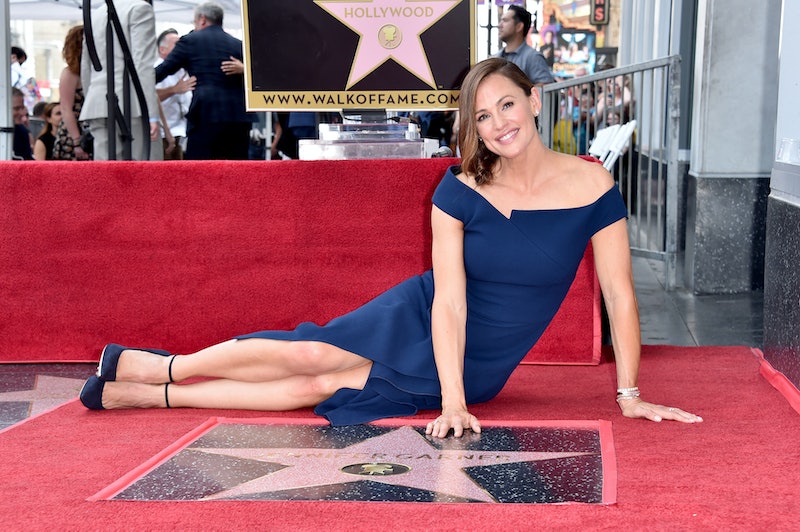 The beloved and luminous actor who has starred in great works such as 13 Going on 30, Juno, and Alias received a star on the Hollywood Walk of Fame on Monday, Aug. 20. And duh, Jennifer Garner’s Walk of Fame acceptance speech is all things charming, delightful, and goofy. But really, what else would you expect from the person who gave us that legendary Oscars meme? Or gifted us with that “What’s In My Bag” Instagram video where she found an… amethyst geode and approximately one thousand heart stickers in her backpack? Or named a chicken named Hennifer? Or shared a wonderfully loopy video she took post-dental work? Leave it to Garner to make a joke about her parents dropping their chewing gum on her star only to backtrack in the most endearing way.

After her pals and former co-stars Judy Greer, Steve Carell, and Bryan Cranston introduced the woman of the hour, Garner started off her speech by thanking them, adding, “I couldn’t ask for better friends than the three of you.” She also expressed her gratitude to everyone who gathered on Hollywood Blvd. that day, and then thanked everyone she’s worked with, everyone she’s worked for, her family, and her friends.

“A special shoutout to my niece and nephew who are missing their first days of school to be here today because in the Garner family, fame matters more than education. Obviously, that’s not true. They’re equal.”

Those weren’t the only jokes Garner had up her sleeve. She also asked her parents to not spit their gum out when they walk over her star, adding, “I was just kidding, Mom. I’m sorry, I know you would never do that.”

And yes, Garner did have a serious message for her parents, too. She said,

“I want you to remember … That it was your nonjudgmental, infinitely loving acceptance of me and whatever I hoped for myself that made this possible. Thank you for caring more about who my sisters and I are than what we do.”

Oh, you feel like your heart may just burst? Well, buckle up for her message to her three children, Samuel, Seraphina, and Violet. Garner said,

“For my children, when you walk over this star, I want you to remember first of all, that I love you. And that this is about hard work. And good luck. And not a whole lot else. You define me, not this wonderful spot in the pavement. Also, for the record, don’t spend too much time on Hollywood Blvd.”

And thanks to ET Canada, you can watch Garner's speech.

And hey, while you're here, why not check out Greer's sweet speech about her dear buddy, too? Specifically, the excerpt where she recounts the time on the 13 Going on 30 set when Garner bought Jamba Juice for everybody on set because a) it was the '00s, and b) Garner wanted Jamba Juice so she "just assumed everyone would want Jamba Juice." Oh, and she also taught Greer how to text while making that movie. The '00s strike again.