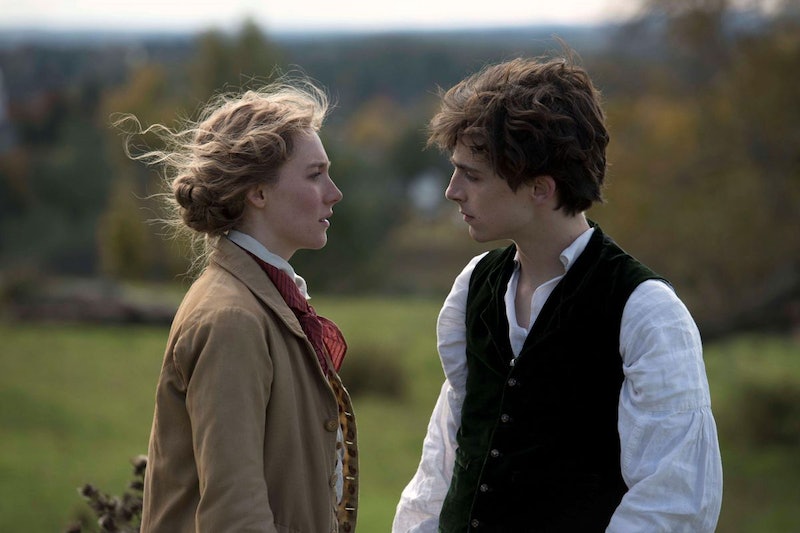 If you're still riding high on Greta Gerwig's Little Women film adaptation, you'll be pleased to learn that a new sequel to Louisa May Alcott's classic novel is coming. Out on June 2 and available for pre-order today, you can start reading Margaret Stohl and Melissa de la Cruz's Jo & Laurie right now, and get your first look at the fantastic cover, exclusively on Bustle, below.

Gerwig's new Little Women film has received a lot of attention since it premiered last month, most recently because the film and its director were snubbed at the Golden Globes and Oscars. Initially, however, spotlights on the film focused on the way the adaptation changed the ending of Alcott's novel — leaving Jo March ambiguously single at the final credits.

Whether or not you believe that Jo should have remained single at the end of Little Women, rather than marry Friedrich Bhaer, if you're a dedicated shipper of Jo March and Theodore Laurence, you're going to love Stohl and de la Cruz's novel. Picking up after Jo's publication of her novel — also called Little Women — Jo & Laurie centers on the titular writer and her childhood friend, as growing into new adulthood forces them to sort through their feelings for each other. Will Jo and Laurie finally end up together this time, or is it simply not mean to be? Find out when Margaret Stohl and Melissa de la Cruz's Jo & Laurie lands in stores on June 2.

Making his way back to the front door, where he’d told his carriage driver to wait "just in case," Laurie slipped out into the hot summer night. The carriage — parked over on the next block — was all in readiness to whisk him to Steinway Hall.

Laurie clambered inside, telling the driver to make haste. Down Broadway they clattered in the dark, the horses jolting around mud-holes and crowds of people shouting after them, up to the front door of Steinway Hall. Laurie argued his way inside — finally producing a receipt for the tickets in an amount so substantial that the doorman gave up and let him pass — and slipped down the dim aisle.

The stage was still empty, the lights up. The buzz in the crowd was so electric, Laurie knew it would be only a matter of moments until the principal attraction — Dickens himself — took the stage. Laurie searched the crowd for one head of slightly mussed curls in particular.

He could see her, just a glimpse, from rows away. How it was, he couldn’t have said, but he could always spy her. Crossing a field, all the way from the road. Walking a crowded street, from down the block. A particular gesture of her hand, the bend of her head. The lines of her he knew by heart. The colors he knew best.

The speed of her. The liveliness. The spirit.

He watched from the aisle. She was talking animatedly with an older man sitting to her right.

The seat to her left — the seat that Laurie had bought for himself — was still empty, as if she was waiting for him.

The others had long been given away, but this one seat she had kept.

Just as you would have for her.

Laurie could not say when it had happened, or why. There were no moments to pinpoint, no lines to quote. The truth of the thing had inched up around him a season at a time, finally bursting into blossom with the apple orchards adjoining their two houses. Laurie had grown up learning how to love her. It was the only lesson he was ever any good at, because Jo herself had taught him, even if she hadn’t known she was doing it.

She had made him.

And now, she was the thing that made him happy, made him whole, made him anything at all worth being.

He never wanted to be anywhere but by her side.

Jo didn’t see Laurie at first, so engrossed was she in her conversation with the older-looking man. Dressed a bit shabbily — his cuffs were frayed, and the hat in his lap had definitely seen better days—the fellow seemed to be saying something about the work he’d done in the war. Laurie heard the words "battlefield" and "photography."

As Laurie moved closer, he could see the flush of interest on Jo’s face — her eyes bright, her attention all focused on the photographer. And equally so, the smile of pleasure from this unknown man whose work Jo found so fascinating.

It was an intoxicating thing to be the object of Jo’s attention — as Laurie himself had been, once upon a time.

As I long to be again.

"And what brings you to Dickens this evening?" Jo was asking.

The man looked proud. "I’ll be taking his photograph later. It’s all been arranged."

"Christopher Columbus!" Jo exclaimed. "That means you’ll get to meet him!"

"That’s true." He nodded. "It is a bit exciting, I’ll give you that. Though I’m meant to not let on, professionally speaking."

Laurie could see the scheme forming behind Jo’s eyes.

In a moment she’d be inviting herself back-stage with this older photographer in an effort to meet Dickens in person. Or worse — the photographer would do so himself.

Laurie stepped forward, into Jo’s line of sight, and said, "Aren’t you the American authoress Josephine March?" He offered a sweeping bow. "And would you be saving that seat for anyone in particular?"

Heads swiveled from every direction. Heads, followed by whispers.

"You know I could never choose a society ball over you, Jo." He slipped into his seat and took Jo’s hand. The photographer noticed, giving Laurie the merest nod and Jo a look of regret. Laurie ignored him completely.

Jo didn’t notice because the audience was quieting. Dickens had just arrived.

On-stage, Dickens strode tall and elegant to a table at the center, where a book lay open. Waiting.

For a moment, Laurie felt certain the author must have seen him slipping into his seat near the stage — watched him sliding his hand into the hand of the young woman waiting there, her face rapt.

And so, too, he believed Dickens himself could surely see what Jo could not or would not: that they were meant to be.

Just then, the great man gave Laurie an imperceptible nod — or so he imagined — and began to read.

"My father’s family name being Pirrip, and my Christian name Philip, my infant tongue could make of both names nothing longer or more explicit than Pip. So I called myself Pip, and came to be called Pip...."

There was rapturous applause and Laurie chuckled, then leaned toward Jo and whispered, "So he does do voices! I told you. Well worth the price of the ticket."

"Stop, Teddy!" She touched her head to his, hesitated, then — "Was the ball a terrible bore?"

"You weren’t there, Jo." He shrugged. "Of course it was. You know I’d rather be here with you. More than anywhere."

She squeezed his fingers hard, her face shining with excitement. "I’m so glad," she said, and for the barest second, his heart leapt with hope.

Margaret Stohl and Melissa de la Cruz's Jo & Laurie is out on June 2 and is available for pre-order today.

More like this
We’ve Entered The Hot Boy Reader Era
By Samantha Leach
Netflix Shut Down 'Bridgerton' S3 Rumours About A “Very Dark” Storyline
By Bustle
Jessica Simpson On The Time She Was Pursued By A Backstreet Boy & An *NSYNC Member
By The Editors
Your Guide To Watching 'Everything Everywhere All At Once' In The UK
By El Hunt and Sophie McEvoy
Get Even More From Bustle — Sign Up For The Newsletter
From hair trends to relationship advice, our daily newsletter has everything you need to sound like a person who’s on TikTok, even if you aren’t.