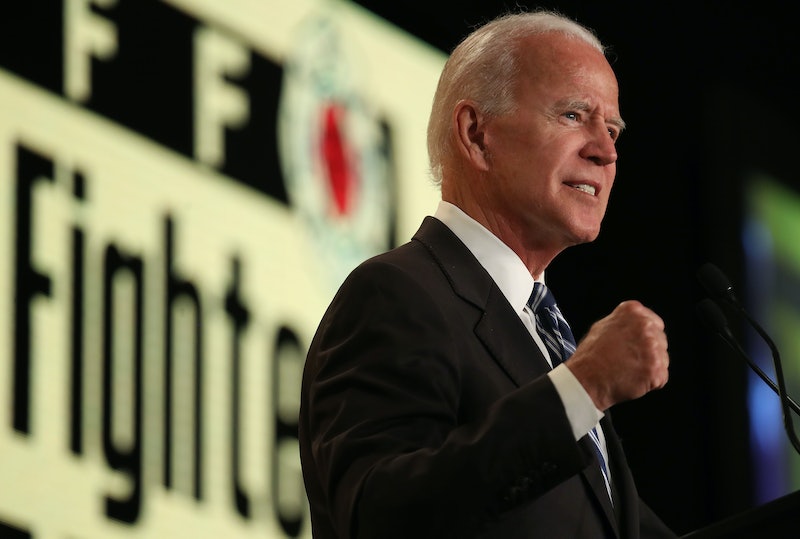 It's finally official: Joe Biden is running for president. The former vice president announced Thursday via a video on social media that he will seek the Democratic Party's nomination for president in 2020, putting an end to months of speculation about whether he'd join an exceedingly crowded field of candidates.

In his launch video, Biden says we are in a "battle for the soul of this nation," invoking President Donald Trump's now-infamous "both sides" response to the deadly Charlottesville protests.

"The core values of this nation, our standing in the world, our very democracy, everything that has made America America is at stake," he says in the video. "That’s why today I’m announcing my candidacy for president of the United States.”

This will be the third time Biden has run for president. While the former senator's 1988 and 2008 campaigns for the Democratic Party's nomination were unsuccessful, there's reason to believe this time will be different. For one, Biden has since served eight years as America's vice president, and did so under a president who remains popular to this day, giving him a gravitas that he lacked in his previous campaigns.

More to the point, Biden has consistently polled at the top of the pack in surveys of prospective Democratic voters in 2020. It's worth noting that at this point in the election cycle, primary polls aren't all that predictive, and Biden's high numbers could well be the result of his high name recognition relative to other declared and prospective candidates. Nevertheless, Biden enters the race in a better position than most of his 20 opponents.

The former vice president sat out the 2016 election, in which he'd been believed to be mulling jumping into the Democratic primary, after the death of his son Beau from brain cancer. Biden has been through quite a bit of personal tragedy while in public life; as a 2-year-old, Beau had survived a car accident that killed Biden's first wife, Neilia, and his 13-month-old daughter, Naomi, weeks before he was sworn into the Senate.

A native of Scranton, Pennsylvania, Biden has long positioned himself as a champion of middle-class workers. As speculation ramped up that Biden would join the 2020 primary field, however, his record on abortion and criminal justice, as well as his role chairing the Senate Judiciary Committee during the Anita Hill hearings, has come under fresh scrutiny.

Biden's campaign launch also follows a few weeks in which several women spoke out about times they said he made them uncomfortable or touched them in a way they felt was inappropriate. None of the women accused Biden of sexual misconduct, and Biden has maintained that he didn't touch anyone inappropriately. He addressed the women's concerns in a video posted to social media, saying that he recognized that social norms were changing and pledging to be "more mindful" of people's personal space going forward.

The former vice president is expected to kick off his campaign Monday in Pittsburgh with a speech on rebuilding America's middle class, followed by a swing through early voting states. That terrain will be littered with other Democrats trying to convince voters that they're the best (or most electable) choice for the job, and Biden is betting that his wide political network, the goodwill he built up as vice president, and a message focused squarely on the middle class will get him across the finish line.