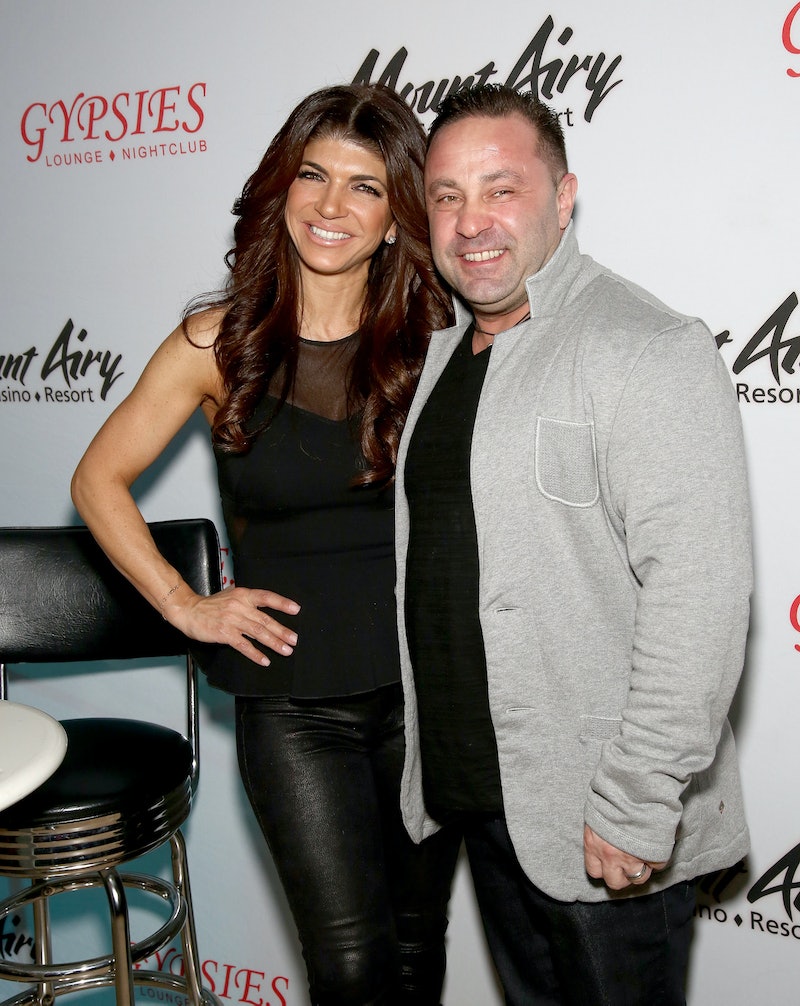 Last week, news broke that Real Housewives of New Jersey star Joe Giudice lost his deportation appeal. Now, Gia Giudice is circulating a petition to try stopping her father's deportation to Italy, as reported by Us Weekly. Joe and Teresa Giudice's oldest daughter wrote the Change.org petition to President Donald Trump on behalf of herself and her three sisters, Gabriella, Milania, and Audriana.

In October 2018, news first surfaced that Joe would be deported to Italy after completing his 41-month prison sentence. Back in 2014, both Joe and Teresa pleaded guilty to 41 counts of fraud. In 2015, Teresa served her own 11-month prison sentence. Joe began his in March 2016, and now his legal team is trying to stop the deportation.

Even though Joe's appeal was rejected, there's still one more chance for him to reunite with his family. On April 18, a source told E! News that the Board of Immigration Appeals ruled against Joe on April 6. The news reportedly took a few days to become public because the appeal decision was made through the mail. However, Joe's lawyer filed a petition for the federal court to review the appeal decision, according to E! News. And now, Gia is doing what she can to keep her father in the country with this petition.

After explaining that her father moved to the United States just one year after he was born, Gia began to plead her case. Gia wrote on the petition:

"He was found guilty of NON Violent offenses and served his time complying with all prison guidelines and procedures. My mother and father have fought tirelessly to pay back every single penny of restitution to court deemed they owe. They have made a mistake but rectified it through serving time and by finically satisfying all that was owed."

Then, Gia went on to say, "After completing his sentence he could've left the country and gone to Italy but he chose to stay in prison, [hire] additional counsel and make several more appeals to try to stay in the United States because he knows how much his family needs him."

Not only that, but Gia added, "He and my mother are willing to spend funds and additional time in an immigration prison for the chance he gets to hold his children again." Gia explained why getting deported to Italy would be very difficult for the father of four. She wrote, "He knows nothing of Italian culture, laws, societal norms, he has no immediate family and will not be able to secure work in this foreign land."

The petition got emotional when Gia listed some milestones events that would not be the same without their dad. She wrote,

"This would rob us of my father screaming from the stands at our graduations, meeting our future husbands for the first time, of walking us down the aisle, of being there when his grandchildren come into the world."

Gia pleaded, "Please use your voice, your power and your signature to help keep my family together."

Gia's little sister Milania shared the petition on her Instagram page. The 13-year-old scene-stealer also posted a throwback photo with her dad and a heartfelt Instagram caption. Milania included the hashtag "Free Joe Giudice" and even mentioned the president at the end of her April 19 post.

That wasn't the first time that Milania posted about her father's impending deportation on Instagram. In October 2018, she emphasized that she wasn't "done fighting" his deportation sentence.

These past few years have been very difficult for the Giudice family and on a very public scale. Teresa and Joe's daughters have been through so much. No one can blame them for trying to bring their father home.