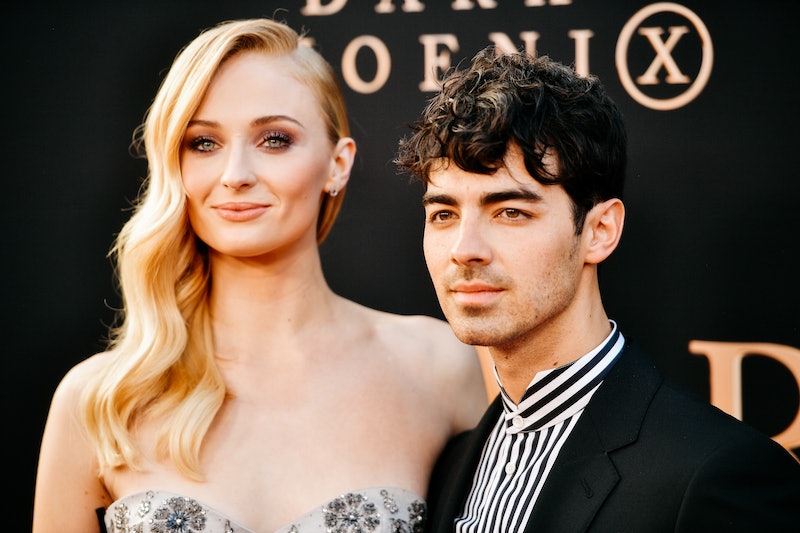 This celebrity couple can't help but praise one another. Joe Jonas celebrated Sophie Turner's Emmy nomination, which is also her first, in the best way on his Instagram Story on Tuesday. After the Television Academy announced that Turner scored a nom in the Outstanding Supporting Actress in a Drama Series category for her role as Sansa Stark in Game of Thrones, Jonas immediately took to social media to express his support.

Next to a professional photo of the newlyweds sitting on a couch, in which Turner's legs are draped over the singer's, Jonas gushed,

"Emmy nominated @SophieT I'm so incredibly proud of you"

He's truly the sweetest. Like Jonas, many fans believe Turner had an incredible final season as Sansa and definitely deserves an Emmy nom. Really, Turner's been showcasing her fabulous acting talents since day one as Sansa.

There's no denying the entire GoT cast is made up of great actors. Actually, three of Turner's costars were also nominated in the same category as her. Gwendoline Christie (Brienne of Tarth), Lena Headey (Cersei Lannister), and Turner's real-life BFF Maisie Williams (Arya Stark), earned recognition for their performances in the HBO drama, which concluded on May 19. Julia Garner from Ozark and Fiona Shaw from Fleabag share the category with the women of GoT.

It's no surprise that Jonas is raving about his wife and her major accomplishment. Not only is he a big GoT fan, but he loves Turner so deeply that he can't help but praise how amazing she is as an actor. When the drama officially concluded after eight seasons, the Jonas Brothers singer tweeted on May 20 next to a photo of himself looking sad,

"When you realize @GameOfThrones is over vibes.... Congratulations to everyone that worked on this incredible show! life changing television. I have you to thank for introducing me to the incredible @SophieT long live the QUEEN OF THE MF NORTH."

There's no denying Jonas adores Turner greatly and looks up to her as an actor. Like he revealed in the JoBros Amazon documentary, Chasing Happiness, "In finding myself, I was also able to find a partner. The impact of falling in love has made me want to be a better man, a better person, and ultimately made me a better brother."

Turner feels the same way about having Jonas in her life as her husband and forever partner. She said in Glamour UK's spring/summer 2019 issue,

"A lot of [my happiness now] is to do with being with a person I’ve fallen in love with, who loves me more than he loves himself, and who wants to see me find my own happiness. That was probably the biggest thing that pushed me to find who I am – and find my happiness in things other than acting."

Who else can't wait to see them attend the awards show together in September? They will probably steal the red carpet. And knowing Jonas, he'll make Turner's Emmy experience (whether she wins or not) all the more memorable.

More like this
'GoT' Star Emilia Clarke Says She "Just Can't" Watch 'House Of The Dragon'
By Brad Witter
15 Photos Of 'The Last Of Us' Star Pedro Pascal That Cement His Zaddy Status
By Radhika Menon
Britney Spears Shared The Real Reason She Shut Down Her Instagram Account
By Brad Witter
Twitter Is In Awe Of Taylor Swift’s “Lavender Haze” Music Video
By Jake Viswanath
Get Even More From Bustle — Sign Up For The Newsletter
From hair trends to relationship advice, our daily newsletter has everything you need to sound like a person who’s on TikTok, even if you aren’t.