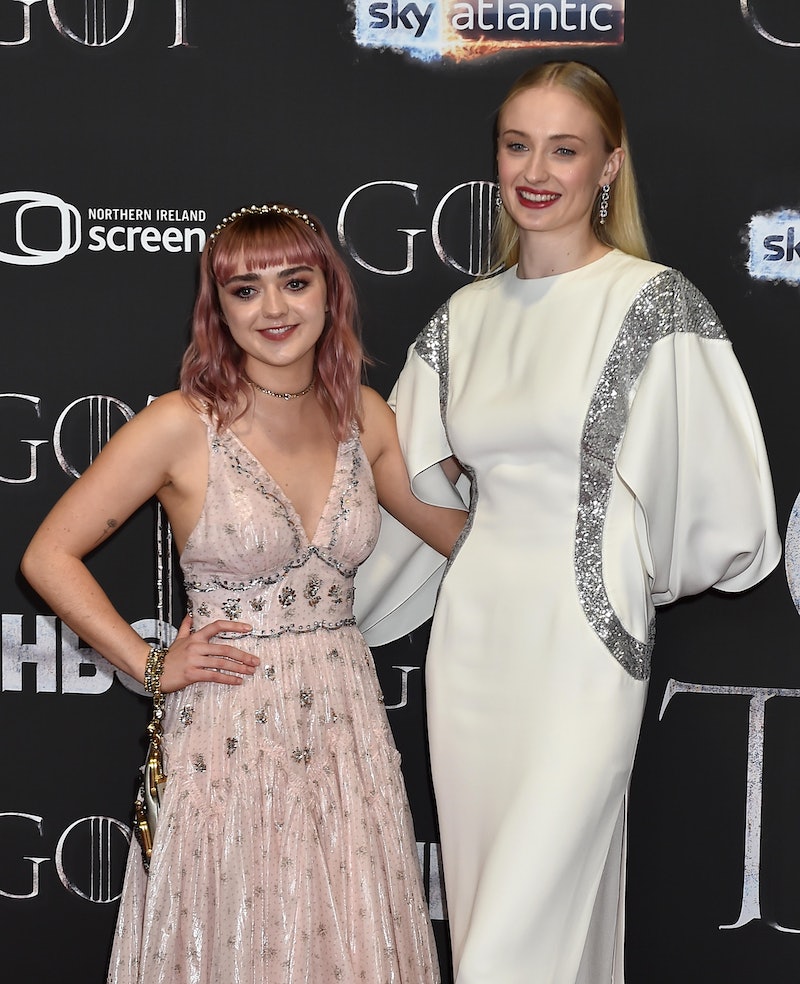 The Game of Thrones star may already be married, but that doesn't mean she can't celebrate even if Joe Jonas has officially put a wedding ring on her finger. Sophie Turner began her bachelorette party celebration on June 9 in Spain with an amazing group of friends, including her former GoT costar and real-life best friend, Maisie Williams.

As reported by Us Weekly on Tuesday, Turner traveled to Benidorm, Spain prior to her second wedding to Jonas. Yes, the Dark Phoenix star and the Jonas Brothers singer are reportedly having another marriage ceremony sometime in the near future. Apparently, and understandably, Turner wanted to have a pre-second wedding party with some of her closest friends. To be clear, the event has yet to be described by anyone in attendance as a "bachelorette party," but Us Weekly reported it as one.

There were also photos shared on Instagram by The Spanish Princess star Nadia Parkes and good friend Blair Noel Croce, who previously referred to Turner as her "soulmate."

Parkes uploaded two photos, one of which showed off Turner and her friends posing in front of a private jet. The second image featured the group inside the jet wearing sunglasses and holding up glasses of what appeared to be champagne. Parkes shared another image on her Instagram story of the group lounging outside in matching robes.

Croce also posted the photo of them in front of the airplane, along with a different picture of herself and two other friends, Kiki Grammatopoulos and Maddie Spalding, eating McDonald's. She captioned the Instagram, "We can't have nice things. The entire plane spilled their McDonald’s & drinks on take off. Bless that flight attendant's heart."

There's nothing quite like eating McDonald's on a private jet, or so one can imagine. Leave it to Turner, Williams, and everyone else to enjoy fast food on a fancy plane during a bachelorette party.

As for William's appearance, it only makes sense for her to be in attendance. She and Turner are true BFFs. Williams is even one of Turner's maids of honor. At the April premiere for the final season of GoT, Turner revealed the exciting wedding detail to Entertainment Tonight. After finding out Williams told ET she didn't know what to wear on the special day, Turner admitted,

At the time, Turner didn't unveil her second maid of honor's identity. In January 2018, Williams only opened up about being a bridesmaid in Turner's wedding to Jonas. She told RadioTimes.com about whether or not she'd take on a bridesmaid role, "I've already got it." Williams added about wedding planning, "We're waiting until this season's done until we get into any of that but I think she's already let her little heart wander and imagine."

It's unclear exactly when Turner and Jonas' supposed second wedding (they first said "I do" in Las Vegas in May) will take place, but it will no doubt be an epic celebration. The actor and singer definitely know how to have fun, as proven in the photos from Turner's bachelorette party.