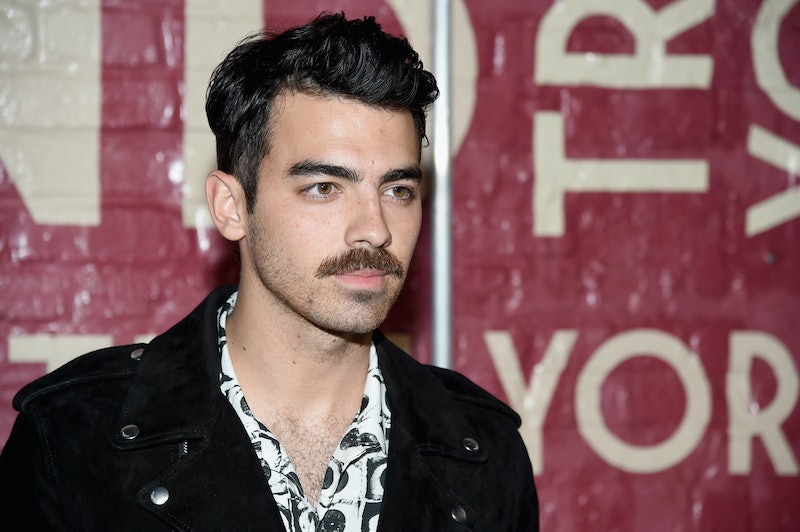 The cast of Game of Thrones, who have completed filming their show, are basically walking spoilers at this point. As Joe Jonas' Game of Thrones comments prove, though, it can be just as for on their partners. Well, kind of. Jonas got engaged to actor Sophie Turner in October 2017, and though she spent the next 10 months shooting GoT Season 8, he doesn't know anything about it. In fact, he doesn't want to — though the singer would have liked to be a part of it. If the HBO series had asked.

Variety caught up with Jonas at an event in Beverly Hills, and he spilled the beans on what it's been like to be engaged to a Game of Thrones star. Spoiler alert: He knows about as much as Jon Snow.

"I would have done [the show] in a heartbeat, but unfortunately, it’s not going to happen,” Jonas lamented, "That would have been amazing. I would have loved it.” Still, he said, he "can’t wait for it to come back" sometime in 2019.

Since Jonas never did end up on the show, does that mean his fiancée told him spoilers as an apology gift? Definitely not. "I don’t want to know any spoilers,” Jonas insisted to Variety, adding:

“Sophie won’t tell me and she knows if she told me I would be so heartbroken because I’m such a big fan of the show. I’d be pissed.”

This echoed a similar statement Jonas made in January of this year. "I wish I could say anything [about the show] but the truth is, [Sophie] doesn't give me spoilers," The Daily Mail reported. At the time, Turner was still filming, and Jonas explained that he felt a little torn about it all:

"So I kind of respect [that] because I'm a fan of the show and I'm a big nerd at heart, so if I was told how things were gonna turn out, I probably would have been disappointed because we have to wait so long for the next season."

A self-described nerd afraid of being disappointed? That's a Game of Thrones fan for sure. Fortunately, there's other TV the couple can enjoy together. Jonas also told Variety that Turner "got him hooked" on Keeping Up With The Kardashians. All of it:

“She’s obsessed with [KWUTK]. She’s been watching it from the beginning. The celebrity boxing match was the best.”

The episode he's referencing is from 2009, so that "from the beginning" thing is no joke.

So, bottom line here: If you even encounter Jonas and Turner in the wild, it's best to ask them about Keeping Up With The Kardashians or Peaky Blinders instead of Game of Thrones. Unless it's old episodes of Game of Thrones. Then they'll both probably be game.