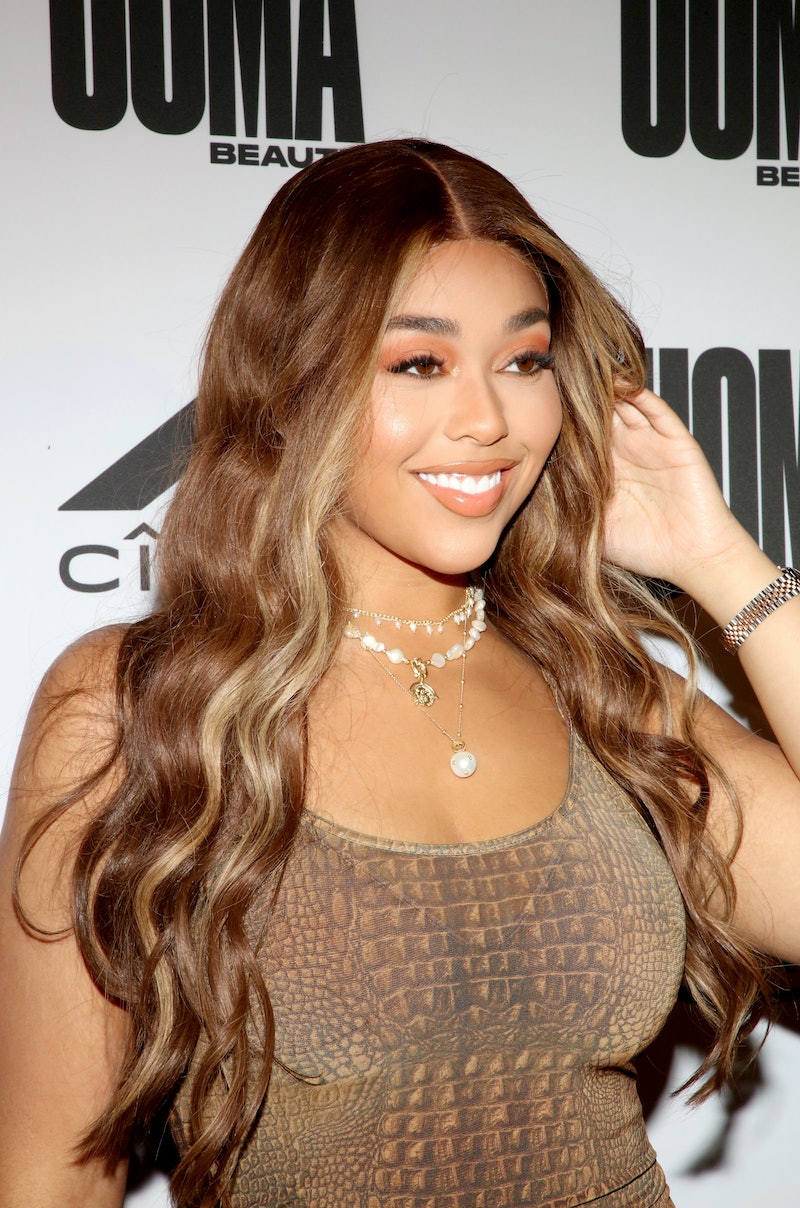 Months have passed since the Khloe Kardashian, Tristan Thompson, and Jordyn Woods scandal, but somehow, the drama lives on. Now, Jordyn Woods' new tattoo has people thinking that she's shading not just Kardashian and Thompson but former best friend Kylie Jenner as well. Obviously, Woods has made no comment about the tattoo's meaning, but the inspirational quote certainly seems like it could be in reference to the incident.

Woods made a public appearance during an event for beauty brand Uoma Beauty. She walked the carpet at the event wearing a fitted, crocodile print body-con dress, gold strappy sandals, and layered gold and pearl jewelry. While her style was on point, the new tattoo that takes up her entire forearm, from wrist to elbow, is what caught people's attention.

According to Us Weekly, Woods' new tattoo was done about a week ago by her brother at his tattoo studio. While fans did get to see a sneak peek of the new ink on the model's Instagram account, the words along her arm weren't quite legible. With her appearance at the Uoma Summer House Party, fans finally know that Woods' tattoo reads, "What's meant for me will never miss me," in delicate cursive script.

In photos from the Uoma Beauty party, you can clearly make out the tattoo, but the font is incredibly small. Us Weekly reports that the ink is a quote from Al-Shafi‘i, a Muslim Imam, writer, and theologian.

On Aug, 13, Woods showcased the tattoo again at the premiere of 47 Meters Down. The ink takes up a large portion of her outer forearm but is still subtle thanks to the tiny script.

While the quote is clearly inspirational and could apply to many different moments in Woods' life, the most likely option may be related to the alleged cheating scandal and her relationship with Kylie Jenner.

If you don't remember, Woods was accused of allegedly hooking up with Khloe Kardashian's boyfriend and father of her daughter True. The incident became public fodder and included Jenner due to her close friendship with Woods (the model even lived with Jenner at the time). Needless to say, ish hit the fan.

Woods and the Kardashian and Jenner family are allegedly no longer in contact, and according to an interview with Jada Pinkett Smith on Red Table Talk, Woods said that she and her family received death threats following the allegations breaking. If anyone needs a reminder that the universe works out in your favor, it's Woods.

While yes, the new ink could certainly be a reference to Jenner and the scandal, the tattoo is certainly not shade toward the family. Whether you believe Woods' explanation on Red Table Talk that the incident was innocent or are on Team KarJenner, an inspirational quote doesn't seem like shade so much as a reminder for Woods herself of the seeming difficulties of the last few months.

Whether or not the Jordyn Woods' tattoo is actually about Jenner or Kardashian, the model seems to be doing just fine. With a new collection with BooHoo, a cover of Cosmopolitan UK, and work with brands like Uoma, Woods appears to be moving right along.