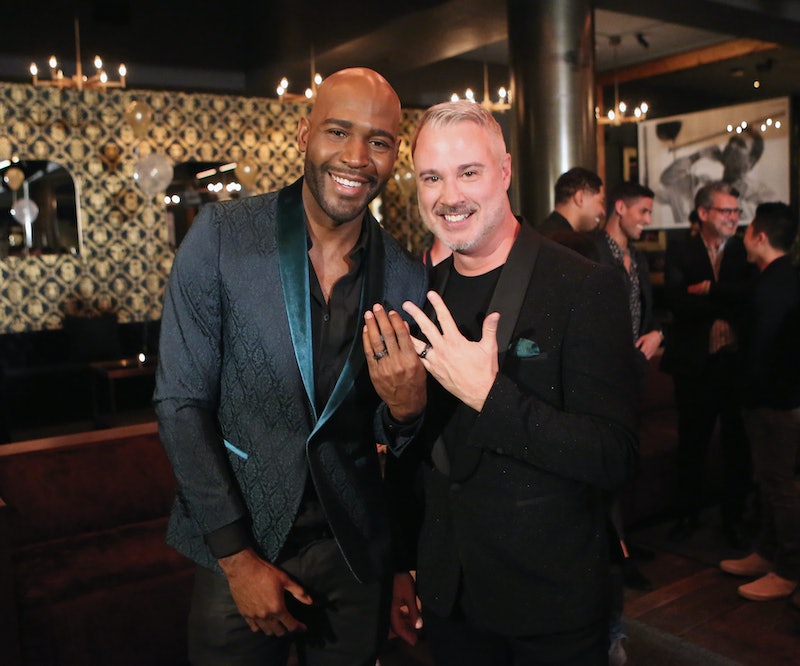 On May 9, in front of his family, friends, and all of the Fab Five, Queer Eye's Karamo Brown got engaged to Ian Jordan, a director and his long-time boyfriend. According to People, Brown initially told Jordan that they'd be celebrating his birthday, but when the time came for Jordan to open presents, Brown surprised his partner of eight years by getting down on one knee and proposing. Can you believe?

Entertainment Tonight was there to capture the big moment on camera, and their video opens with Brown's son Jason telling Jordan, "We have one more gift for you." At this point, Brown's not in the shot, but then Jason asks Jordan, "Can you just turn around?" — and when he did, Brown was down on one knee.

Brown went all out for the proposal, which also included a sweet video for Jordan, and an emotional speech from Jason, People reported. "You are the funniest man I know, the kindest man, my biggest cheerleader," Brown told Jordan, as per ET.

"You made me feel like I could do anything. I hope we can conquer the world together for the rest of our lives," he said with tears streaming down his cheeks. "Ian Lamont Jordan, will you marry me?” Great, now we're all crying. Oh, and obviously, Jordan said "yes!"

Later that night, the happy couple — wearing two totally different suits that perfectly complimented one another — posed for a photo with their David Yurman engagement rings. On May 10, Brown posted the picture on Instagram. "Last night, in front of family & friends, I asked my best friend and the love of my life, 'will you marry me?'" Brown captioned the photo. "He said YESSS!!!! I’m engaged! Showing off our beautiful @davidyurmanmen rings. #LoveWins @theianjordan."

Brown and Jordan have been together for eight years, and have both made careers in television. Most recently, as per IMDb, Jordan served as an assistant director for shows like Instant Mom, The Suit Life on Deck, and The Suite Life of Zack and Cody. He's also worked on a handful of other well-known kids' shows, like Zoey 101, Drake & Josh, and Spongebob Squarepants.

Brown, of course, is the culture expert on Netflix's Queer Eye reboot, and his co-hosts on the show — Antoni Porowski, Tan France, Bobby Berk, and Jonathan Van Ness — have all shared in the excitement of Brown's engagement with sweet messages on social media.

"COULDN'T BE HAPPIER FOR YOU BOTH!" France commented on Brown's announcement photo. "Love you both so much!" Berk wrote. Porowski responded with eight heart emojis, and Van Ness captured the proposal on his Instagram story. "Fully crying," Van Ness says in the video. "[Brown] produced this so well."

The newly-engaged couple have long-shared their love for one another via social media, and Jordan regularly reps his partner's hit show on Instagram. Brown recently dedicated a post to Jordan for his birthday on May 8, and shared an amazing "glamour shots" photo that will make fans love them even more.

"Happy birthday to the love of my life @theianjordan!" Brown captioned the picture, in which he and Jordan are posing in front of a gaudy, paint-splashed background. "I love you because of your heart, your humor but mostly because you don’t mind serving #GlamourShots realness w/ me anytime I ask. I pray today and this year brings you everything your heart desires. #HBD #40ish #TurnUp."

Good thing Brown put a ring on it, because anyone who's willing to prom-style pose for glamour shots like that is definitely a keeper. Congratulations to Brown and Jordan! May you continue to serve realness for the rest of your days.