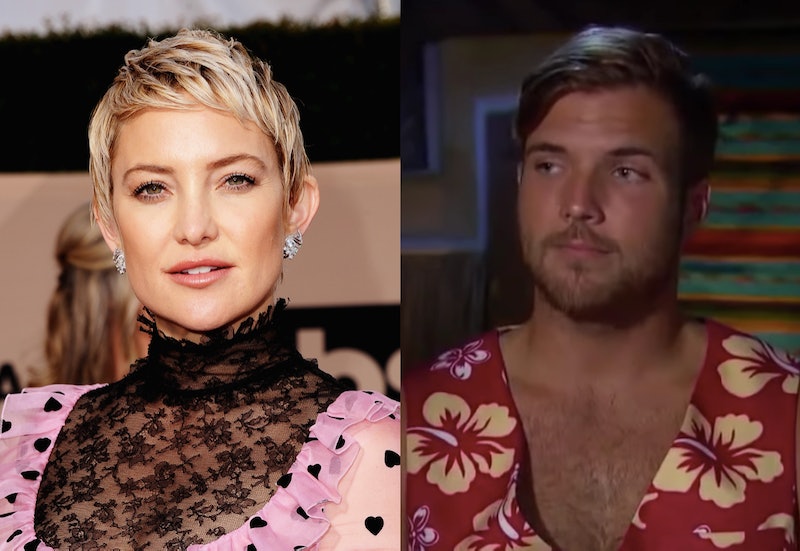 One of the biggest breakout stars from Becca Kufrin's season of the The Bachelorette was Jordan Kimball, and the male model now has a new celebrity fan — or more accurately, a celebrity's kid as a fan. Kate Hudson's son Ryder Robinson wants to be like Jordan, and he has the reality star's seal of approval.

Let's rewind: On Sunday, Hudson posted a video of her son talking about his future career prospects on her Instagram Story. "If I can't get an acting job when I'm older, I'm just going to follow in my idol Jordan Kimball's footsteps and become a male model," Ryder said. Hudson asked what that would look like, and her son imitated one of Jordan's famous modeling looks. Hudson captioned the photo, "look like he wants to act or be Jordan Kimball."

Of course, the video wasn't the end of Ryder's joke. Hudson also posted a photo of her son posing and making a silly face, captioning it, "he just can't help himself. #jokester." Never one to be afraid to poke fun at himself, Jordan supported Ryder's modeling aspirations by reposting the video to his own Instagram Story. While Jordan didn't comment on the video, it's clear he thought the post was funny by sharing it.

Ryder's impression is pretty spot-on, and Jordan seemed flattered by the comparison. When he's not finding new celeb fans, the reality star has a lot going on these days. In addition to sharing the video from Hudson on his IG Story, he also took a moment to talk about the travel coming up in his schedule.

"What's up guys, life's pretty good right now," he said. "Headed to California for four days tomorrow, then back to Florida, Canada, and then we're going to do Texas, Connecticut. Where should I go you guys, I'm having a blast?"

The trip comes at the end of a whirlwind couple of months for the Bachelor in Paradise star. Last week, Jordan joined former costar Joe Amabile on Dancing With the Stars. In honor of trio night, Grocery Store Joe and coach Jenna Johnson invited Jordan to perform a Magic Mike type number to Right Said Fred’s “I’m Too Sexy.”

The appearance came just weeks after Jordan's high-profile split from ex Jenna Cooper. As fans recall, the couple got engaged during the Bachelor in Paradise finale, but split less than 24 hours later amid controversy when supposed text screenshots surfaced. A man claimed that Jenna sent him the messages while she was still engaged to Jordan. (Jenna has repeatedly denied sending the texts in question, and she remains intent on clearing her name.)

In a statement on Instagram on Sept. 12, Jordan addressed the split, writing:

"I deal with unreasonable circumstances reasonably and have come to terms with a decision to remove myself from the relationship, it breaks my heart to think, feel and fall for this. It’s dropped me. Fumbling emotions and being understanding is not easy. I’ll be taking time to pursue my inner peace and she will always have me to talk to, if you’ve reached out to me, allow me time. Thank you to those that have."

A month later, Jordan seems to be recovering from the breakup, and has continued his modeling career since wrapping BiP. In early October, he hosted an event for Supermodels Unlimited Magazine, and he often posts photos from photoshoots to Instagram. He continues to be one of the most attention-grabbing stars to come out of the franchise in recent years, and it's clear he still has celebrity fans. He might even be inspiring a few of their future careers.