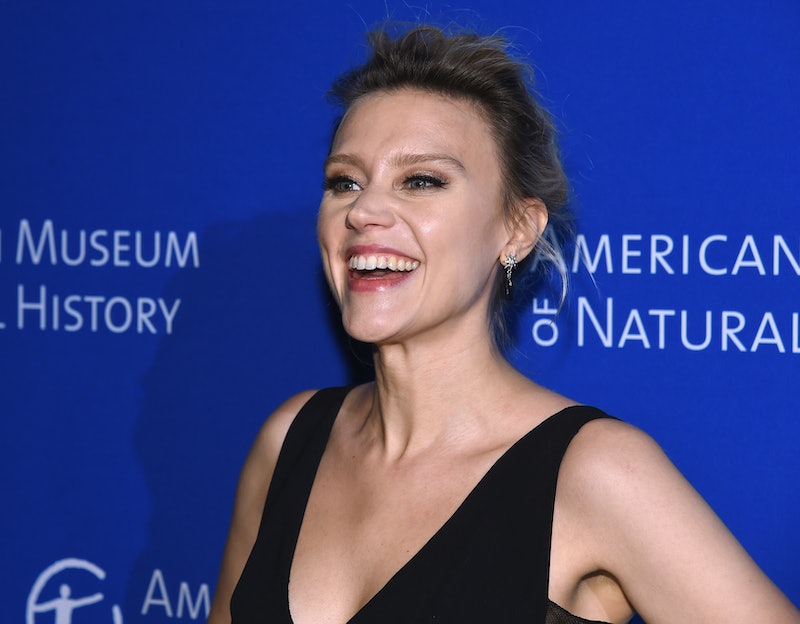 Hulu's long-anticipated Elizabeth Holmes series is finally happening, and they could not have picked a better actress to don the Theranos founder's black turtleneck. On Wednesday, May 1, Hulu announced that Kate McKinnon will play Elizabeth Holmes in The Dropout, an adaptation of the podcast of the same name that chronicled Holmes' rise to fame as the inventor of an allegedly fraudulent blood testing company, Theranos, and the criminal charges she is currently facing.

Reports of McKinnon's casting originally surfaced in early April, though details about the show were scarce at the time. However, in a press release confirming the news obtained by Bustle, Hulu revealed that the show will be a dramatic limited series, showing fans a side of the Saturday Night Live superstar that they have never seen before. "The series will explore what caused the world’s youngest self-made female billionaire, once heralded as 'the next Steve Jobs,' to lose everything in the blink of an eye," the press release explains, adding that McKinnon will executive produce The Dropout, along with the podcast's host, ABC New correspondent, Rebecca Jarvis.

Holmes' story was recently the subject of HBO's documentary, The Inventor, which ended with Theranos falling apart and Holmes and her business partner, former Theranos COO Ramesh "Sunny" Balwani were being investigated. Holmes was later indicted on two counts of conspiracy to commit wire fraud and nine counts of wire fraud in June of 2018, according to the United States Department of Justice website. She pleaded not guilty and is currently out on bail and awaiting trial.

McKinnon's version of Holmes is far from the only adaptation of the Theranos story headed to the screen in the near future. In March, it was announced that Jennifer Lawrence will play the disgraced Silicon Valley inventor in Adam McKay's Bad Blood, which is based on the book by John Carreyrou. Still, if Hulu's most recent true crime offering, The Act, is any indication, The Dropout should allow McKinnon to indulge her darker, more dramatic side, and we can't wait to see her version of the Theranos story come to life.

While the confirmation of McKinnon as Holmes is, of course, incredibly exciting, The Dropout isn't the only one of Hulu's new TV series that will become your newest obsessions. During their 2019 Upfront Presentation on May 1, the streaming service announced adaptations of Marvel comics' Ghost Rider and Helstrom, as well as a "food-focused" shows created in partnership with Vox Studios, chef David Chang, and Chrissy Teigen. The model-turned-cookbook author also signed an original programming deal with Hulu, and while no details about the partnership have been revealed, Teigen's love of cooking, comedy and reality TV bodes well for her upcoming projects.

Meanwhile, Big Little Lies fans will be delighted by the announcement that Hulu will adapt another of Liane Moriarty's novels, Nine Perfect Strangers, with Nicole Kidman in the starring role. "The series takes place at a boutique health-and-wellness resort that promises healing and transformation as nine stressed city dwellers try to get on a path to a better way of living," according to Hulu's press release. "Watching over them during this ten-day retreat is the resort's director Masha (played by Kidman), a woman on a mission to reinvigorate their tired minds and bodies. However, these nine 'perfect' strangers have no idea what is about to hit them." Sounds like it will definitely fill the void that will undoubtedly be left in our lives after Season 2 of Big Little Lies ends.

Between The Dropout, Nine Perfect Strangers and whatever Chrissy Teigen is currently cooking up, it seems as if Hulu has truly tapped into the Internet's biggest guilty pleasures and obsessions and turned them into very exciting, extremely watchable content.