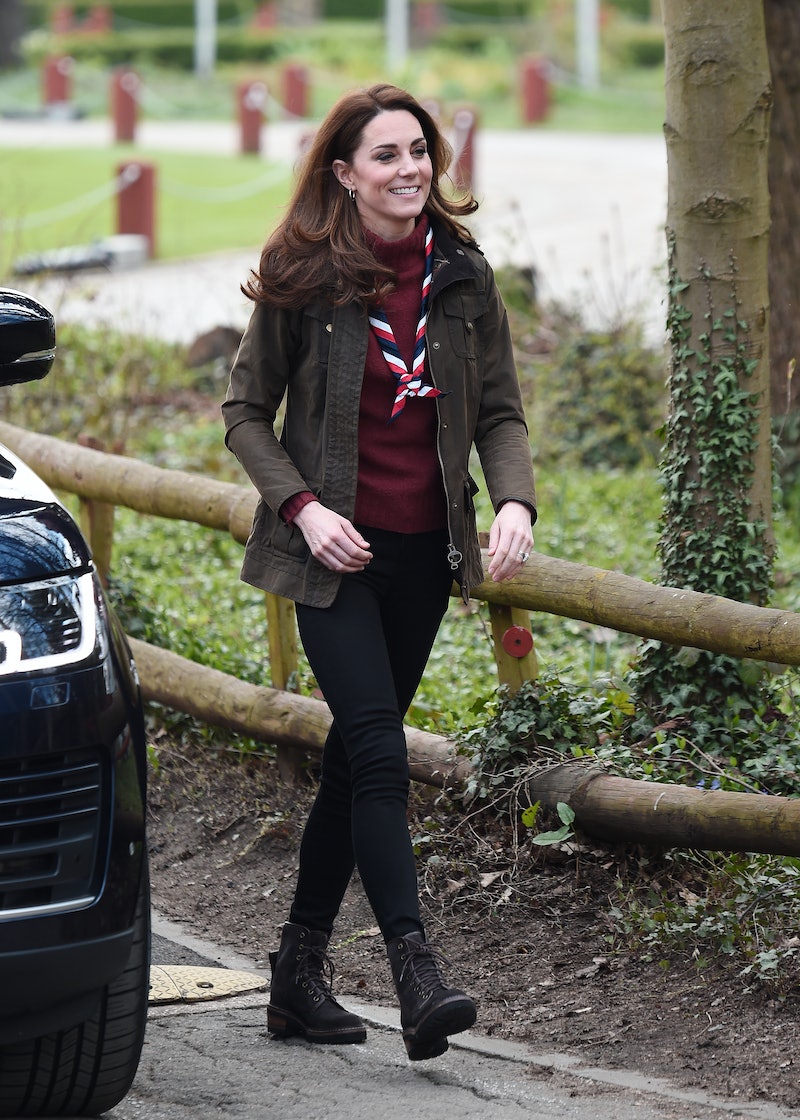 The women of the royal family aren't much like the average person. Sure, they probably binge watch Netflix some nights and appreciate a good glass of wine, but when it comes to their sartorial choices, the Duchesses of Cambridge and Sussex have the fashion world at their fingers. However, Kate Middleton wore all repeat pieces at an event at London's Gillwell Park on March 28, and her look proves that sometimes a great outfit is worthy of a repeat (even if you do have Givenchy on speed dial).

On Thursday, Middleton visited the Scouts headquarters at Gillwell Park. The organization is essentially the UK's version of the US's Boy Scouts and Girl Scouts according to Harper's Bazaar, and the event may have been just a little extra special for the Duchess since, according to People, she herself was in the organization when she was younger.

Clearly, she knew that her classically dressed-up style wouldn't work for the outing, and her outfit choice was one of her most casual. However, that's not what makes it notable. After all, royal style fans have seen the Duchess in jeans before. The important thing about her outfit at Gillwell Park is that every single piece was actually a rewear for Middleton.

According to website What Kate Wore, the Duchess of Cambridge is sporting a J. Crew sweater, Chloe boots, a Barbour Defence Jacket, and a pair of black skinny jeans. Only the jeans Middleton is wearing have yet to be identified, but the website suggested that they could be Zara jeans she has worn in the past.

If you think the look seems familiar, there's a good reason. Most of the pieces Middleton is wearing, she also wore to another outdoor appearance back in January 2019. At the event for King Henry's Walk Community Garden, Middleton wore the exact same J. Crew sweater and Chloe boots she wore on Thursday.

While Middleton chose to pair the sweater and boots with a different pair of jeans and jacket this time, the looks are incredibly similar.

Clearly, Middleton's boots and sweater are repeats from the previous event at the garden, but she's worn her Barbour jacket in the past as well. According to What Kate Wore, Middleton appears to have last worn the Defence jacket back in 2017 when she helped to celebrate the Royal Horticultural Society's 10th Anniversary.

As for the denim, since it has yet to be identified, royal style fans can only guess. However, at the Horticultural Society event in 2017 when she wore the Barbour jacket, she paired it with black skinny jeans that certainly look similar. As for the theory that they could be Zara, that's plausible as well. Middleton has long shown a preference for jeans from the more affordable company wearing them on several different occasions.

While Middleton may certainly be able to snag the finest fashions from luxury designers and even have old outfits repurposed, sometimes there's nothing like a good rewear. Maybe, just maybe, royals are more like you than you though.