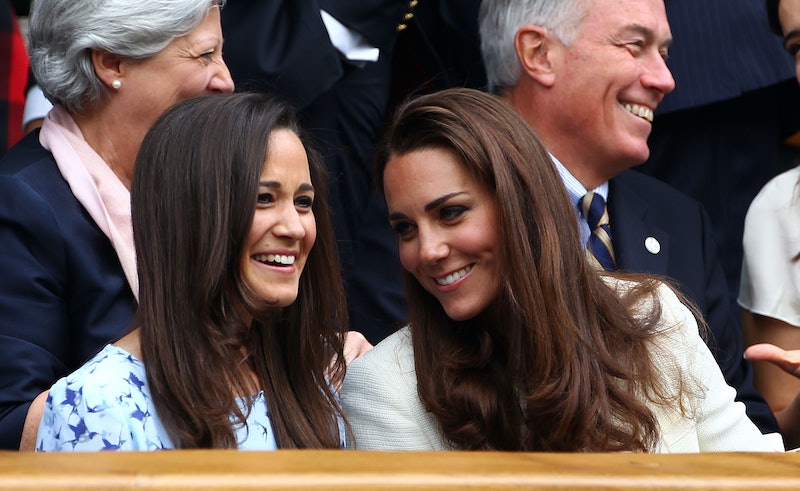 It's been a pretty big week for fans of the royal family. First, there was Princess Eugenie's star-studded wedding to Jack Brooksbank, then Prince Harry and Meghan Markle announced they're expecting their first child, and now Pippa Middleton is officially a mom. On Oct. 16, Kensington Palace shared Kate Middleton's reaction to Pippa's baby being born, People reported, and it's just as sweet and sisterly as you might expect.

The Palace released a statement on behalf of Middleton and Prince William in regards to Pippa's baby news, revealing, "The Duke and Duchess of Cambridge are thrilled for Pippa and James." Pippa and her husband James Matthews welcomed a baby boy on Monday afternoon, according to People, making Kate a proud aunt for the very first time.

While the new parents have yet to release a name for their newborn, they did share that he weighs 8 lbs. 9 oz. "Everyone is delighted and mother and baby are doing well," a rep for Pippa told People.

Pippa and James didn't officially confirm her pregnancy until this past June, but there was a lot of speculation surrounding whether or not she was with child in the months leading up. The younger Middleton sister opted to reveal the happy news via a piece for her fitness column in the U.K.'s Waitrose magazine, and confessed how preparing to have a baby had changed her exercise routine.

"When I learned the happy news that I was pregnant I realized I needed to adjust my 4 to 5-day-a-week routine," she wrote (via Hello!). Middleton also revealed her insecurities about being a first-time mom, writing, "This being my first pregnancy, I had so many questions I felt were still unanswered."

Despite her concerns, Pippa explained that she was eventually able to figure out the best way to work fitness into her pregnant life, writing in the Waitrose column:

"I’ve noticed my body change and weight increase, but through effective exercise and sports I feel that it’s been strengthened to support a healthy pregnancy, birth and recovery ... And ensure that post-baby, my old favorite jeans will still fit eventually!"

Luckily for Pippa, she and James have more than a few experienced mothers in their life to lend advice during the post-baby recovery process. Not only that, but Pippa and Kate will both be raising sons around the same age at the same time.

Kate and Prince William welcomed their third child — a boy named Louis — back in April. That means that her and Pippa's sons are just mere 6 months apart. Even though Kate is basically a pro at the whole mom thing by now, it'll no doubt be nice for her and Pippa to be able to share in some of their boys' growing pains together.

Pippa and James' son will also have two more close cousins growing up by his side: Prince George, 5, and Princess Charlotte, 3. They'll be able to teach him all kinds of fun things about every day high-society life, but their most valuable lesson of all might end up being how to steal the show at a royal wedding. That level of cuteness just never gets old.