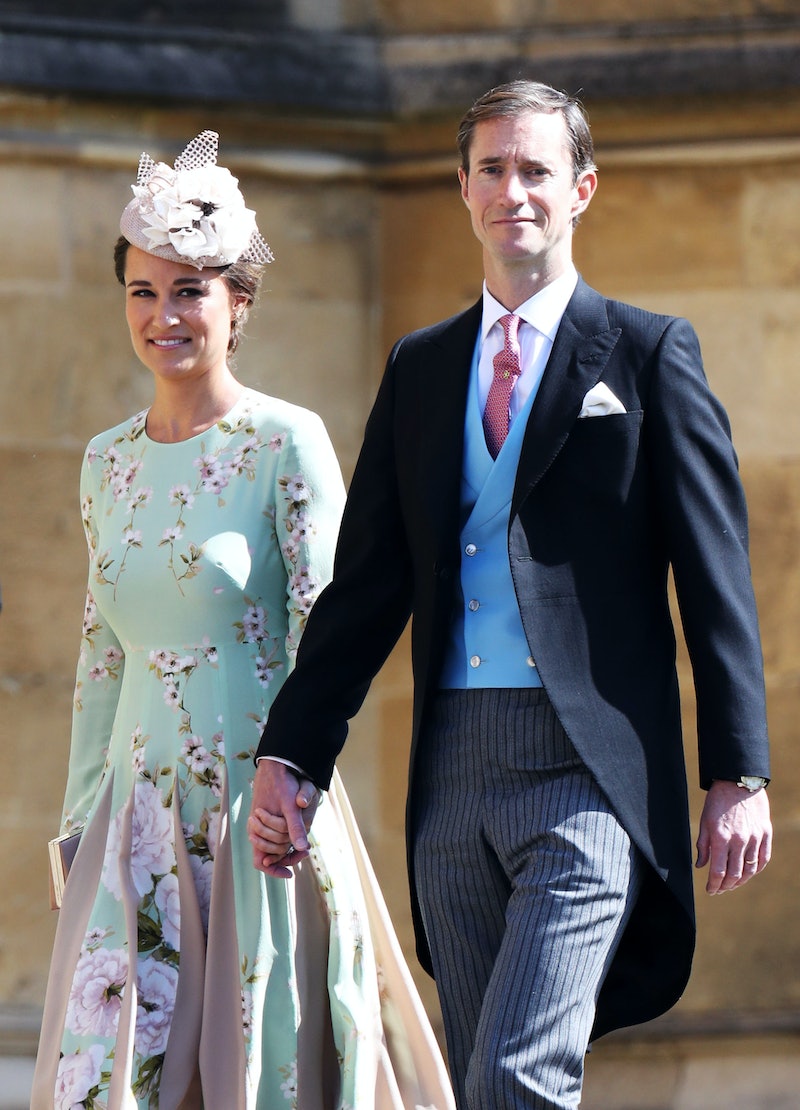 What a time for the royal family and their loved ones. On the same day that Meghan Markle announced her pregnancy, the Duchess of Cambridge's sister Pippa Middleton welcomed a baby boy with husband James Matthews. According to People, Pippa gave birth on Monday, and the news broke on Tuesday. Her rep told the publication, "Everyone is delighted and mother and baby are doing well."

Just like her big sister Kate Middleton, Pippa gave birth in the Lindo Wing of St. Mary's Hospital in London, where she was seen checking in on Monday. The Daily Mail shared photos of Matthews arriving with overnight bags at the hospital, sparking speculation that the baby would be arriving very soon. Suffice to say, the rumors were right. And according to The Daily Express, Kate and Prince William released a statement through Kensington Palace, which said, "The Duke and Duchess of Cambridge are thrilled for Pippa and James."

Pippa and Matthews' newborn will have plenty of cousins to play with, as Kate and Prince William have three children — Prince George, Princess Charlotte, and the youngest, Prince Louis. And soon enough, Meghan and Prince Harry's baby will join the bunch (although the Duchess of Sussex isn't due until the Spring). Kensington Palace announced Meghan's pregnancy in a statement, which read, in part, "Their Royal Highnesses have appreciated all of the support they have received from people around the world since their wedding in May and are delighted to be able to share this happy news with the public."

Given Pippa's own happy news, it's a majorly exciting time in the royal extended family. Especially since Pippa also recently attended Princess Eugenie's wedding to Jack Brooksbank, just two days before her baby's arrival. There's been so much to celebrate in less than a week's time — as well as so many new additions to the family.

As a recap, Pippa confirmed her pregnancy back in June. She shared the news in a British grocery store magazine called Waitrose, where she writes a fitness column. Her post mentioned she was able avoid any morning sickness, unlike her sister Kate who experienced Hyperemesis Gravidarum. Pippa wrote,

"I was lucky to pass the 12 week scan without suffering from morning sickness. That meant I was able to carry on as normal."

She also wrote about having to alter her fitness routine, adding, "When I learned the happy news that I was pregnant I realized I needed to adjust my 4 to 5-day-a-week routine." Pippa continued writing columns for Waitrose throughout her pregnancy journey up until the final month, sharing advice for stretching and meditating, as well as insight into her own experience.

Pippa and Matthews tied the knot in May 2017 at St. Mark's Church in Berkshire, England. At the time, E! News described Pippa's wedding as an "intimate ceremony," but it did include cameos from some royally famous faces, including her niece and nephew, Princess Charlotte and Prince George, as a bridesmaid and pageboy, respectively.

As proven at her wedding, Pippa is clearly no stranger to being surrounded by a bunch of adorable kids, so adding her own child to the mix must be beyond exciting. It's only a matter of time before royally cute photos surface, as well as the baby name announcement. Regardless, a major congratulations are in order in the meantime.