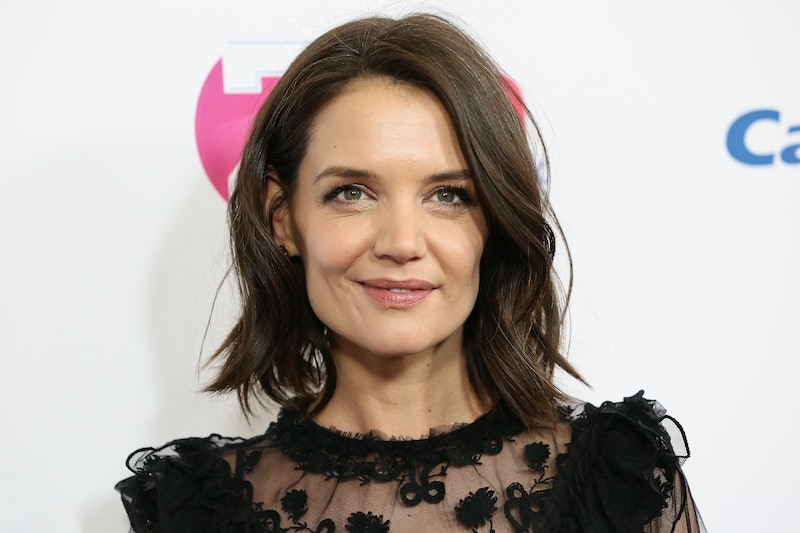 The holidays are a time to catch up with close friends and loved ones, to celebrate the new year with new memories — or by reminiscing about old ones. Katie Holmes clearly enjoys the later. Katie Holmes enjoyed a mini-Dawson's Creek reunion with costar Mary-Margaret Humes over the holidays, and shared the sweet photos on Instagram.

Humes, who played Dawson's mom, Gail Leery, and the actor formerly known as Joey Potter rang in 2019 by curling up by the fire and enjoying a sweet girls' night with — according to both of the actors' social media posts — plenty of wine and good conversation. "What a gift to share some wine and laughter with my dear friend @thereal_marymargarethumes," Holmes captioned a snapshot from her cozy evening. And, because she knows that everyone loves a good teen drama reunion, Holmes also made sure to caption the photo with "#dawsonscreek."

Humes also shared her own photo from their New Year's Eve celebrations, writing that she enjoyed, "wine and so much laughter with this beauty tonight...a great way to say farewell to 2018." In addition, Humes sent a message of love to her former costar, writing, "I seriously couldn’t love you more @katieholmes212."

This isn't the first adorable Dawson's Creek reunion that Humes has enjoyed this holiday season: On Dec. 23, she shared a photo of herself with her onscreen son, James Van Der Beek, and some of his children. "The BEST EVER start to Christmas vacation," Humes wrote, captioning the photo, "#dawsonscreek 💞family then and now."

Though Dawson's Creek ended in 2003, the cast of the beloved teen drama have remained close for decades, with Meredith Monroe — who played Andie McPhee — even admitting back in August that the cast members still keep in touch via a group chat. (And yes, we would die to be a part of that.)

"James, Josh, Katie... we're all in a group text," Monroe told Entertainment Tonight. "We reconnected and now we have a group text going again, so that's been nice."

Speaking about the cast's 20th anniversary reunion for Entertainment Weekly, Monroe explained, "It was like we didn't even skip a beat and a day hadn’t even gone by. It was a blessing. Throughout the years we would go in and out of touch [depending on] whatever was going on with people's lives, but we definitely did reconnect with the reunion, so it's been great."

The Dawson''s Creek cast have always had a very close relationship — in fact, one of the show's most beloved cast members even predicted that Holmes would one day marry Tom Cruise. In a December interview with The Daily Beast, Mary Beth Peil, who played Jen's grandmother, Grams, revealed that Holmes' crush on the Mission: Impossible actor was known from day one. According to Peil, when Cruise's ex-wife, Mimi Rogers, guest-starred on the show as Grams' daughter, Holmes showed off her knowledge of the actor after Peil brought up Jerry McGuire.

"Looking in the mirror, out of the corner of my eye, I saw Katie make the motion for me to ‘zip it,'" Peil remembered. "Then Katie launched into a big spiel about Tom Cruise being married to Mimi Rogers, Scientology, Nicole Kidman… She knew everything about him."

Referencing the well-known story that Holmes had posters of Cruise on her bedroom walls as a teenager, Peil added that her crush was a well-worn topic of conversation on the set. "She could not stop talking about Tom Cruise," Peil said. "This was way before they got together, but she was certainly ready for him."

While she's probably not talking about her childhood crushes as much anymore, it's clear that Holmes' relationship with her former costars has remained just as strong as ever. Here's hoping she'll continue to share those adorable reunions for Dawson's fans to enjoy.