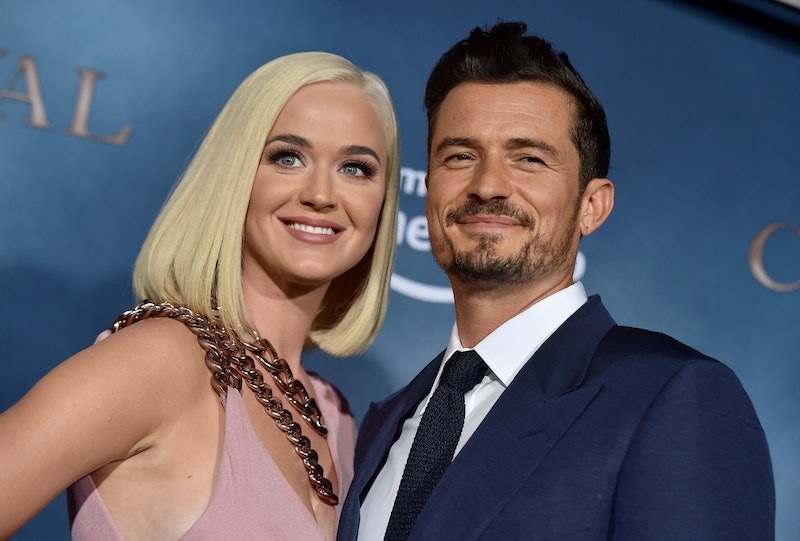 Katy Perry isn't letting social distancing stop her from having a gender reveal event, or from sharing the big news with her social media followers. On Friday, April 3, Katy Perry revealed she's expecting a baby girl with her fiancé Orlando Bloom in perhaps the sweetest way possible — literally, as the pop singer shared a photo of Bloom's smiling face covered in pink-hued frosting on Instagram. Alongside the photo, Perry wrote simply, "it's a girl," along with plenty of pink heart emojis, and added some excitement by changing her location to "Girls Run the World."

On March 5, the singer announced that she was expecting her first child via the music video for her single, "Never Worn White," in which she wears a white gown and cradles her growing baby bump. "Omg so glad I don’t have to suck it in anymore," Perry wrote on Twitter, before revealing to fans that she is due to give birth — to both her child and her next album — in the coming months.

"There's a lot that will be happening this summer," Perry told fans during an Instagram Live after the video's premiere, according to Hello! magazine. "Not only will I be giving birth, literally, but also figuratively to something you guys have been waiting for. So let's just call it a double whammy. It's a two-for."

According to Us Weekly, Perry and Bloom first met at the 2016 Golden Globes, where they formed a strong connection by sharing cheeseburgers at their table. The singer made their relationship social media official in May of that year, and on Valentine's Day 2019, the actor popped the question with a ruby and diamond, flower-shaped engagement ring. "I said yes to a life of love and evolution," Perry wrote on Instagram, adding that there was "definitely never a dull moment" in their relationship.

During an 2019 appearance on Jimmy Kimmel Live!, Perry revealed that Bloom actually proposed during a surprise helicopter ride and though it was "very sweet," it almost went horribly wrong for the actor. "We had champagne in the helicopter and the box was in his pocket, and he had written down everything he wanted to say in a note to divert. He was gonna pull [the ring] out while I was reading it," Perry told Jimmy Kimmel. However, the champagne bottle broke, so the singer watched her beau pull a "box that's too big for his coat pocket" out and rip his jacket as he attempted to get ready for the proposal.

In February 2020, Perry told Stellar Magazine that she was more of a "bridechilla as opposed to a bridezilla, and that both she and Bloom were taking wedding planning seriously. "Orlando and I are united with our approach. It’s not about the party it’s about the coming together of people who will hold us accountable when things get really hard," she explained, adding that her she wants to celebrate that her fiancé "challenges [her] to be [her] best self."

The couple were reportedly planning to get married in Japan in a small ceremony early this summer, but in March, a source told People that Perry and Bloom had postponed their wedding due to concerns over the spread of COVID-19. "It was all set for Japan with 150 guests. Katy was actually really excited about walking down the aisle pregnant," the source told the outlet. "They were both so elated that all the wedding details were finally coming together, but they are hitting pause because of coronavirus."

Even if the couple will have to wait a little bit longer to tie the knot, it's clear based on their gender reveal that Perry and Bloom are doing their best to celebrate their growing family with as much joy as possible.

More like this
Kanye West Apologizes To Kim K "For Any Stress I Have Caused" In Rare Interview
By Jake Viswanath
Adam Levine Denies Having An Affair — But Admits He “Crossed The Line”
By Jake Viswanath and Radhika Menon
Bachelorette Gabby Kissed Her New Fiancé On 'Dancing With The Stars'
By Jake Viswanath
Is Dua Lipa Dating Trevor Noah? New Photos Show Them Kissing & Hugging
By Brian Anthony Hernandez and Martha Sorren
Get Even More From Bustle — Sign Up For The Newsletter