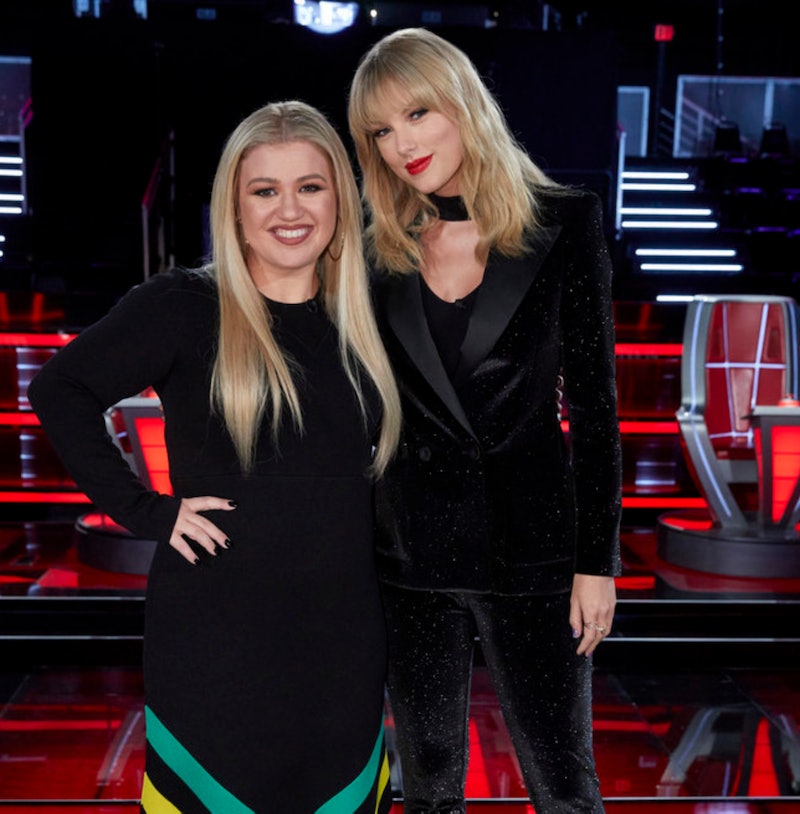 There may be no better way to celebrate The Voice’s latest Mega Mentor Taylor Swift than by watching Kelly Clarkson’s cover of “Delicate” by Swift. At the top of the Tuesday, Nov. 5 episode of The Kelly Clarkson Show, Clarkson opened the show as she always does: with a segment where she sings other artist's songs called "Kellyoke." On this particular episode, she belted out the sixth single off of Reputation in honor of her Voice colleague. Swift retweeted the video of the performance, suggesting that she approves of this cover. Granted, it is the one and only Kelly Clarkson nailing one of Swift's most intimate tracks.

Clarkson's rendition of "Delicate" is not her first time covering a Swift song. She has covered "Blank Space," "Shake It Off," and other songs during her concerts, and naturally, Swift sure seems to be all about it. Per Elite Daily, after she saw one of Clarkson's covers in 2015, the "You Need to Calm Down" singer tweeted, "Kelly Clarkson covered Blank Space and YES." The two shared another special cover moment when Clarkson included a snippet of one of Swift's tunes in the medley of popular singles she performed at the top of the 2018 Billboard Music Awards. During the "Look What You Made Me Do" segment, the camera cut to Swift in the crowd as she jokingly rolled her eyes, checked her nails, sang along, and then burst into laughter.

Now the two are officially costars on the 17th season of The Voice with Swift acting as a mentor to all four teams and Clarkson being one of the four main coaches. While both have appeared on The Voice before, this is the first time they have been part of the same roster: Swift was an advisor on Seasons 4 and 7, and before Clarkson became a coach in Season 14, she helped out on Seasons 2 and 13.

Recently, Swift and Clarkson's names ended up in headlines together when one reached out to the other via social media about music rights. Following the news that Scooter Braun bought the master recordings of Swift’s first six albums in June, Clarkson offered up a supportive piece of advice. On July 13, the original American Idol winner suggested to Swift on Twitter that she re-record all of the songs, writing, "I'd buy all the new versions just to prove a point." When Clarkson appeared on The Tonight Show Starring Jimmy Fallon in September, she shared that while she does not care about owning her own masters, she understands why Swift feels differently. Clarkson explained to Jimmy Fallon, "I write a little more than half of my stuff, but hers is a hundred percent of it, so it's hers, so I can see how it would matter."