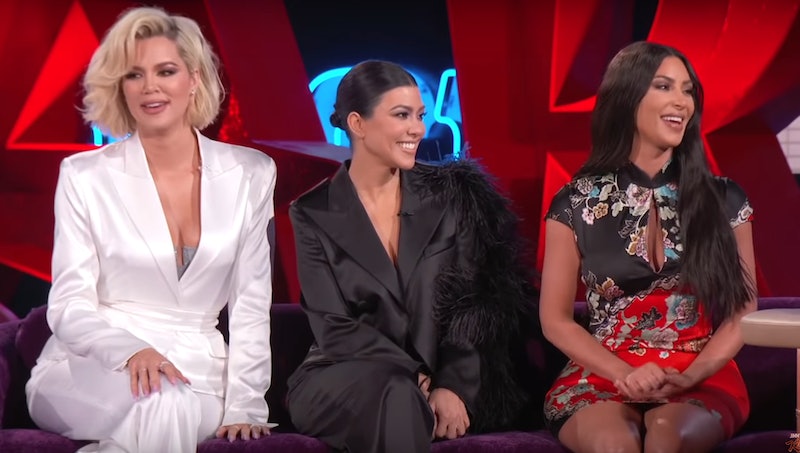 It's totally normal to want to shrug off advice from your family — especially when it comes to relationships. It can be tough to see clearly when you're in the throes of love, but then again, hindsight is 20/20, right? During a recent interview on Jimmy Kimmel Live, Khloé Kardashian discussed her tendency to date basketball players. Since the last one she was with didn't exactly pan out, it sounds like she might finally be ready to listen to her grandmother — and start dating accountants instead.

On April 1, Khloé and her sisters Kim and Kourtney all spoke to Kimmel in Las Vegas, where the host has been taping a series of special shows. The lengthy interview covered all kinds of topics, from what Kim and Kanye might name their fourth child (Kim likes "Rob," but said it doesn't exactly "go" with North, West, and Saint), to Kourtney's upcoming 40th birthday party (which Khloé, Kris Jenner, and Kanye West are planning), to whether or not Kim and Kanye are *actually* moving to Chicago (TBD).

At one point during the interview — kind of out of nowhere, honestly — Kimmel turned to Khloé and said, "Oh, I do want to ask about this character you had a baby with." That "character" would be Tristan Thompson of the Cleveland Cavaliers, who was recently accused of cheating on Khloé with Jordyn Woods, after which Khloé and Thompson broke up. (Bustle previously reached out to Khloé, Woods, and Thompson for comment on the rumors, but did not hear back. In a Red Table Talk interview, Woods denied being "intimate" with Thompson.)

"Is it time to stop dating basketball players?" Kimmel earnestly asked, causing the crowd to erupt in cheers. "Is that a 'yes' or a 'no'?" Khloé joked (it was a resounding "yes," for the record).

It's safe to say that Khloé didn't exactly seem thrilled with Kimmel's prompt, but she smiled through any discomfort and ended up being a good sport about it. "I like what I like, what can I say?" she told the host.

"Do you like basketball?" he asked. "I actually do," she said, adding that she "just [likes] to observe," but doesn't really play the sport herself.

Khloé then revealed that Kimmel definitely wasn't the first person to suggest that she might try seeking romantic partners outside of the NBA. "But I do agree, I should have listened to my MJ, my grandmother. I should probably start to date accountants or something like that."

Can you even begin to imagine Khloé — or any of the Kardashian-Jenner sisters, really — dating an accountant? Or dating anyone that wasn't at least kind of famous on some level? It'd be a change of pace, for sure. It certainly wouldn't hurt for Khloé to try switching things up a little bit, though. Change can be good!

Seeing as how Khloé just got out of a relationship, she's probably not all that interested in dating anyone anytime soon. Besides, she's got little True to keep her company if she's ever feeling lonely — and have you seen that child? She basically radiates cute.

Once Khloé decides she's ready to dip her toe back into the dating pool, perhaps this time, she'll take her grandmother's — and Kimmel's — advice. Or maybe she won't and that's fine, too. It's her life, let her live it.