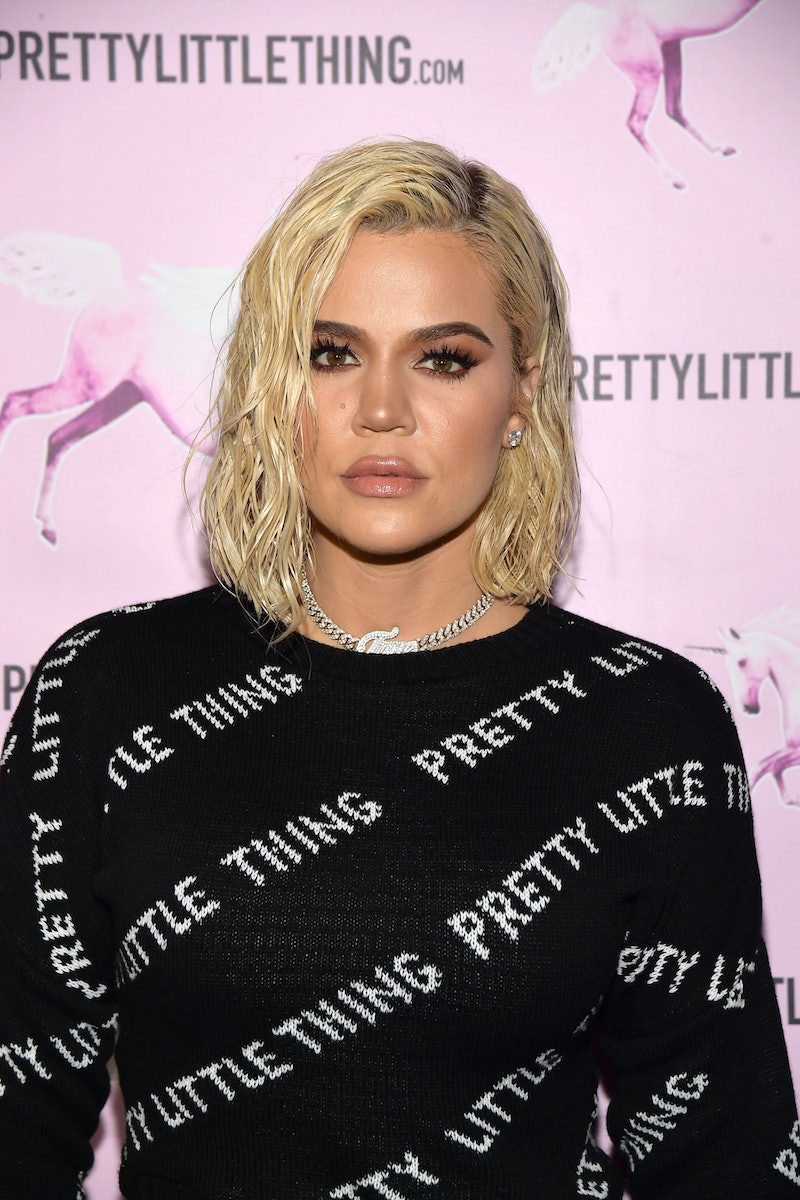 It's been eight months since Khloé Kardashian split from her baby's father Tristan Thompson, following cheating allegations that rocked her family and the internet. Even after that time, Kardashian is still processing the Thompson scandal, but she doesn't want to be seen as a "victim" in the situation.

While on Jay Shetty’s On Purpose podcast, Kardashian revealed dating is not a priority for her right now. However, she made clear she "forgives" her ex for what he did, saying, "It’s only going to hurt me if I’m holding onto this anger and playing this victim role. I don’t believe in being a victim." Instead, she'd rather "push through" those feelings and focus on healing. Kardashian also hopes her actions following the scandal will teach True a lesson in forgiveness, since she still considers Thompson to be a "great person."

After everything that's happened — infidelity claims, cryptic Instagram posts, and a breakup — Kardashian is working on getting along with Thompson, because "he never hurt True" and she "will never come between" their father-daughter relationship. Still, co-parenting with an ex comes with challenges, which is something Kardashian addressed back in July, telling Us Weekly, the whole thing is "still sometimes awkward," but they're both trying their best and the baby is their top priority.

Kardashian and Thompson's relationship faced not one, but two separate instances of cheating claims. Back in April 2018, grainy videos surfaced that seemingly showed Thompson cheating on Kardashian, who was nine months pregnant at the time, with multiple women. The reality star stuck by her then-boyfriend despite the accusations (which Thompson has never publicly addressed).

However, the following February, another cheating report surfaced involving Jordyn Woods, the long-time BFF of Kylie Jenner and close friend of the entire Kardashian-Jenner crew. (Woods denied being "intimate" with Thompson, but claimed he kissed her on the lips. Thompson has continued to stay silent about all claims of infidelity.) That appeared to be the final straw for Kardashian, as she split with Thompson around the same time the news broke publicly.

Even though Kardashian is working on moving past her breakup, the Cleveland Cavaliers player might not be ready to close that door for good. Earlier this month, a source told People that he's "showed more of an interest" in reconciling with the reality star, and that "he seems to want more than [to] co-parent with Khloé." As for how Kardashian feels, the same source claimed she "has moments when she is toying with the idea of getting back with Tristan."

Whether or not that'll actually happen is currently unclear, but Thompson has been popping up in Kardashian's Instagram comments recently and raising fans' eyebrows in the process.

More like this
Khloé Kardashian Writes Touching Instagram Tribute To Tristan Thompson’s Mother
By Alyssa Lapid
RHOP’s Robyn Dixon Explained Why Juan Paid For Another Woman's Hotel Room
By Brad Witter
'Love Island' Has Added Yet Another Bombshell To The Villa
By Bustle UK
Kylie Jenner Clarified How To Pronounce Her Son's New Name
By Jake Viswanath
Get Even More From Bustle — Sign Up For The Newsletter
From hair trends to relationship advice, our daily newsletter has everything you need to sound like a person who’s on TikTok, even if you aren’t.