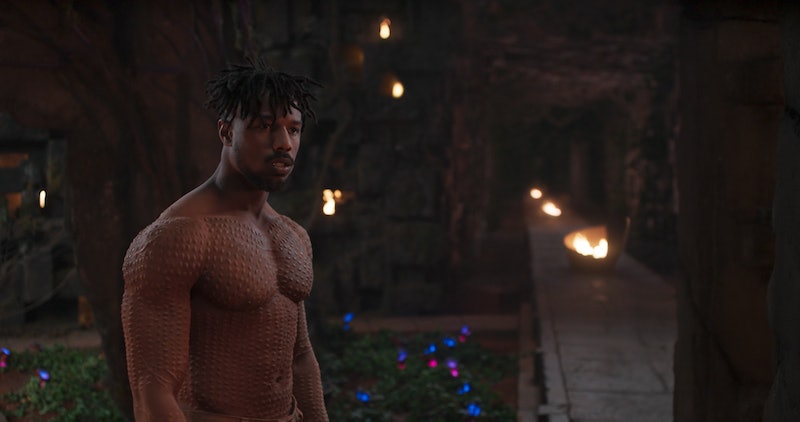 Black Panther is filled with fun and intriguing characters, from superhero king T'Challa to his genius sister Shuri to Dora Milaje general Okoye. But perhaps the film's most compelling character is villain Erik Killmonger, played by Michael B. Jordan. Jordan has drawn raves for his portrayal, with many fans citing his character as their favorite in the film. But frankly, that's a bit surprising, because Killmonger in the Black Panther comics isn't exactly a super well known character.

When it comes to the villains of Marvel comics, just like with their heroes, there is most certainly a division between the A team and the B team. Everyone knows the heavy hitters like Loki, Magneto, Doctor Doom, Thanos, and Doctor Octopus, but there are so many lesser villains in the comics that aren't nearly as well known. And due to the movie rights to a number of Marvel's most iconic villains belonging to other studios, the MCU has had to dip deep into their bench of reserves for many of their movie villains. That's how MCU films have ended up with little-known (and often forgettable) villains like Whiplash, Kaecilius, and Aldrich Killian as the main antagonists in some of their films.

And at first glance, it would seem that between Black Panther's trio of villains — Ulysses Klaue, M'Baku, and Killmonger — Killmonger would be the least memorable, since he's the least iconic in the comic world. But thanks to Jordan's performance, Killmonger is quickly on his way to becoming an icon, so here's what you should know about the villain's humble comic beginnings.

The character of Erik Killmonger was first introduced in 1973, in issue 6 of Jungle Action. At the time, Jungle Action was the first Marvel title to star Black Panther as the main character, as the hero (who was introduced in Fantastic Four #52 in 1966) would not receive his own self-titled comic series until 1977. The comic book version of Killmonger was born in Wakanda under the name N'Jadaka, but after his father worked for the villain Ulysses Klaue, his entire family was exiled from the country by T'Challa. N'Jadaka settled in Harlem and changed his name to Erik Killmonger, while he trained his mind and body in the hopes of gaining revenge against the Black Panther for exiling him from his homeland. He eventually returns to Wakanda and begins causing trouble, setting up a confrontation with T'Challa where he defeats him in their initial fight before being defeated.

Killmonger's ultimate goal was to overthrow T'Challa as the leader of Wakanda, and he teamed up with various supervillains throughout the 1970s in an attempt to do just that. However, he was never successful, and was ultimately killed by T'Challa in Jungle Action #17. But since no one ever stays dead in comic books, Killmonger eventually returned after being magically resurrected by Iron Man villain The Mandarin in 1982. He again attempted to overthrow T'Challa and was again killed, only to be resurrected once more in 1996 while again trying to take over Wakanda. This time though, Killmonger actually succeeded, and briefly became both ruler of the country and the new Black Panther after defeating T'Challa in ritual combat. However, his reign was short lived. After being usurped by T'Challa, Killmonger managed to take over Wakanda's neighboring country Niganda before being killed by former Avenger Monica Rambeau (one-time Captain Marvel) in 2008, this time for good (so far).

The character of Killmonger from the comics does bear some similarities to the version embodied by Michael B. Jordan in Black Panther in that they both hold a grudge against T'Challa and both desire to rule Wakanda themselves. But thanks to the movie version's more complicated, and some would say virtuous reasons for his doing so, that's the version of the character that's going to go down as an icon.