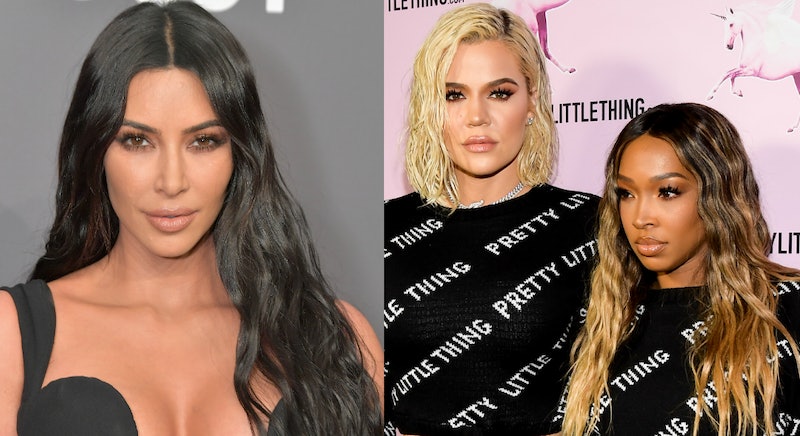 Buckle your seatbelt and keep checking Instagram Stories, because Kim Kardashian, Khloé Kardashian, and Malika Haqq are on the road. Er, Kim Kardashian, Malika Haqq, and someone who is almost definitely Khloé Kardashian are on the road. And we know this because Kim has been documenting their "girls' trip" on Instagram and Snapchat. On Thursday, Kim, Malika, and Khloé all climbed into an SUV headed to... somewhere that is not Calabasas? We will just have to sit tight and stay tuned.

Eesh, if there is one person who could use a girls' trip with her sister and her best friend right about now, it is Khloé. On Tuesday, Us Weekly and E! News confirmed Khloé and her boyfriend, Tristan Thompson, split up after two years. That same day, Tuesday, TMZ and Hollywood Unlocked claimed that over the weekend, Thompson reportedly cheated on Khloé with Kylie Jenner’s best friend, Jordyn Woods. (Bustle previously reached out to reps for Kardashian, Woods, and Thompson regarding the rumors, but did not hear back.)

The cheating rumors have not been confirmed. After the story broke on Tuesday, E! reported that Thompson tweeted and deleted "FAKE NEWS." On the other hand, Khloé did respond to Hollywood Unlocked's Instagram post regarding the claims with a row of speaking head emojis, and Malika added "STRONG FACTS."

Two days after all of these rumors and reports hit the internet, Kim, Malika, and Khloé hit the dusty trail and fired up some tunes.

In the clips, Kim and Malika sing along with Nivea’s “Don’t Mess with My Man” and Brandy’s “Who Is She 2 U." At one point, Kim says “Girls' trip!” and pans over to the seat in front of her where a blonde person in a pink furry coat is scrolling through their phone.

We do not see the person's face, but that sure does look like the pink furry coat Khloé wore while she was in Japan last year.

Kim was quick to take a few of the posts down, but fortunately, some of her followers were quick to save the videos before they disappeared.

Sure, those songs could've just randomly popped up on Pandora or whatever. Sure, maybe Kim just happened to fire up her phone's camera right when these particular tunes happened to be playing.

Sure, the way Kim points at the camera as she mouths along with lyrics like "Find someone that you can call your own/Cause now you're walkin' in the danger zone" and "Who is she to you/My eyes can see/Something's going on between you two" could have absolutely nothing to do with the claims that surfaced earlier this week.

And sure, this girls' trip might've been something Kim, Malika, and Khloé planned months and months ago, not a reaction to all of the stuff that's happened in the Kardashian universe this week. Sure, it could all be a coincidence. But man, would it be quite a coincidence.