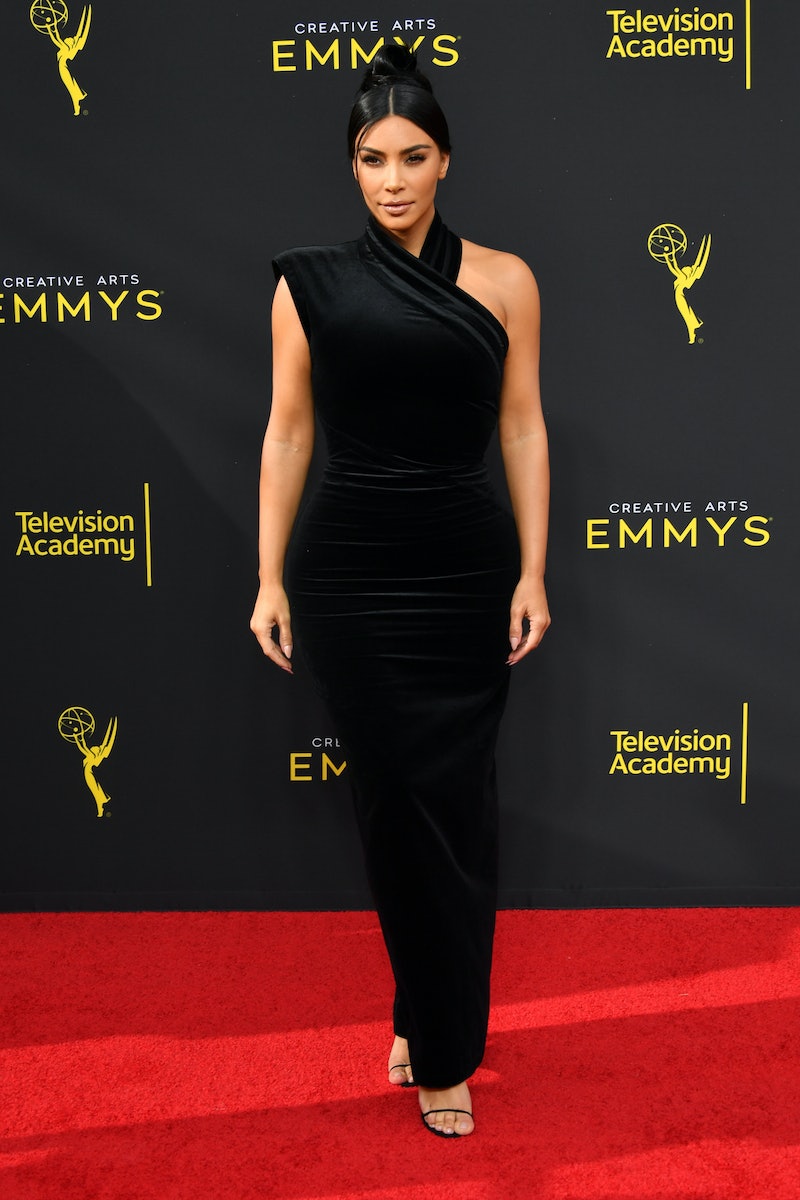 Kim Kardashian West's business ventures can be difficult to keep up with. Between KKW Beauty landing in Ulta to her shapewear brand Skims' launch, there's a lot going on. But KKW's Body fragrance was almost definitely a product you caught wind of (and not just because it was perfume). The bottle made headlines because it was shaped identically to Kardashian West's own. Clearly, the hype over the packaging hasn't died down yet because someone gave Kardashian West a KKW Body-shaped floral arrangement for her birthday.

Khloe Kardashian first posted a video of her sister's multitude of floral arrangements to her Instagram story, focusing on one that stands out in particular. Amongst the usual bouquets of roses and orchids, there was a brown arrangement that was clearly meant to emulate KKW Body. The flowers aren't just in a similar shape to the bottle, though. They're an exact duplicate, built out to be three dimensional just like the now-iconic KKW Fragrance. At the top, there's even a nozzle to make the comparison between the florals and the perfume more obvious.

In the video, Khloe exclaims, "Only Kimberly gets a flower arrangement like this. Yasss, Kim! That's when you are on and popping."

In case you don't remember KKW Fragrance's Body scent (which seems unlikely, but hey, not everyone has encyclopedic knowledge of the Kar-Jenners), Kardashian West launched the perfume back in April 2018, and while yes, it is a perfume, the scent was potentially the least interesting thing about the new KKW product. The bottle is what got all of the attention.

According to Kardashian West herself, in order to create the packaging for KKW Body, she told a mold of, well, her body. Yes, that is KKW's actual figure created from a mold and shrunken to become a perfume bottle.

Now, it's in floral arrangement form.

Of course, Kardashian West didn't just celebrate her birthday with flowers (though she had a lot of them). She also had a churro stand, a beignet truck, and a catered dinner with family according to her Instagram stories, and that's after spending the weekend in Palm Springs.

Clearly, KKW knows how to celebrate a birthday, and based on that floral arrangements, her friends do as well.

More like this
Dua Lipa On YSL Beauty, Plus Her Fearless Approach To Hair & Makeup
By Erin Stovall
Jenna Ortega's Hair Routine Occasionally Involves Washing Out Fake Blood
By Olivia Rose Ferreiro
Hailey Bieber's Best Hair Moments Of 2022
By Audrey Noble
Khloe Kardashian's Mermaid-Length Waves Give Major Goddess Vibes
By Olivia Rose Ferreiro
Get Even More From Bustle — Sign Up For The Newsletter