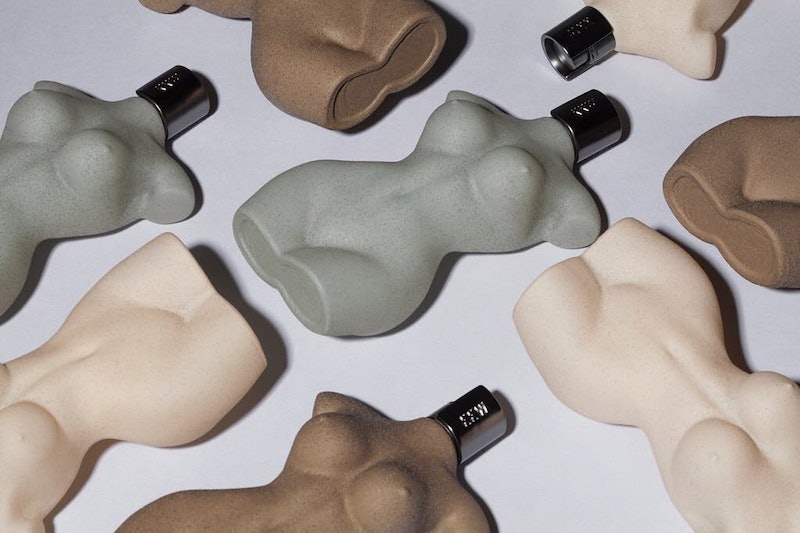 All has been relatively quiet on the KKW Fragrance front, but if you follow Kim Kardashian's fragrance brand on social media, you'll know that she and the brand seem to have been gearing up for something. Now, fan know that two new KKW Body fragrances are coming, and these new scents have something for every day (see what I did there?).

For the past several days, KKW Fragrance has been posting images of various nude bodies on their Instagram and Twitter feeds. The images were captions with the brand's name and the date Nov. 2. Turns out, the brand is set to release not one but two new KKW Body fragrances to go alongside the original Body scent and it's iconic bottle.

According to Kardashian's personal Twitter account, her brand is launching a new perfume and a new unisex fragrance that will both launch on, you guessed it, Nov. 2 at noon PST/3pm ET.

The new KKW Body II perfume is described as a "beachy floral" and has notes of bergamot, mandarin, and neroli. As for KKW Body III, it's Kardashian's new unisex fragrance and is the first she's released. It's scent is spicier with notes of pink and black pepper as well as sandalwood and cedar.

While all of the KKW Fragrance launches have been huge deals for the KKW Beauty owner and Keeping Up With The Kardashains star, KKW Body may have gotten the most attention. Why's that? Well, if you saw its bottle, the answer is fairly obvious.

Unlike the crystal shaped bottles of the Crystal Gardenia collection or the super cute Kimoji Heart shapes of her Valentine's Day collection or the fruity and Kimoji themed perfumes from earlier this year, the KKW Body bottle was, well, KKW's body.

When the first KKW Body fragrance launched, its bottle caused quite a stir thanks to its anatomically correct recreation of Kardashian's own famous figure. In fact, Kardashian took a mold of her body to make sure that the bottle was accurate to her figure. Now, that's dedication.

As for what the KKW Body II and KKW Body III fragrance bottles will look like, there's been no word, but a photo of Kardashian's Twitter seems to suggest the bottles will still be shaped like her own. They're simply come in different stone-themed colors. Really, though, there's only one KKW, so why not keep the bottle the same? She did get covered in clay to do it.

People are ready for its debut.

They're planning their purchases already.

While scents don't actually have a gender and you should wear WTF you want to wear, Kardashian's fans are praising her for listening to her regarding a scent they believe works for both genders.

If you want to snag one of the two new KKW Body fragrances, mark your calendar for Nov. 2 at noon PT. Given the popularity of the last scent, you'll definitely want to schedule time for this launch.