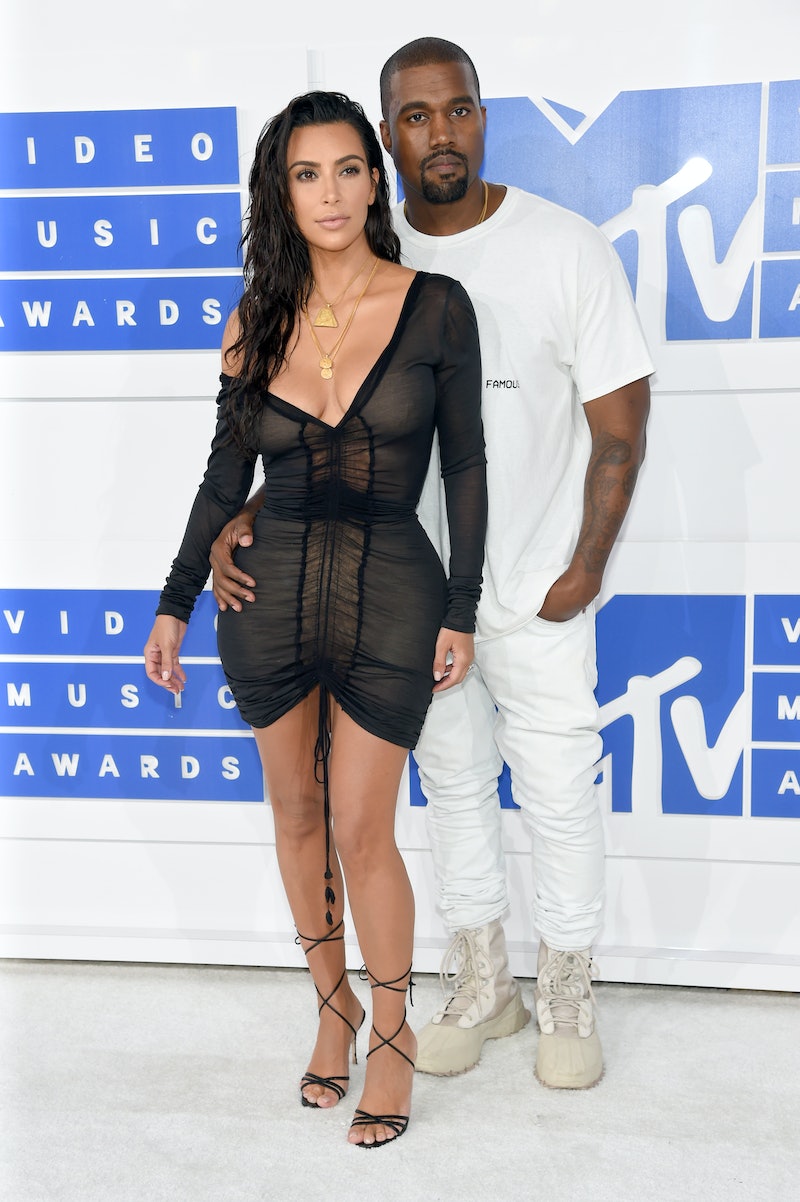 When it comes to birthday presents, the Kardashian-West household goes big — really big. Kim Kardashian's birthday flowers from Kanye West continued the couple's tradition of celebrating with elaborate, over-the-top presents, as the reality star woke up to find giant, hanging floral arrangements all over her living room on Saturday, Oct. 20.

Kardashian showed off her early birthday present (she turns 38 on Oct. 21) from her husband on her Instagram story, where she explained that "Kanye is the most creative when it comes to sending flowers for my birthday!" The mogul made sure to show off the multiple arrangements of exotic pink and purple flowers that were hanging in her living room from multiple angles, while gushing over her husband's sweet birthday gesture. "Love you so much babe," Kardashian captioned a video of the elaborate plumage.

In his own video of the flowers, West explained that he had a very sweet intention behind designing the flowers for Kardashian's birthday. "@KimKardashian, you're stunning," the rapper wrote in a Twitter post, which showcased the collection of flowers, as the couple's 5-year-old daughter, North, danced around the room while a pianist serenaded the famous family.

"I will keep trying to make things that can express how beautiful you are inside and out and how much I love you and our family," West captioned the video.

Kardashian's Instagram Story posts about the flowers — which stood out against the family's minimalist, all-white living room — also highlighted her husband's romantic gesture, as she showed off the private piano performance happening in her home. "This is what I wake up to, guys," Kardashian said about the sweet surprise.

While neither West nor Karashian explicitly stated that the piano serenade was part of her birthday present, West has treated his wife to private performances in the past. In May 2016, the rapper surprised Kardashian on Mother's Day with a private orchestral performance in their living room, where they played both Kardashian and daughter North's favorite songs.

The famous couple have a long history of treating each other with incredibly over-the-top presents for their birthdays, holidays and other special occasions. In June, they treated friends and family to a Ye-themed bash for West's 41st birthday, where they served cookies with the rapper's face on them and a cake designed to look like his album cover.

One month earlier, Kardashian revealed that she dyed her hair platinum blonde as an anniversary present for West, who has long expressed that his preference for his wife's blonde locks. "I am back blonde," Kim said in an Instagram video, where she first showed off her new look. "Kanye's favorite is blonde, so I did it for our anniversary."

While all of their gifts to each other have been incredibly creative and sometimes, completely over-the-top — like when Kardashian treated West to a surprise trip to Japan for his 40th birthday — it's clear that there's a strong undercurrent of love in everything the famous couple gives each other.

After all, if you can afford to present your wife with towering flower walls or honor her business savvy with a box full of stocks for some major companies, why not use gift-giving occasions to find new ways to show her that you love her?

This year, however, West isn't the only one celebrating Kardashian's 38th birthday in an unexpectedly sentimental way: on Oct. 21, E! is airing a Keeping Up With the Kardashians marathon that will feature episodes that were hand-picked for fans by the birthday girl herself. And considering that plenty of the episodes Kardashian could have chosen feature some of her and West's most romantic moments, it's a surefire, sentimental way to celebrate the reality star's big day, without having to spend money on flowers.