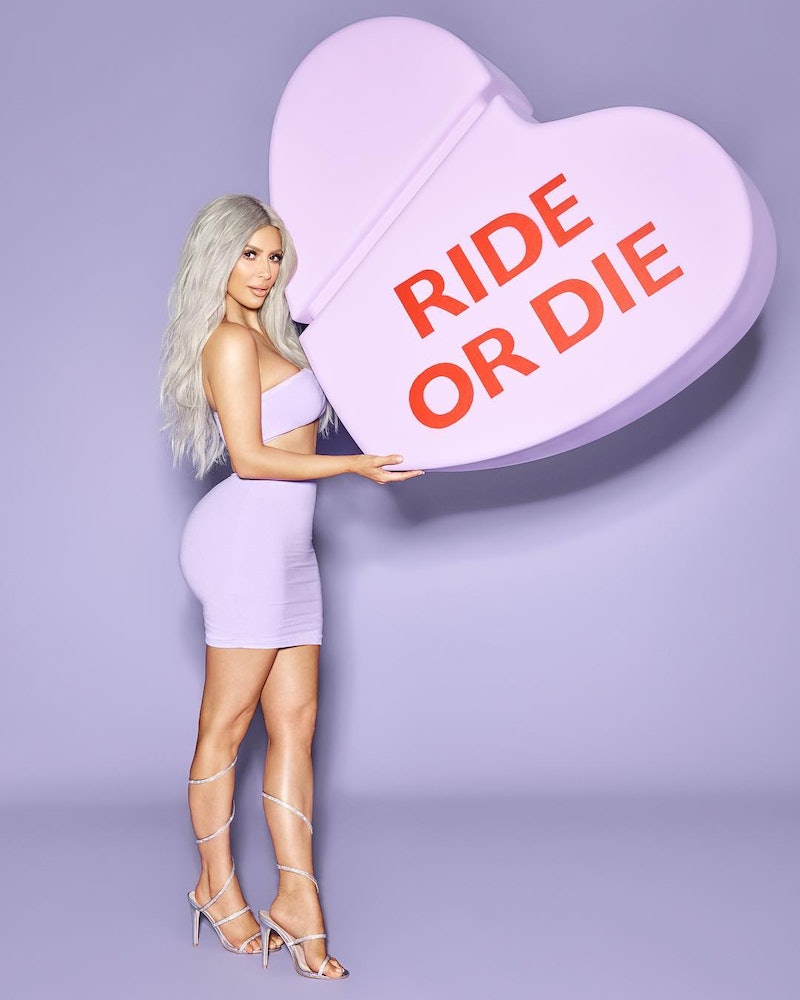 When it comes to product launches, an argument can be made that no one does it like a Kar-Jenner. This time, it's Kim Kardashian's turn. Kimoji Heart Fragrances were just released, and after seeing solid chocolate PR packaging on Instagram and Snapchat, her super cute promo images, and that adorable packaging, fans were definitely ready for the KKW Fragrances.

In honor of Valentine's Day, KKW Fragrance decided that their Crystal Gardenia trio wouldn't be the only scents up for grabs for your significant other, best friend, or sister's cousin's aunt. Kardashian created three brand-new fragrances inspired by her Kimoji hearts (which are basically the Kim Kardashian version of candy hearts). With everything from fruity, floral, and sensual smells mixed in, these new perfumes may just be perfect for everyone.

You no longer have to wait to snag them, either. The KKW Kimoji Heart fragrances launched Feb.1 at noon PT/ 3 p.m. ET, and fans were stoked to get their hands on the perfectly packaged, Valentine's Day smells. One of the best parts of the launch, though, has to be that despite being a KKW product, the new scents won't break the bank. Ringing in at $30 per perfume, they're actually pretty affordable.

As for the names of the scents, they appear to be themed. There's BFF, Ride or Die, and Bae. Each scent seems to be geared toward a specific person in your life, and when you get them in the mail, you'll be able to find out for certain. Unfortunately, there's no way to sniff these heart-shaped smells through a laptop.

The launch may be fresh, but if you want to shop the Kimoji Hearts, you may want to move fast. As of press time, there has been no mention of a restock on these items. While the Crystal Gardenia scents did ultimately get restocks, you never know given that these products certainly seem to center around Valentine's Day.

Plus, based on fans' reactions to the fragrance and its launch, a sell-out appears to be imminent. From those praising Kim to those who are completely obsessed with the packaging, the hype around KKW Fragrance's Kimoji Hearts is real, and fans are definitely letting the beauty icon now that they're officially in love with her latest cosmetics endeavor.

Fans are so in love with the packaging, and honestly, those heart shapes are so Valentine's Day perfect. Who wouldn't want to snag them for their own?

Other fans are letting Kim know that they purchased one of the scents on Twitter using what else? Gifs of Kim K. herself.

They're giving her real proof by showcasing their receipts online.

Some fans didn't just purchase one of the KKW Kimoji Heart Fragrances, though. They bought all three! Plus a large size Crystal Gardenia to boot! Now that's commitment.

Some fans are a bit disappointed, though. They believed the chocolate heart that she sent in her PR boxes would be included. Unfortunately, that's not the case.

The actual fragrances are making major waves on Twitter for more than just their launch, though. Kardashian took to her Snapchat to explain that she'll be sending the fragrance to everyone, including her haters. Then, she savagely posted what certainly seemed to be a list of said hater.

Clearly, Kardashian knows how to send a message. For those not on her bad side and for mere mortals who don't know her personally, you'll need to head over to the KKW Fragrance website and snag one of the new Kimoji Heart Fragrance. With her latest Snapchat, though, you may want to act fast. Kardashian certainly has created a stir with this launch.