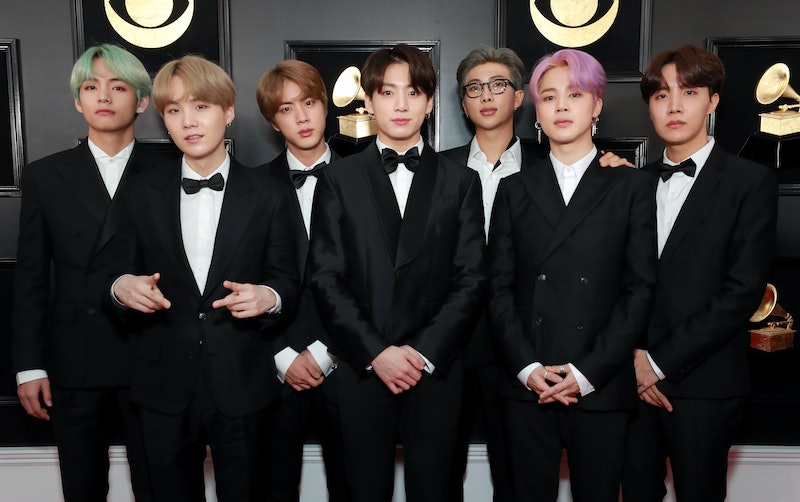 Winter is coming ... and so are some exciting first-time Saturday Night Live hosts. On Wednesday, March 13, SNL announced that Kit Harington and BTS will both make their SNL debuts in April, and fans are already celebrating the big news on social media.

The late night sketch show unveiled three upcoming hosts in a post on Twitter, starting with Killing Eve star Sandra Oh making her own hosting debut on March 30, alongside musical guest Tame Impala. Though the actor is best known for her dramatic roles, she showed off her comedic chops back in December, when she hosted the Golden Globes alongside Andy Samberg.

"Sandra Oh is the best person on earth," Samberg told Jimmy Fallon about his co-host during a January appearance on The Tonight Show, which should excite fans for her SNL appearance. "We met briefly, we presented at the Emmys, and then we spent the last week and a half working on the Globes ... We just sort of liked each other so much from that one experience we decided to go for it because they asked."

The following weekend, on April 6, Harington will take over hosting duties with singer-songwriter Sara Bareilles as the musical guest. And on April 13, Emma Stone will host the show for the fourth time, while BTS will hit the SNL stage for the very first time alongside the Oscar winner. Naturally, the news has BTS fans counting down the days until the history-making show:

BTS' performance will come just one day after their highly-anticipated new album, Map of the Soul: Persona is released in the US. Though the band haven't released any details about the upcoming project yet, the album is expected to follow in the footsteps of the band's May 2018 release, Love Yourself: Tear, which became the first Korean-language album to top the Billboard 200 Chart. Their new gig as the first K-Pop band to perform on SNL is yet another milestone in the band's massive, history-making career, which includes being the first K-Pop band to have a song debut in the Billboard Top 40.

The BTS Army (the name of the BTS fandom) are likely not the only ones excited about the K-Pop supergroup's SNL debut, as Stone herself confessed back in 2015 that she was "obsessed" with K-Pop music. "It's a global phenomenon," she told Conan O'Brien at the time. "It's beyond excellent. It's the best thing you've ever seen. I don't even know how to describe it, it's just so addictive." Here's hoping they get to do a sketch or two together, so that Stone can live out her K-Pop fangirl dreams.

Meanwhile, Harington's SNL debut the week before won't be quite as history-making, but it will mark the actor's first foray into comedy since starring opposite Andy Samberg in the 2015 tennis mockumentary 7 Days in Hell. "I like comedy. I just like really stupid sh*t," Harington told ScreenRant at the time about his desire to do play more comedic roles. He continued, "You know, I don't want to do something boring and a bit prosaic. Like romantic comedy, that doesn't really interest me at all. I like really farcical stuff ... It's fun. You should have fun with work."

Hopefully, his time hosting Saturday Night Live will show fans a brand new side of Harington — and will let him have plenty of fun after the stressful experience of filming the final season of Game of Thrones.