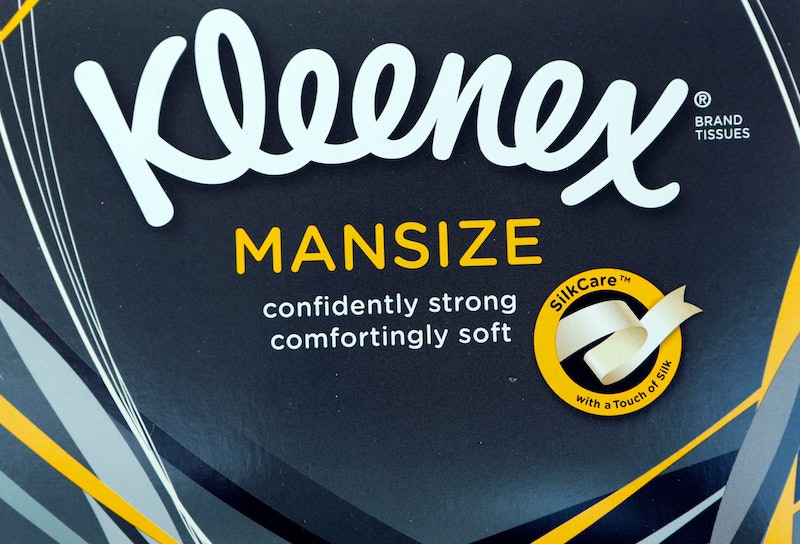 Whats up y'all, it's your girl Aoife with your latest hot shot of feminist news. Yum. So, it looks like the top dog of the tissue world Kleenex is scrapping its mansize tissues. Yes, all you fine quality branded tissue users (absolutely not me) must be absolutely delighted.

The action comes after 60 years of branding that is, let's be honest here, absolutely ridiculous. Even when I was a child, yes I have always been precocious, was like, "OK, hold up what the hell is the point of that?" The branding was supposed to put the tissue forward as strong, large, robust, and sturdy. And do not get it twisted, those are all things I look for, nay covet in a tissue. But those things are only for men, right? Well, if these are only things that men want then OMG what does that make me? Am I living up to a heteronormative fantasy where all lesbians actually want is to be a man? Oh, no honey, I literally have the sniffles and can't even right now.

A spokesman for Kimberly-Clark, which makes Kleenex tissues, wanted to explain where the idea for the name came from when they spoke to The Telegraph. They said: "It was launched at a time when large cotton handkerchiefs were still very popular and Kleenex offered a unique disposable alternative. Despite that our consumer service is registering consistent increase of complaints on gender concern related to Mansize sub-brand."

The spokesperson went on to mansplain, cough, sorry explain that the branding is not meaning to be sexist:

"Kimberly-Clark in no way suggests that being both soft and strong is an exclusively masculine trait, nor do we believe that the Mansize branding suggests or endorses gender inequality."

So, it has decided to rebrand the tissues as 'Extra Large' instead. Now that wasn't too hard was it, babes?

After endless years of swathes of stupidly and needlessly gendered products, it is an absolute joy to see brands actually listening to customers. In recent years, more and more people have been calling out brands for attaching gender stereotypes to products for like, no reason at all.

Ellen Degeneres hilariously called out Bic for its Pens For Her range, which is just as ridiculous as it sounds and absolutely tore them to shreds with lines like: "They don't come with any instructions so how do they expect us to learn to write with them?"

She even made a fake advert in which she put the pens forward as "strong enough for a man, but simple enough that even a woman can understand how to use them."

Kimberly-Clark's decision to rename its tissues from Mansize to Extra Large is definitely a step in the right direction for gender equality. Hopefully other brands will follow and people of all genders — and guys, if you think there are only two then get to reading up because you are wrong— will not feel the pressure and/or anguish of being forced into a box that they have no desire to be put in.