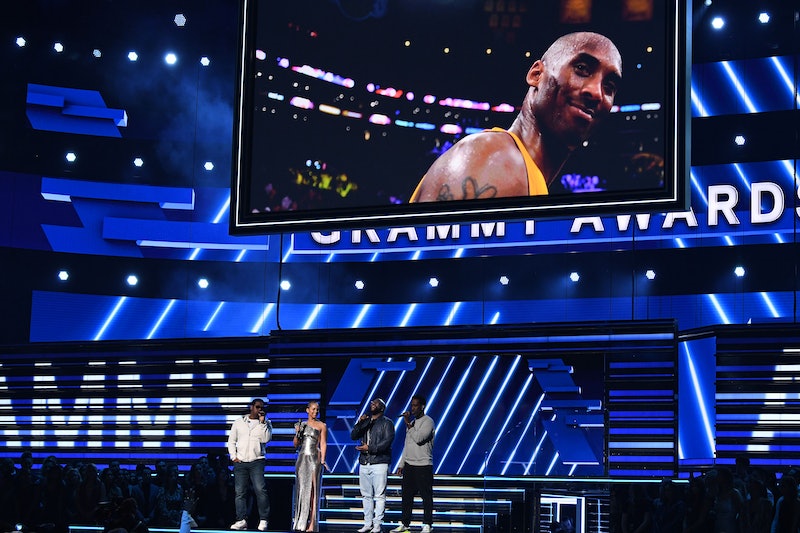 Host Alicia Keys said she "never in a million years" thought she'd have to open the Grammys the way she did. Following the tragic news of his death, Kobe Bryant was honored at the Grammys on Sunday night at the Staples Center — where he'd played for the Los Angeles Lakers throughout his storied 20-year pro career — by everyone from Keys and Lizzo to Lil Nas X and Run-DMC. The basketball legend and his daughter Gianna ("Gigi"), 13, were among those who died in a helicopter crash near Los Angeles on Sunday, Jan. 26. He was 41.

Keys' opening monologue began on a somber note, acknowledging the "crazy sadness" surrounding the "hero's" death. "We're literally standing here heartbroken in the house that Kobe Bryant built," she said. To "describe a tiny bit how we all feel right now," the singer brought Boyz II Men on the stage for a rendition of the group's 1991 hit, "It’s So Hard to Say Goodbye to Yesterday."

Before she kicked off the night's performances, Lizzo dedicated her medley of "Cuz I Love You" and "Truth Hurts," to Bryant, declaring, "Tonight is for Kobe." During the singer's Best Pop Solo Performance acceptance speech, she noted that she realized her stresses leading up to the awards show seemed trivial. Acknowledging that there are "people hurting right now," she added, "Let's continue to reach out, hold each other down and lift each other up."

Later, during a mashup performance of "Walk This Way" with Aerosmith, Run-DMC held up Bryant's Lakers jersey in homage to the late athlete. Lil' Nas X followed suit, beginning his "Old Town Road" performance with Bryant's no. 24 jersey prominently slung over a chair.

Then, to close out the Grammys' Nipsey Hussle tribute from Kirk Franklin, DJ Khaled, John Legend, Meek Mill, Roddy Ricch, and YG, a large photo of Bryant was displayed next to a shot of the late rapper. Khaled, who'd just finished performing "Higher," his and Legend's collaboration with Hussle, shouted out both men, as well as Bryant's daughter, Gigi.

Shortly before the awards show went live, Grammys producers had confirmed to Billboard that they were "working quickly" to add a tribute to Bryant into ceremony. On the red carpet, celebrities, including Common, H.E.R., Khaled, Trevor Noah, Diplo, and Smokey Robinson were among those who memorialized Bryant to E! News host Ryan Seacrest.

Former President Barack Obama was among the many luminaries who had earlier paid tribute to Bryant and Gigi on Twitter. "Kobe was a legend on the court and just getting started in what would have been just as meaningful a second act," he tweeted on Jan. 26. "To lose Gianna is even more heartbreaking to us as parents. Michelle and I send love and prayers to Vanessa and the entire Bryant family on an unthinkable day."