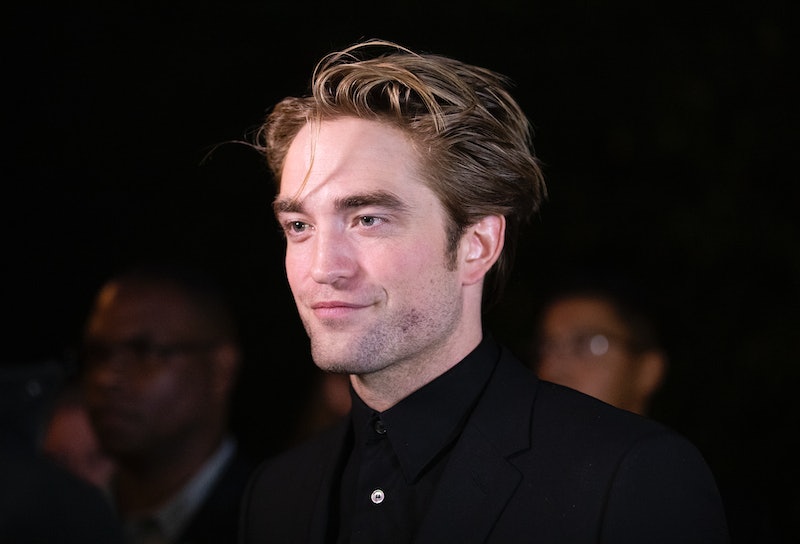 Fans have been crushing on R. Patz ever since he played heart-throb vampire Edward Cullen in the first Twilight film (which, by the way, was eleven years ago). His new 'do in The King recently sent people into a thirst-frenzy yet again, causing some to wonder who Robert Pattinson is dating in 2019. Well, he's incredibly private about his love life — so private, in fact, that he's reportedly been dating someone for a little more than a year now, but the last time they were photographed together was this summer.

Pattinson was first linked to British model Suki Waterhouse back in July 2018 after E! News snapped them on a date in London. A source told the outlet the pair caught Mamma Mia! Here We Go Again at a local theater, then headed to SoHo House for a few drinks. At the end of the night, they reportedly started packing on the PDA while walking home, with an onlooker telling E! they looked "very loved up and close."

Then in August, a source for Us Weekly claimed that Pattinson and Waterhouse had actually "been dating for months" and knew each other for quite some time before things took a romantic turn. Later that month, the Daily Mail reported the pair had split, which definitely didn't appear to be the case come October when they were photographed leaving Chiltern Firehouse together at 2:15 a.m., according to Elle.

Photos of the couple would be few and far between in the months that followed, but every occasional sighting — like when they celebrated Waterhouse's 27th birthday in January 2019, or when they held hands after a run a few weeks later — suggested they were still together. At that point, neither of the stars had publicly discussed their relationship, but Pattinson finally opened up (kind of) during an interview with The Sunday Times in April. When asked about Waterhouse, the star was hesitant to share any details. He did, however, explain why he doesn't like talking about his personal life. "If you let people in, it devalues what love is," Pattinson told the Times. "If you put up a wall it ends up better."

Both he and Waterhouse dated other well-known celebrities in the past, so Pattinson's position on maintaining privacy clearly comes from experience. The actor and his Twilight costar, Kristen Stewart, dated for more than three years before breaking up for good in 2013. In 2014, he started seeing singer FKA Twigs. The couple got engaged the following year, but announced their split in October 2017.

Waterhouse was linked to Bradley Cooper from 2013-2015, then spent the next year casually dating a handful of actors, like Nat Wolff and Richard Madden after their breakup, according to Harper's Bazaar Australia. She was also in a relationship with Diego Luna from 2016-2017, although it's unclear when exactly they split.

Pattinson and Waterhouse were last photographed together this past August, according to E! News. Their lack of public pics doesn't mean they've parted ways, though. A source told E! that the couple makes "time for each other in between their work requirements" and prefers to hang out on the down-low in London.

More like this
Who Is Nick Cannon Dating & How Many Kids Does He Have?
By Jordyn Tilchen and Radhika Menon
Gigi Hadid’s Dad Shared What He Knows About Those Leonardo DiCaprio Rumors
By Brad Witter
We’re Still Not Over Britney Spears & Prince William’s “Cyber” Relationship
By Sam Ramsden and Sophie McEvoy
Hailey Bieber Reacts To Rumors She "Stole" Justin & *That* Selena Gomez Chant
By Radhika Menon
Get Even More From Bustle — Sign Up For The Newsletter