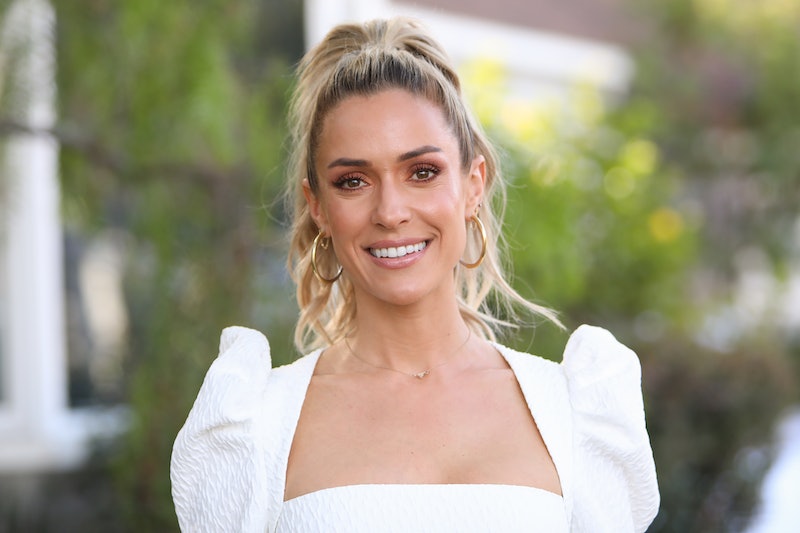 You can move the reality star to Nashville, but you'll never be able to take The Hills out of her heart. Three stars of the iconic early-aughts reality show, Kristin Cavallari, Audrina Patridge and Heidi Montag, had a Hills cast reunion, featuring everything that fans loved about the original show, including a girls' night out and a rehashing of some very old drama. The trio's reconciliation was filmed for Cavallari's E! reality show, Very Cavallari, but the network released a teaser on Friday, Feb. 7, that packs quite a bit of drama into a very short clip.

"You kind of went through that with Lauren," Patridge says to Montag, referencing their former Hills costar and friend, Lauren Conrad. Despite starting the show as best friends, Conrad infamously had a major falling out with Montag after she began dating her now-husband, Spencer Pratt. The drama between the two was chronicled on the reality show before Conrad left The Hills in 2009 after Montag and Pratt's wedding. (She was replaced as the lead by Cavallari, who had appeared with Conrad on Laguna Beach years earlier.)

Talking about their time on The Hills with Patridge and Cavallari, Montag responds that Conrad told her, "'Oh, I don't like Spencer, so,'" which prompted her to respond with a threat to leave the show. "And I said, 'Then I'm off the show,'" Montag claims.

While the reality stars might not have such fond memories about the fights from the original run of The Hills, Cavallari, Patridge and Montag have a lot of love for one another, even all these years later. "We have this bond for life," Cavallari says at one point. "It's a very big deal."

In fact, the Uncommon James founder has such a strong affection for her old friends and costars that she has stated on multiple occasions that she would be happy to make a cameo on The Hills: New Beginnings. Just don't expect her to ever move back to California to become a permanent cast member on the rebooted series: "I don't think I could've gone back to that whole lifestyle," Cavallari told HollywoodLife in June. "As a mom and as a wife — if it was just me and I just had myself to look after, but mentally and emotionally, I could not have gone back to that same place."

Instead, she continued, "I’m going to be able to watch it and enjoy it as a viewer and not emotionally live through it which is the best of both worlds." After spending so much time watching Patridge and Montag on TV, no wonder Cavallari "miss[ed] my old Hills friends," as she says in the Very Cavallari clip.

While being a mother may have prevented Cavallari from joining The Hills: New Beginnings, it is also one of the things that she and Montag have bonded over in recent years. "Heidi has texted me with any and every question about being a mom," Cavallari revealed during an appearance on Watch What Happens Live in July 2018. "I talk to her all the time. She’s doing great."

A lot of things have changed since Cavallari joined The Hills back in 2009, but it's clear that if anything has remained the same, it's the fact that she, Patridge and Montag are still as close as ever.

More like this
Olivia Rodrigo Manifested Finally Meeting Demi Lovato
By Jake Viswanath
Taylor Lautner Copped To Finding Jacob "A Little Annoying" In Twilight
By Stephanie Topacio Long
James Cameron May Come To Regret His 'Titanic' Door Experiment
By Stephanie Topacio Long
Reese Witherspoon Confirms This Fan Favorite Will Return For 'Legally Blonde 3'
By Jake Viswanath
Get Even More From Bustle — Sign Up For The Newsletter
From hair trends to relationship advice, our daily newsletter has everything you need to sound like a person who’s on TikTok, even if you aren’t.