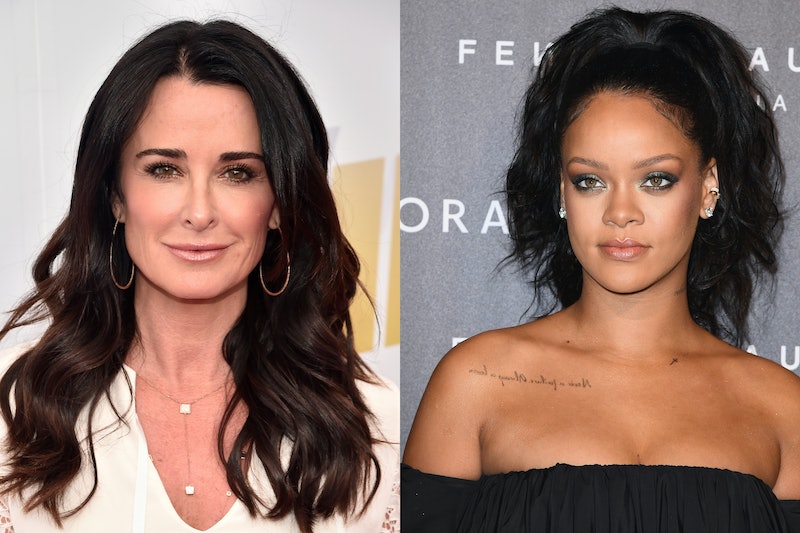 When she isn't busy topping charts, winning Grammys, making her Savage lingerie, and starring in movies like Ocean's 8, Rihanna spends time watching Bravo. She can't get enough. So much so that Rihanna loves Kyle Richards' daughter, according to the Real Housewives of Beverly Hills star. In an interview with the Los Angeles Times published Friday, the reality star dished the fun fact about RiRi, which just goes to show how much the "Work" singer has immersed herself in the network.

Rihanna's name came up when Richards opened up about what it's like to have celebrities watching RHOBH — and being fans of her. "One of my favorite stories is my daughter was at a karaoke place and someone came in and there's like a commotion, like a big entourage," Richards explained. "She turned around and was talking to her friends and then she felt a tap on her shoulder and she turned around and it was Rihanna. And Rihanna goes, 'Oh my God, I'm obsessed with you.' And my daughter started to cry and she goes, 'I'm so confused, what's happening?'"

The Bravolebrity didn't specify which daughter, but it's safe to say it was one of her older girls (she has four). It could've either been 29-year-old Farrah Aldjufrie, 21-year-old Alexia Umanksy, or 18-year-old Sophia Umansky. Seeing as Portia Umansky is only 10, she probably wasn't showcasing her singing skills out at a karaoke place. (Though, there's no doubt Portia would be amazing at it, because, as fans know, she has a big personality.)

Whoever it was, can you imagine having Rihanna tap you on the shoulder and confessing her love for you? Would you cry just like Richards' daughter? Yeah, same.

This isn' the first time Rihanna's Bravo obsession has been uncovered. As Vogue's June cover star, Rihanna confessed her admiration for Lisa Vanderpump. Passionately, she said, "Tell me who is a badder b*tch than Lisa Vanderpump! She’s goals AF!" The 30-year-old talent continued, "She's chic but still funny. She likes to be at home with her husband and then goes and handles her business. Maybe there’s a couple of thousand Birkins in her closet, but she’s still focused. I love that about her."

Before that, she posted an Instagram video of Vanderpump Rules in April. In it, you can hear her laughing at a Season 6 scene featuring Tom Schwartz getting super drunk in Mexico. "Easily the best clip on tv," Rihanna captioned it. "Whoever edited this … we're besties in my head. #vanderpumprules." She's not wrong. It's a memorable Pump Rules moment.

Believe it or not, but Rihanna isn't the only celeb who watches Bravo. Famous person after famous person comes on Watch What Happens Live With Andy Cohen and confesses their obsession. There are even celebs like Chrissy Teigen who tweet about the episodes or mention the shows and the cast members in passing.

Richards said it's "very surreal" when it comes to celebs knowing who she is and liking her. The co-executive producer of American Woman even has a theory about why celebrities watch reality TV, and especially Bravo.

"I think that for celebrities, especially really big celebrities, it's not really fun to go out to dinner or drinks with your friends when you're that famous," she said. "So a lot of them really are home a lot and watching reality television. The biggest celebrity, they're home watching these shows and it's like being a fly on the wall or watching an accident you can't turn away from."

That very well might be the case. It's interesting to see which celebs can't get enough of the Real Housewives, Vanderpump Rules, or Southern Charm, but even more so how much they identify with the stars of the shows — and their families.