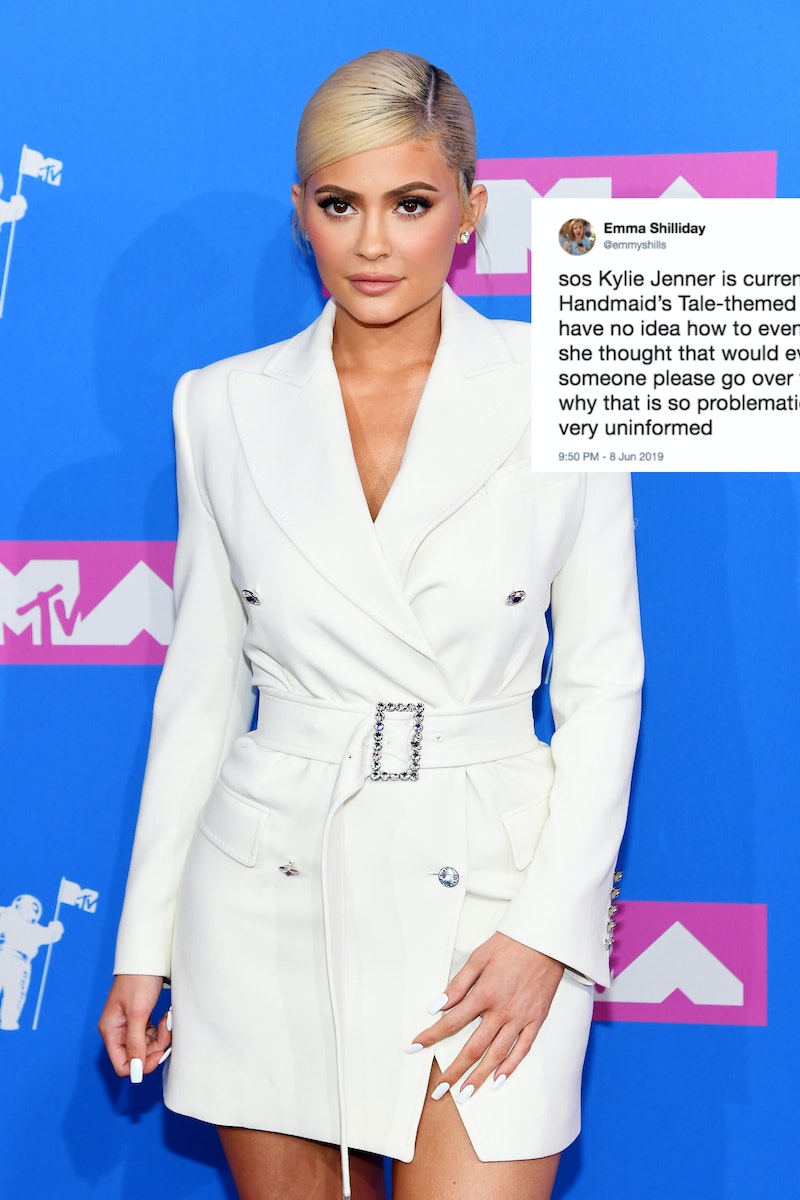 For some of us living in 2019, The Handmaid's Tale hits a little too close to home, but now, a certain lip kit mogul is under fire for not taking the concept of the show seriously enough. Kylie Jenner is getting backlash for the Handmaid's Tale-themed party she threw for her friend's birthday over the weekend, and people are speaking out on Twitter about why the party feels so offensive to them. (Bustle reached out to Jenner’s rep for comment on the backlash, but didn’t receive an immediate response.)

The party took place on Saturday, in honor of her friend, Anastasia "Stassie" Karanikolaou's birthday. Jenner hosted the dinner at her house, complete with Gilead flags, red draperies, and wine glasses with phrases from the show etched on them.

But the decor isn't where the theming stopped — it even extended to what the guests were wearing. It seemed as though when people arrived to the party, they changed into the signature red Handmaid dresses and white bonnets that the characters wear in the show. Sofia Richie shared her transformation on Instagram, and while the costumes aren't entirely screen accurate, they're close to what Offred would be wearing around Gilead, just a bit less modest.

It didn't take long before people took to Twitter to share how inappropriate they found the party, especially considering the way women are treated both in the show and in the real world.

Given the current state of affairs when it comes to women's rights in the United States, it's not surprising that some people found Jenner's party "tone-deaf." Last month, Alabama passed a near-total ban on abortion, criminalizing the procedure at the same time, just days after Georgia passed a bill banning abortion after six weeks. As NPR reported, a total of nine states have made bans on early abortion in 2019 alone, and with these reproductive rights up for debate, many feel that it's a scary time for women in general — similar to what The Handmaid's Tale is all about.

After seeing these kinds of bills pass, it's harder to look at Gilead and think of it as a future that could never happen in real-life America. Women being punished on the show for their sins by being used to continue populating the country, forced to have sex with powerful men who have infertile wives? It doesn't seem that far off when there are women who are now losing control over their own body as several different states have stripped their rights and their choice away from them.

So far, Jenner has yet to respond to the party backlash herself. It makes sense that people would be upset about the theme of Jenner's party at a time when women's reproductive rights are in jeopardy, but it doesn't seem like she meant to offend anyone either. Hopefully, this will be a lesson to everyone about what The Handmaid's Tale actually means to so many of the women who watch it and see similarities between our world and Gilead.

More like this
Kylie Jenner Goes Into Labor & Welcomes Her Baby On 'The Kardashians'
By Jake Viswanath
Mel B Speaks Out Against Domestic Violence In A Powerful Speech
By Sophie McEvoy
Megan Rapinoe's Relaxation Hack Is Super Dreamy
By Carolyn Steber
Everything To Know About Taylor Swift’s 10th Studio Album, 'Midnights'
By Grace Wehniainen and Jake Viswanath
Get Even More From Bustle — Sign Up For The Newsletter