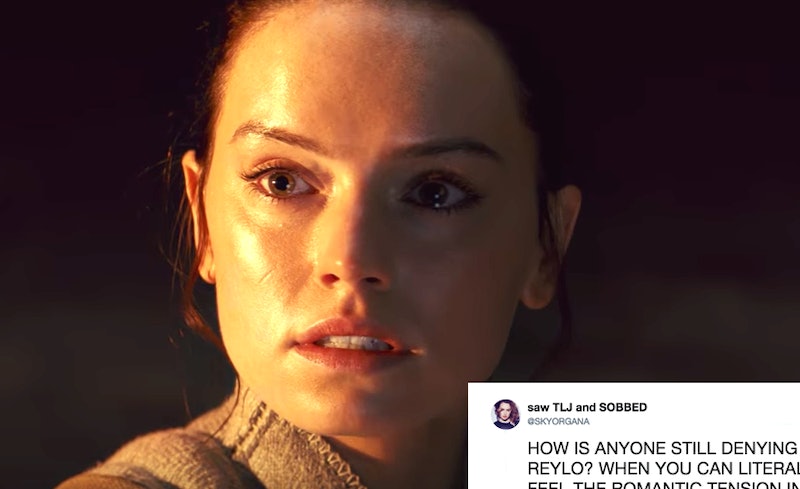 There's a lot to react to in the newest Star Wars movie, but one aspect in particular that has many fans talking is Rey and Kylo Ren's relationship in The Last Jedi. The characters are 'shipped by enough people that the duo has a name: Reylo. But as easy as it is to combine these two characters' names into a romantic portmanteau, their potential pairing hasn't been received with unanimous celebration. Reylo isn't a Star Wars couple, but the fandom is sharply divided over whether they should be or not. And for good reason.

The two first faced off in 2015's The Force Awakens, when their allegiances were more clear. Rey was on the side of the Light, and Kylo was firmly on the side of the Dark, which he proved by attempting to torture Rey on the Starkiller after capturing her. (You know, how all healthy couples start out.) She used the Force and bested him during her first experience with a lightsaber, leaving him scarred both physically and emotionally. For many viewers, this ignited a possibility for a future pairing that was stoked to a flame in The Last Jedi, when Rey and Kylo were quite literally linked by the Force.

They had multiple scenes together throughout the film, one with Kylo shirtless and one including a very sensual hand touch. Everyone's allegiances got a lot more hazy after that — including those of the fans. Some were completely on board with the idea of these two characters providing for each other the comfort and balance that each is seeking. But for every tweet celebrating Reylo, there's someone who got a different set of goosebumps from that prolonged hand touch. Instead of seeing it as the start of something new, some fans felt a creep of dread, remembering the duo's problematic history.

Whether you love them or hate them, there doesn't seem to be a fan who doesn't have some opinion on Reylo, so let's run through some of the biggest.

They're A Perfect, Though Complex, Couple

Luke Skywalker himself said he'd never seen the raw power he'd experienced in Rey in anyone other than Ben Solo. So, in many ways, the two represent a perfect match for each other... assuming you can forget about their past. And some fans have been able to, sharing their enthusiasm for the pairing all over social media in effusive tweets.

They're A Dangerously Toxic Pairing

Many fans of the franchise feel that the relationship is at minimum massively creepy and problematic, and at maximum, toxic, abusive, and downright dangerous. Kylo has tried to kill Rey multiple times, and the only reason he hasn't been successful is because her own massive power is a match for his. If he falls in love with her because of that, and her with him, isn't that a pretty messed up way to start a relationship? A lot of people think so.

And then there are those ambivalent to the pairing because they feel that Rey doesn't need a love interest at all. After all, perhaps if Rey falls for Kylo and the two enter a relationship, it could feel like a minimization of the character fans have been introduced to. We know Rey as a strong, independent, and intelligent woman, who has shown empathy for the Dark-sided Kylo, but not necessarily romantic feelings yet. That's a crucial distinction that means that things could still go either way.

Ultimately, if it is endgame for the two to be together, then Star Wars' creators have some serious 'splainin' to do if they want to mollify the entire fan base. The troubling history of these characters can't be erased, and any relationship between them would be highly controversial, gentle hand touches or not.