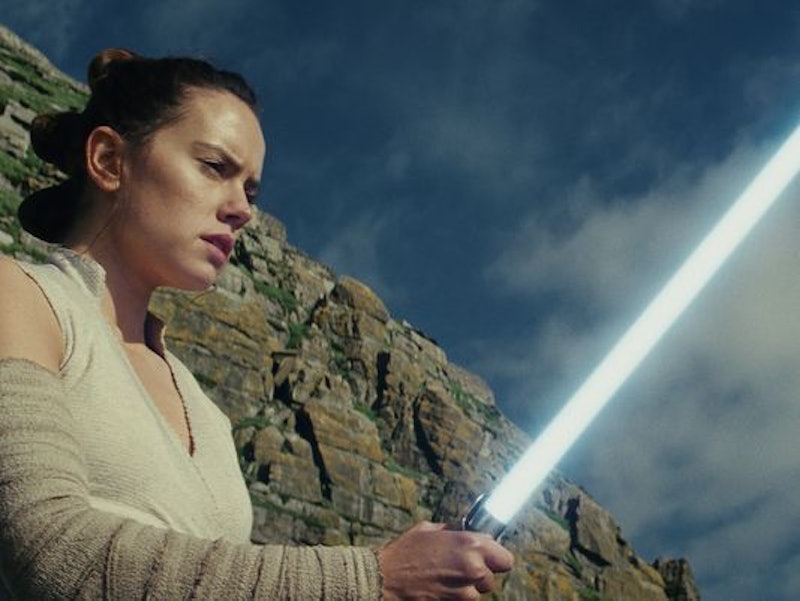 Spoilers ahead for Star Wars: The Last Jedi. The newest trilogy of the Star Wars franchise has been praised for the handling of their female characters' narrative arcs — particularly when it comes to Rey, who is not only a badass, but a rare heroic female lead who is not defined in any way by a romantic relationship. That being said, fans were definitely picking up on a ~vibe~ between Rey and her arch nemesis in the latest installment, leading many to wonder: are Rey and Kylo Ren going to get together after The Last Jedi?

For many fans, this is a conversation that long preceded The Last Jedi. "Reylo," as it is called on Tumblr, is a popular Star Wars 'ship that envisions the two characters together. While many pointed out that there was a very real possibility that Rey was a Skywalker — making that 'ship yet another instance of accidental incest, per Star Wars tradition (eep) — still others were fixated on key details in the iconography of the film. For instance, that he bridal carried Rey onto the ship to the First Order; that there was a dramatic reveal of what I can only describe as "Disney Prince hair"; that even then, filmmakers hinted at a connection between Kylo Ren and Rey that seemed a whole lot more hateful than familial, bringing a passion to the dynamic.

The hints of those tensions were arguably made romantic in The Last Jedi. The "force bond" between Kylo Ren and Rey, while manipulated by Snoke, had an intimate tone in every interaction. The pair of them were always "alone," and had access to the other's private thoughts — enough to evoke an empathy so strong that Rey truly believed she could turn Kylo Ren, and vice versa. The scene where their hands "touch" through the bond had all kinds of forbidden love vibes in it, decidedly punctuated by everyone's awkward uncle Luke interrupting it like he caught two teens going at it under the bleachers. And then there was the, uh, shirtless scene, which would be totally cinematically unnecessary unless the writers were hinting that the tension between them might not just be emotional.

Then, suddenly, all subtlety goes out the window: it's revealed that Rey is not related to Kylo Ren (jury on her parents' actual identities is still out, of course); the two of them team up in an epic battle against Snoke's guards; and Kylo Ren all but pulls a Jupiter Ascending and offers his hand out for Rey to be the queen of his quest for galactic domination. In other words, every gal's dream, right?

Clearly not so much — Rey rejects his offer, and the two of them end the film more divided than ever.

And it's this exchange that pretty much squashes any chance of Rey and Kylo Ren getting "together". There is no doubt that there is a strong (and dangerous) kind of empathy between them. And one could argue that whatever is left of Ben Solo in Kylo Ren really does have romantic feelings for Rey. But the offer he made her wasn't an offer borne of those romantic feelings, if they exist; it was an offer motivated by his desire for power, and to neutralize her as a threat. Rey's compassion may have been her "weakness" when Snoke led her onto the First Order ship, but it was decidedly a strength when she rejected Kylo Ren's offer, understanding what it was at its core. (Not to mention — the "you're not nothing to me" vibes are like peak negging. Learn some new moves, bro.)

All of their exchanges in this film aside, the odds of Rey — or anyone in the galaxy, really — ending up with a guy who's killed a bunch of people in intergalactic genocide is probably super, duper slim, tragic backstory or not.

Poe Dameron, on the other hand? Uh, hello. Fans did not miss the flirty nature of the exchange between them when finally, after two entire films, the two iconic characters finally met; nor did they miss Poe's iconic "I know" answer when Rey introduced herself. Could writers be hinting at a possible relationship between Poe and Rey by calling back to another badass woman and trigger-happy flyboy? Only time — er, two years of it, to be exact — will tell.