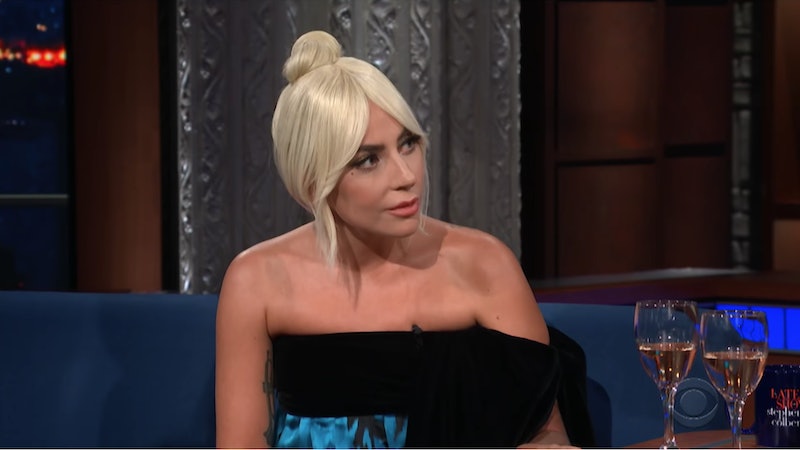 Many celebrities have responded passionately to Dr. Christine Blasey Ford's testimony against Brett Kavanaugh, Donald Trump's Supreme Court nominee. Now, Lady Gaga is calling out President Trump for mocking Dr. Ford at a rally earlier this week. During a Thursday appearance on The Late Show with Stephen Colbert, Gaga gave a powerful message supporting Ford and also provided an explanation for anyone doubting Ford or any sexual assault survivor's memory of an attack. (Kavanaugh has denied the sexual assault allegations made against him by Ford, Deborah Ramirez, and Julie Swetnick.)

"What I have seen on the news with this debate of Kavanaugh versus Dr. Ford, it's one of the most upsetting things I have witnessed," Gaga began. "It's heartbreaking, but I will tell you something, because I am a sexual assault survivor," Gaga continued, while referring to her own rape at the age of 19 that she didn't come forward about until years later.

The A Star Is Born actor then dove into Trump's comments about Ford at a rally in Mississippi on Tuesday, which widely sparked backlash for insensitivity. During his speech, Trump questioned Ford's memory and even imagined dialogue between Ford and the senators at her Senate Judiciary Committee hearing on Sept. 27. Part of his speech went as follows:

For Gaga, what Trump did was completely disrespectful not only to Ford, but all sexual assault survivors, including herself. (As for Trump, White House Press Secretary Sarah Sanders previously claimed the President was "stating facts" at the rally, per CNBC.)

"Trump the other day was speaking at a rally, and he said, 'She has no memory of how she got to the party. Should we trust that she remembers the assault?'" Gaga discussed with Colbert, before adding, "And the answer is 'yes.'"

The singer then went to explain "exactly why" Ford should be believed: "If someone is assaulted or experiences trauma, there's science and scientific proof — it's biology — that people change. The brain changes. What it does is it takes the trauma and it puts it in a box and it files it away and shuts it so that we can survive the pain."

As Gaga noted, there have been multiple studies and cases of how the brain and memories are affected by trauma, in addition to articles about how trauma can cause chronic pain, anxiety, among other issues. Abigail Powers Lott — a clinical psychologist and Assistant Professor in the Department of Psychiatry and Behavioral Sciences, School of Medicine, at Emory University in Atlanta— explained in a piece she wrote for Anxiety. org in September 2016:

"There appears to be a particular connection between trauma and chronic pain. Past studies show that childhood abuse is a risk factor for the development of pain conditions in adulthood. Why this is true remains unclear, although one possibility is that being in a perpetually dangerous environment leads to a heightened stress response. When chronically activated, that stress response can become dysregulated and lead to many negative physical and psychological outcomes later on."

Gaga also reflected on the body's reaction to trauma. "It can cause body pain," she noted. "It can cause baseline elevations in anxiety. It can cause complete avoidance of not wanting to even remember or think about what happened to you."

As for why Ford decided to come forward 30 years later, Gaga theorized,

"But what I believe that I have seen is that when this woman saw that Judge Kavanaugh was going to be possibly put in the highest position of power in the judicial system of this country, she was triggered, and that box opened. And when that box opened, she was brave enough to share it with the world to protect this country."

During Ford's testimony, even she said it was her responsibility to come forward. "I am here today not because I want to be," Ford told the senators. "I am terrified. I am here because I believe it is my civic duty to tell you what happened to me while Brett Kavanaugh and I were in high school."

Like many other celebrities, Gaga has made it clear where she stands and that is with Dr. Ford.