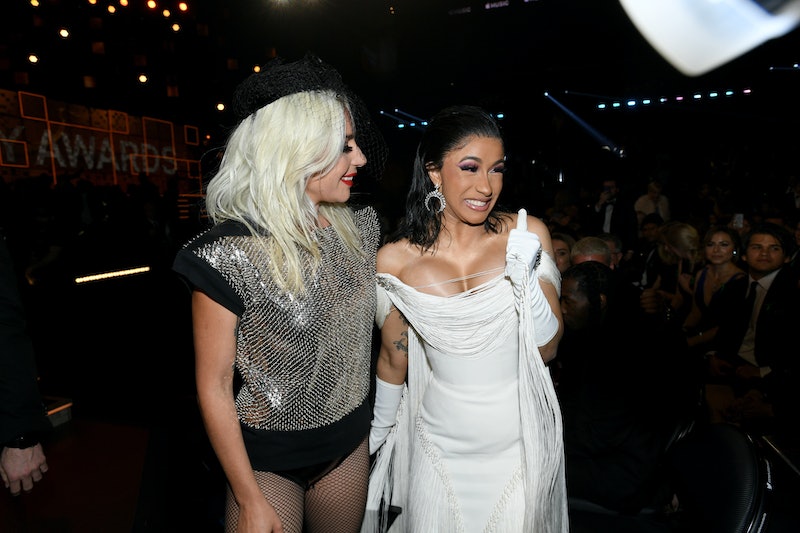 Cardi B should have only been worrying about celebrating her big win as the first-ever solo female artist to earn Best Rap Album at the 2019 Grammys. But after receiving hate on the internet, she deleted her Instagram. Now, Lady Gaga is defending Cardi B following her Grammys win. Mother Monster, who won three awards herself at the Grammys on Feb. 10, took to Twitter on Tuesday to show her support for Cardi.

Cardi almost immediately experienced backlash after her win. Some were quick to pit her against Nicki Minaj, while others were of the opinion that Mac Miller's Swimming should have won (Cardi later announced she was sharing the award with Miller, who died in 2018). But, through it all, Gaga is here and standing by Cardi and her well-deserved win.

Sharing a photo of the two of them from Grammy night, Gaga wrote on Twitter:

"It is so hard to be a woman in this industry. What it takes, how hard we work through the disrespectful challenges, just to make art. I love you Cardi. You deserve your awards. Let's celebrate her fight. Lift her up & honor her. She is brave."

Gaga's tweet came after Cardi B deleted her Instagram account, seemingly in response to all the negative feedback she'd been getting since her win. (Bustle reached out to Cardi, but did not receive a response.) In a now-deleted video shared just before she took down her account, Cardi addressed the criticism, noting how hard she worked on Invasion of Privacy while pregnant with her daughter Kulture. Some fans also took the video as a response to BET's tweet that took a shot at Minaj after Cardi's win. As Deadline reported, the network has since apologized, but it only helped to add fuel to the fire of the alleged feud between Cardi and Minaj. And Cardi's video noted she wants to separate herself from that.

In a similar vein, Lady Gaga's tweet is all about the positivity. As she wrote, Gaga knows firsthand the struggles and lack of respect that women in the music industry, and entertainment industry at large, experience. But the Oscar-nominated actress and singer also pointed out how deserving Cardi B is, and reminded the public that it should be celebrating her accomplishment.

What makes Gaga's show of support even sweeter is that 26-year-old rapper is a self-proclaimed fan. At the 2017 MTV Video Music Awards, Cardi told Billboard that if she could collaborate with anyone, it would be with "one of my idols, definitely gotta be Lady Gaga." An old video of Cardi also surfaced on the internet where she performed "Bad Romance" at her high school talent show. And on Twitter back in 2016, Cardi B wrote, "When I was a teenager lady Gaga changed my life .She inspired me to be myself & be different." It took two years, but Gaga eventually replied, "Love you girl."

While she's off of Instagram currently, Cardi is still on Twitter and has been sharing messages of support from other artists, like Chance the Rapper and fellow female rappers (and Grammy winners) Missy Elliott, Lil' Kim, and Salt N Pepa. So she'll likely see Gaga's post and feel the love.

The "I Like It" rapper has cited Lady Gaga as one of her idols, so this message should be particularly meaningful to Cardi. And if there's anything that can help you tune out the haters, it's seeing your idol back you up.