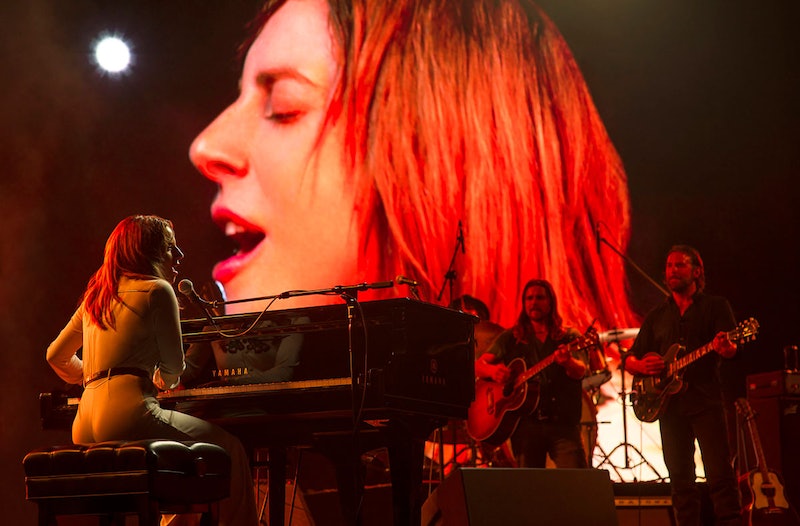 If you, like Jackson Maine, just want to take another look at Ally, you're in luck. Just ahead of the 2019 Golden Globes, a billboard featuring Lady Gaga as Ally from A Star Is Born was spotted in Los Angeles, in the exact same spot that it was erected in the film. The minimalist billboard features a photo of Gaga in character as the aspiring singer, Ally, with her orange hair blowing in her face and just her name written underneath.

The billboard's unveiling is a significant moment in the movie, with Ally and Jackson (Bradley Cooper) celebrating the launch of her pop career by taking in the sight of her face sitting proudly above the Sunset Strip. On Thursday, Jan. 4, fans began posting their sightings of the actual billboard on Twitter, showing off its position outside the famed Chateau Marmont, though New York Times writer Kyle Buchanan noted that the billboard is "a little lower" than it appears in the film.

Gaga's billboard comes during an exciting week for the pop star: In addition to being nominated for Best Actress in a Drama at Sunday's Golden Globes — A Star is Born received five total nominations — she also recently celebrated the first performance of her Las Vegas residency, Enigma. The star-studded opening night was attended by celebrities like Celine Dion, Lisa Vanderpump, and Katy Perry.

The presence of Ally's billboard proves that A Star Is Born has become a cultural phenomenon. Fans from all over the LA area have been flocking to the billboard to visit their favorite pop star and pay homage to Gaga's first starring movie role.

But even with it's massive success, and current awards campaign (see: the giant billboard of Ally), Bradley Cooper recently admitted that he didn't expect his directorial debut to earn the critical and awards acclaim that it did. "I was just hoping that I wouldn't fail miserably," he told Entertainment Tonight.

"It's vulnerable, you know, writing, co-writing, telling a story and directing it. I mean I had no idea what was going to happen. I just knew that I had to try. So, the fact that it has been well received, I just wanna savor it," Cooper said of the film's accolades, which also include an astounding four Grammy nominations for "Shallow," the soundtrack's lead single.

And Cooper isn't the only one overwhelmed by the film's incredible successes — in November, Gaga told Variety that she was touched that her fans have championed the film so hard, saying, "I only want to win now, because I want that kid who feels like me, that misfit or outcast that didn’t belong, to win. The reward for me is that this movie is a win for them."

But though there are many similarities between Gaga and her character — besides, of course, the fact that they both have appeared on billboards — she admitted that it was a struggle to transition from singing to acting in her first starring role. In an interview with Elle, Gaga admitted that she used her insecurities about acting to better step into Ally's shoes, comparing her nerves about starring in a movie to her character's first live performance: “When we sang ‘Shallow’ together at the concert, after he runs over and starts to pull me on the stage, I didn’t think, ‘I haven’t made it yet as a singer.’ All I had to do was go, ‘I haven’t made it yet as an actress,'" Gaga said.

Based on the reaction to A Star is Born, it seems as if many of her fans would agree that Gaga has officially made it as an actress now. And, more importantly, it seems as if Ally has made just as much of an impact on pop culture as she did on Gaga herself.