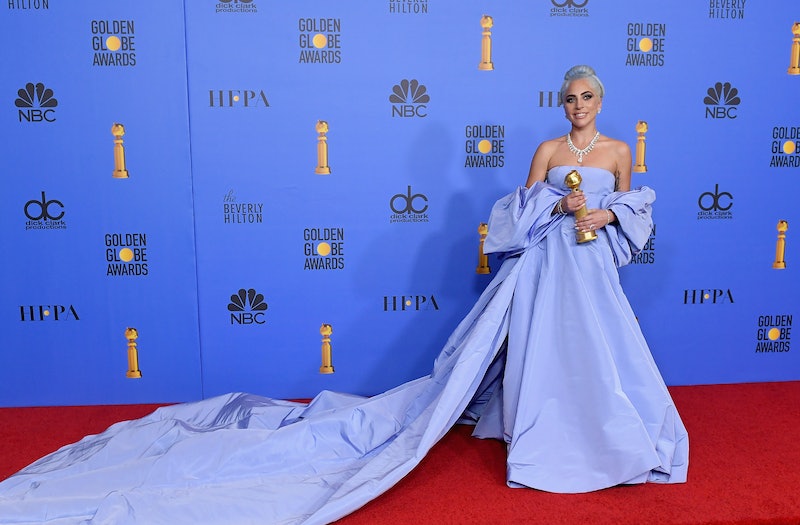 In what will be a surprise to no one, Lady Gaga looked like an absolute dream as she walked the 2019 Golden Globes red carpet. In a stunning lavender ball gown, with matching pastel-colored hair, the A Star Is Born actor absolutely slayed her award show look. But it was Lady Gaga's diamond Tiffany necklace that almost stole the show from her gown! Thankfully, the jewels and gown worked in perfect tandem to create a serious old Hollywood moment a la the original A Star Is Born actress Judy Garland.

But while Lady Gaga's gown was a show-stopper as she walked the red carpet, and her purple locks were a change from her typically platinum hair, those jewels could probably have caused serious damage to your eyes if you were in the wrong lighting — that was major serious bling!

The boldest of all of her jewels had to be the stunning necklace she wore that probably costs more than your entire college education. And as it turns out, the necklace isn't just one she picked out from a line-up. It was actually crafted specifically for Gaga by the artisans at Tiffany & Co. Named the Aurora necklace, it made its debut into the world tonight wrapped around the actor's neck. And I can't even lie, it definitely made my jaw drop.

According to Tiffany, the necklace is made from over 300 sustainably sourced diamonds (yes, you really read that right — 300). And in the center, you'll find a mind-boggling 20 carat pear-shaped diamond that goes perfectly with her extravagant ball gown.

Stylists Sandra Amador and Tom Eerebout, who worked with Gaga to put together her Globes look, knew the look was just right for this remarkable night. "Because this is such a special moment — her first major award show of the season — we wanted the jewelry and dress to complement each other," they explained in press release. "What could be more fitting than this exquisite custom piece, named after the goddess of dawn and a cluster of stars, to mark Lady Gaga's wonderful work in A Star is Born?"

The necklace may have been the largest and most eye catching piece, but it was far from being the only type of bling the singer wore that night. Gaga also wore a collection of three different bracelets from Tiffany & Co that are valued at over $300 alone. Then, there were her diamond earrings set in platinum. Of course, as everyone discovered in 2018, Gaga topped everything off with her stunning pink diamond engagement ring from fiancé Christian Carino.

Chief Artistic Officer for Tiffany, Reed Krakoff, explained that creating Gaga's jewelry for the night was special because like the jewelers trademark iconic store, the talented star is a native New Yorker. "She is a visionary artist who truly exemplifies creativity and iconic style," he said the press release.

So not only did Lady Gaga take home the award for Best Original Song, but she did so in a plethora of Tiffany & Co jewels. How do you have a better night than that?