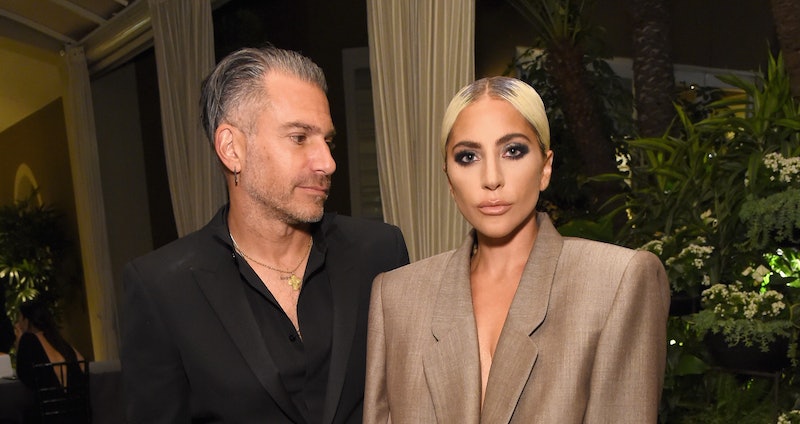 During her Las Vegas residency show on Sunday, Lady Gaga talked about her recent split from Christian Carino for the first time. Per E! News, Gaga referenced the split from her talent agent fiancé before a song, naturally. While the "Born This Way" singer was performing the "Jazz & Piano" portion of her residency on June 2, a song on her set list reportedly inspired memories of Carino.

Before singing Ella Fitzgerald's "Someone to Watch Over Me," Gaga told the audience, "Last time I sang this song, I had a ring on my finger, so it'll be different this time." An audience member confirmed the quote, which is Gaga's first public reference to her February 2019 breakup, to E! News.

Gaga and Carino were first linked back in early 2017, and though it was never confirmed where the pair initially met, Carino's agent status at top agency CAA led many to speculate that the couple met through one of his high-profile clients. In November 2017, Us Weekly reported that Gaga and Carino became engaged, which the "Joanne" singer confirmed in October 2018 while attending the Elle Women in Hollywood event, where she reportedly thanked her "fiancé, Christian," in her speech.

At the beginning of Gaga's awards show appearances for A Star Is Born, Carino attended several events, including the Golden Globes, with his nominated partner. But rumors of a split began to swirl in February when Gaga showed up to the 2019 Grammy Awards sans her engagement ring and didn't thank Carino when she won the Grammy for Best Pop Duo/Group Performance for "Shallow."

Gaga and Carino reportedly called off their engagement shortly after, according to People, news the singer's rep confirmed to the outlet at the time. Per a People source, "It just didn't work out. Relationships sometimes end. There's no long dramatic story."

But, in place of an actual reason for the breakup, fans began to wonder if Gaga's romantic connection with her A Star Is Born co-star Bradley Cooper had bled offscreen as well. The shipping flames were only fanned further after Gaga and Cooper's chemistry-fueled performance at the 2019 Oscars.

However, before fans could get too carried away with theories and vision boards, Gaga denied any romantic relationship on Jimmy Kimmel Live! on February 27. "First of all, social media, quite frankly, is the toilet of the internet and what it's done to pop culture is abysmal," Gaga bluntly began. "People saw love and guess what? That's what we wanted you to see! This is a love song, 'Shallow'. The movie A Star Is Born [is] a love story. We worked so hard. We worked all week on that performance."

Now that the press tour for A Star Is Born is finished, and rumors of a Gaga-Cooper romance along with it, the "Bad Romance" artist can focus on herself post-breakup. According to Carino's Instagram, he spent the weekend with Johnny Depp while Gaga opened up about their breakup in Vegas.

It seems with Gaga's latest reference to Carino, she may be ready to open up about her breakup as she moves forward.