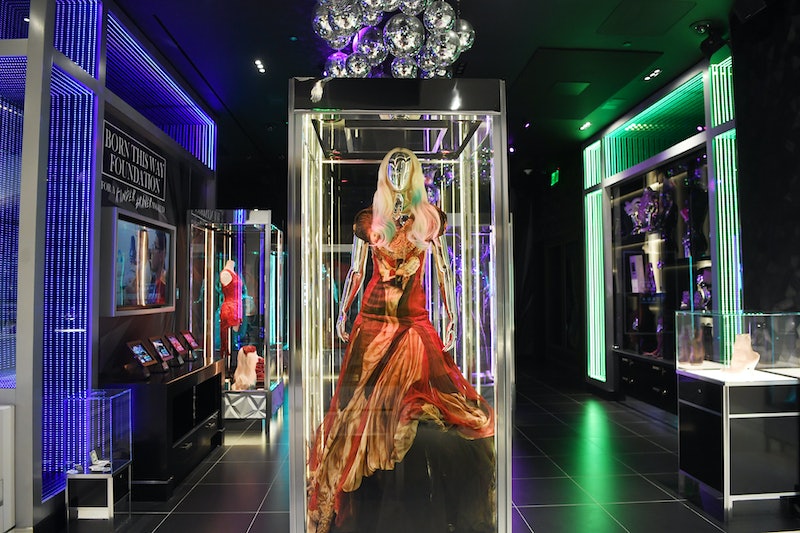 When it comes to living fashion icons, Lady Gaga is certainly a name that would come to most people's minds. From her meat dress to her recent Met Gala looks (four, to be exact), the singer and actor knows how to push boundaries. Now, Lady Gaga's Haus of Gaga Museum will allow you to see some of her most memorable look up close in an homage to this style icon's 10 years of fashion.

In case you didn't already know, Lady Gaga has her very own Las Vegas show called Enigma. The show is beginning its second leg on May 30, and as part of the experience, the Haus of Gaga is opening alongside the show at the Park MGM. The museum will feature looks from Lady Gaga's career including her famous meat dress (which is now kind of a jerky dress thanks to preservation efforts) and her 2017 Super Bowl Versace body suit.

However, don't think you'll only need to see the immersive experience just once. You'll be disappointed if so. The Haus of Gaga is being curated by the A Star Is Born star's longtime collaborator and fashion director Nicola Formichetti who will be curating new activations for the space through the rest of the Enigma run at the Park MGM.

Of the ongoing Haus of Gaga exhibit, Formichetti explains that the experience is about giving fans a more immersive look into Lady Gaga's career. He says in a press release, "Lady Gaga and I wanted this experience to reflect the most iconic moments the Haus of Gaga has conceptualized during her career. Our vision for HAUS OF GAGA/LAS VEGAS is a space that will visually immerse fans into Lady Gaga’s most iconic moments that will leave them in awe."

While the Haus of Gaga museum is for the singer's fans, the exhibit features a charitable side as well. Not only will many of Lady Gaga's iconic looks be on display, but some of them will also be put up for auction. 100% of the proceeds from the auctions will go to the Born This Way Foundation. Fans of the Gaga will be familiar with the charity. It's one the she began with her mother to support the mental health of young people and encourage kindness and bravery in the world.

President of Entertainment & Sports for MGM Resorts International George Kliavkoff says in a press release that MGM is excited to five Lady Gaga's fans an even more immersive experience for Enigma. He also cites the Born This Way foundation as one of the reasons why MGM Resorts is so excited to host the Haus of Gaga exhibit. He explains in a press release, "...we are incredibly pleased with the opportunity to bring even greater awareness to the Born This Way Foundation, doing good for young people around the globe."

If you want to experience the Haus of Gaga museum, the experience opened on May 30 and will extend for the remainder of the Enigma tour and be open on days which Lady Gaga is set to perform. If you've been considering a trip to Las Vegas and are a Lady Gaga fan, now certainly seems like the time to go.